Part I: An Introduction to Paleoanthropology 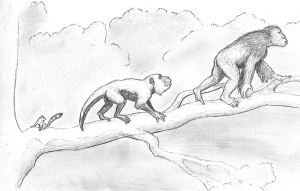 While we have no primate fossil material prior to the Eocene Epoch, the first primates are thought to have evolved prior to the Paleocene Epoch (66–56 mya), possibly as far back as 90 mya, during the Late Cretaceous Period. With the extinction of the dinosaurs at the end of the Cretaceous, many terrestrial niches became available and predation pressures were somewhat relaxed. In addition, temperatures were higher than in the recent past (see Figure 3.2) and the angiosperms (flowering plants) were undergoing an adaptive radiation, i.e. relatively rapid speciation, and spreading globally. The spread of flowering plants resulted in an adaptive radiation of insect pollinators and herbivores (plant-eaters), as well as insectivorous and herbivorous arboreal vertebrates. 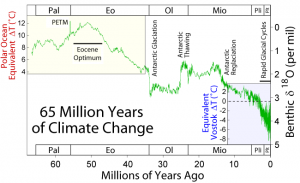 The earliest primates likely descended from a small, nocturnal, insectivorous mammal. The tree shrews and colugos (also known as flying lemurs) are the closest living relatives to primates. The tree shrew is used as a living model for what the earliest primates, or primate predecessors, might have been like. At some point, primates or their ancestors moved into the trees and adapted to an arboreal environment. Two theories regarding the evolution of some primate characteristics, such as grasping or prehensile hands, forward-oriented eyes, and depth perception, are the Arboreal and Visual Predation Theories. The Arboreal Theory posits that primate characteristics, such as grasping hands and feet and the presence of nails instead of claws, are the result of moving into and adapting to an arboreal environment. (Imagine the casualties!) The Visual Predation Theory asserts that characteristics that were well-suited to scurrying around in trees and visual features in particular, such as convergent orbits, are adaptations to insect predation. Short of a butterfly net, grasping hands, visual acuity, and depth perception are essential for catching insects, but I guess they would be kind of handy for using a butterfly net as well! 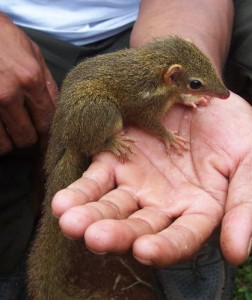 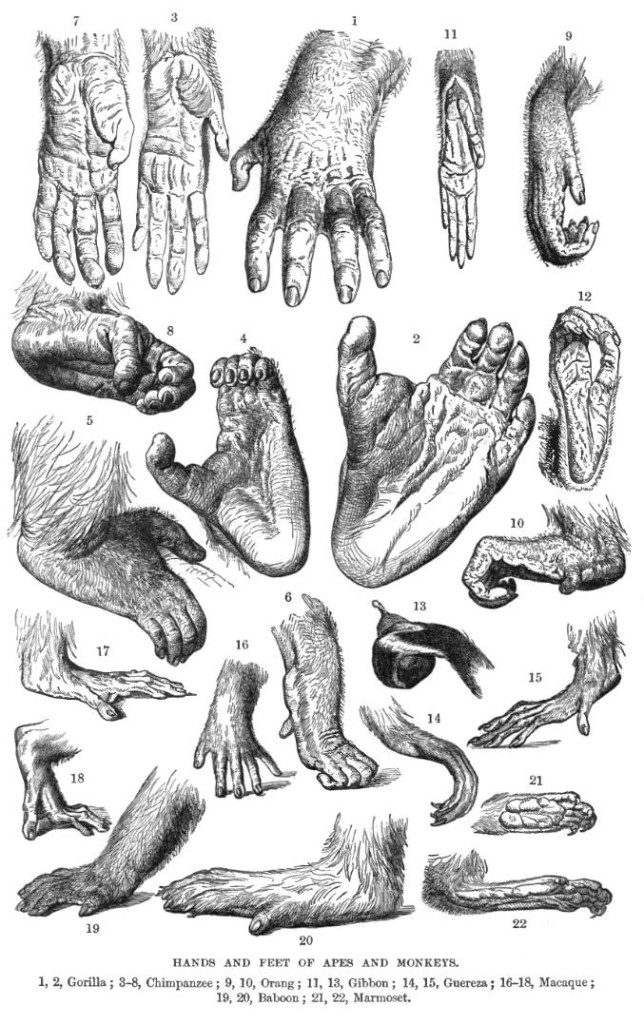 While primates are thought to have evolved in Asia, the majority of the early fossil material is found in North America and Europe, dating to the Eocene Epoch (~56–34 mya). The map in Figure 3.6 indicates both living and fossil strepsirrhine sites. They are divided into two superfamilies, Adapoidea and Omomyoidea. In general, the adapoids were diurnal, lemur-like animals that are thought to be the ancestors of the strepsirrhine primates, i.e. the lemurs of Madagascar and the lorisids of Africa and Southeast Asia (i.e. bushbabies and pottos of Africa and lorises of Southeast Asia) (see Figure 3.7). The smaller, nocturnal omomyoids are good candidates for the ancestors of modern-day tarsiers. However, due to the early dates for ancestral tarsiers, it is possible that the omomyoids and tarsiers were sister lineages. 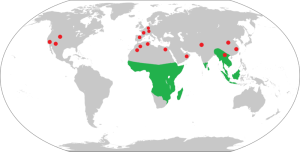 During the Eocene Epoch, the early strepsirrhine-like primates experienced an adaptive radiation and expanded into numerous niches over a broad geographic area. The northern expansion of early primates into Europe and North America was possible because Eurasia and North America were joined as the large landmass known as Laurasia and, as mentioned, it was warm enough for tropical animals to move into northern latitudes. Due to subsequent global cooling, the early primates in North America and Europe eventually went extinct. Strepsirrhine primates spread into Africa after it docked with Laurasia. They are also hypothesized to have “rafted” on floating mats of vegetation to Madagascar, where they evolved into the great diversity of extinct and extant lemur species. 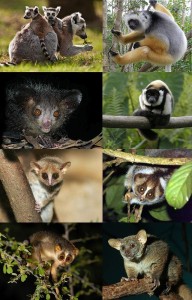 By at least the late Eocene, the first anthropoid primates had evolved. There is debate over the origin of the anthropoids, i.e. the ancestor of the monkeys and apes. There are four different theories of our ancestry, each with its share of supporters: (1) adapoid, (2) omomyoid, (3) tarsier, or (4) independent origin as yet undiscovered. Remains of early anthropoids dating to the late Eocene are found in Africa and Asia. A possible stem or basal anthropoid, meaning the original ancestor of all monkeys and apes, comes from the Shanghuang deposits of China. Termed genus: Eosimias (see Figure 3.8), it was as small as the smallest living anthropoid, the pygmy marmoset monkey of South America. While ring-tailed lemurs have striped tails, I do not know of any other striped primates so am not sure why the artist gave them stripes … but it sure is an intriguing little creature! Other late Eocene fossils have been discovered in Myanmar (genus: Pondaungia), Thailand (genus: Siamopithecus), Libya (genus: Biretia), Algeria, and the Fayum Beds of Egypt.

During the Oligocene Epoch (~34–23 mya), the anthropoid primates underwent a great adaptive radiation. The richest location for Oligocene anthropoid fossils is the Fayum Beds of Egypt. Oligocene anthropoids are divided into three families: Parapithecidae, Oligopithecidae, and Propliopithecidae, from most primitive to most derived over time. The New World monkeys are thought to have branched off from the parapithecids, with which they share some characteristics. Genus: Apidium is a prime contender for a possible ancestor. Once again, a rafting hypothesis is proposed for the migration of that ancestor from Africa to South America.

The ancestors of the Old World monkeys and apes diverged from the family: Propliopithecidae. The propliopithecid, Aegyptopithecus zeuxis (also known as Propliopithecus zeuxis) is thought to be a common ancestor of the ape and Old World monkey lineages (see Figure 3.9). While the earliest anthropoids were more monkey- than ape-like, the apes (or hominoids) were the first to successfully adapt to changing environmental conditions in Africa. 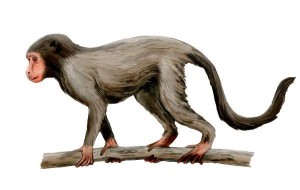 For years, people have asked me, “Barbara, you don’t really believe that we came from monkeys, do you?” and I always answered, “No, we came from apes!” However, our common anthropoid ancestor was more monkey- than ape-like…. So, “YEAH, I suppose I do!”

During the Miocene Epoch (~23–5.3 mya), the adaptive radiation of the apes or hominoids can be observed in the fossil record. The earliest fossils are from Kenya and Uganda. There were 20 or more genera of apes during the Miocene and they exhibited a wide range of body sizes and adaptive strategies. Proconsul is a possible stem ape, dating to ~18 mya (see Figure 3.10 and 3.11). The ancestry of the lesser apes is unclear but they are thought to have branched off 18–16 mya. The great apes diversified and spread from Africa to Asia and Europe. The ancestors of the orangutans, the sivapithecines, moved into western and subsequently eastern Asia. Remains in Turkey have been dated to 14 mya. The largest primate that ever lived, i.e. the now extinct genus: Gigantopithecus (known only from isolated dental and mandibular fragments), also had a sivapithecine ancestry. Dryopithecine apes moved into Europe during the late Miocene. Generally referred to as “dental apes,” due to the scanty remains of jaws and teeth, that evolutionary side branch eventually went extinct due to global cooling, as with the earlier strepsirrhines in the northern latitudes. 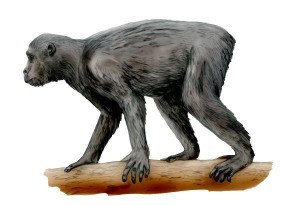 While there were Old World monkeys in the Miocene Epoch, such as genus: Victoriapithecus from Kenya, the adaptive radiation of the Old World monkeys lagged behind the hominoids. However, the same environmental conditions that drove most ape genera to extinction in Africa led to an explosion of monkey species. Monkeys could more quickly adapt due to their shorter life stages and greater number of offspring. A baboon can give birth every two years versus four or five years for gorillas and chimps, respectively. While the leaf-eating ancestor of the colobines stayed in the trees, the ancestor of the cercopithecine or cheek pouch monkeys, such as macaques and baboons, adapted to traveling on the ground as well as in the trees. The ability to exploit both arboreal and terrestrial resources expanded their niche and they survived and thrived in Africa and Asia. With only two extant genera, the African colobines did not diversify to the same extent, having been confined to forests. However, the Asian colobines did not experience the same forest loss as their African cousins did and are thus much more diverse. When African forests later expanded, the ancestors of some cercopithecine species, such as the colorful arboreal guenons, went back to the trees.

It has been difficult to trace the origin of the human/chimp/gorilla lineage during the mid-Miocene due to a paucity of fossils from that time and many conflicting viewpoints. Some of the contenders for the stem African great ape are Nakalipithecus (10 mya) and Samburupithecus (9.5 mya) from Kenya. Other possible ancestors or related species are Afropithecus (18–16 mya) and Nacholapithecus (15 mya) from Kenya and Otavipithecus (13 mya) from Namibia.

The chimp and human lineages are thought to have diverged by the late Miocene. Global cooling in the latter part of the Miocene led to the extinction of all ape genera in northern latitudes. Forest cover in Africa was vastly reduced over time due to climatic fluctuations and while most apes went extinct, the newly emerged hominins thrived. Hominins experienced an adaptive radiation during the Pliocene Epoch (~5.3–2.6 mya), and late in the Pleistocene Epoch (~2.6 mya–11.7 kya) our own species, Homo sapiens, evolved (≤200 kya). 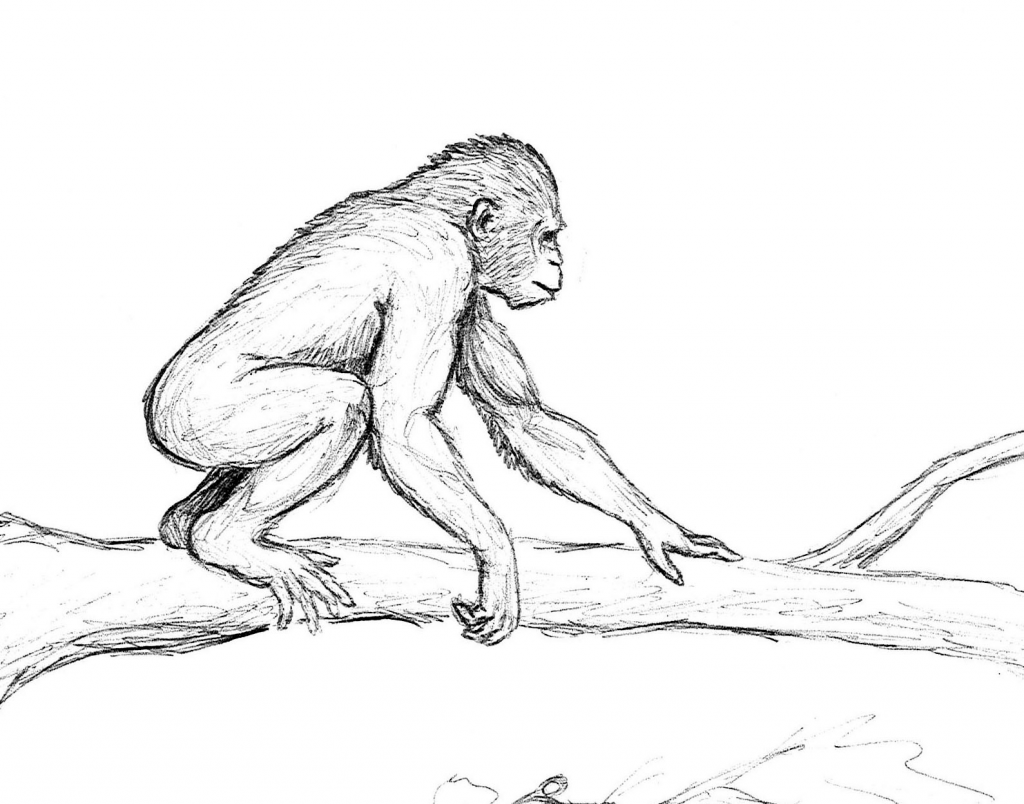