What is Cognitive Dissonance?

In psychology, cognitive dissonance occurs when a person holds contradictory beliefs, ideas, or values, and is typically experienced as psychological stress when they participate in an action that goes against one or more of them. According to this theory, when two actions or ideas are not psychologically consistent with each other, people do all in their power to change them until they become consistent. The discomfort is triggered by the person’s belief clashing with new information perceived, wherein they try to find a way to resolve the contradiction to reduce their discomfort.

In A Theory of Cognitive Dissonance (1957), Leon Festinger proposed that human beings strive for internal psychological consistency to function mentally in the real world. A person who experiences internal inconsistency tends to become psychologically uncomfortable and is motivated to reduce the cognitive dissonance. They tend to make changes to justify the stressful behavior, either by adding new parts to the cognition causing the psychological dissonance (rationalization) or by avoiding circumstances and contradictory information likely to increase the magnitude of the cognitive dissonance (confirmation bias).

Later research documented that only conflicting cognitions that threaten individuals’ positive self-image cause dissonance (Greenwald & Ronis, 1978). Additional research found that dissonance is not only psychologically uncomfortable but also can cause physiological arousal (Croyle & Cooper, 1983) and activate regions of the brain important in emotions and cognitive functioning (van Veen, Krug, Schooler, & Carter, 2009). 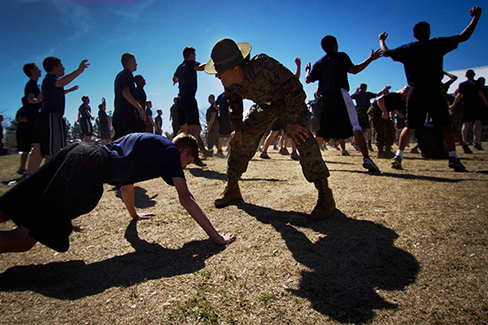 A classic example of cognitive dissonance is John, a 20-year-old who enlists in the military. During boot camp, he is awakened at 5:00 a.m., is chronically sleep-deprived, yelled at, covered in sand flea bites, physically bruised and battered, and mentally exhausted (Figure 2). It gets worse. Recruits that make it to week 11 of boot camp have to do 54 hours of continuous training.

Not surprisingly, John is miserable. No one likes to be miserable. In this type of situation, people can change their beliefs, their attitudes, or their behaviors. The last option, a change of behaviors, is not available to John. He has signed on to the military for four years, and he cannot legally leave.

If John keeps thinking about how miserable he is, it is going to be a very long four years. He will be in a constant state of cognitive dissonance. As an alternative to this misery, John can change his beliefs or attitudes. He can tell himself, “I am becoming stronger, healthier, and sharper. I am learning discipline and how to defend myself and my country. What I am doing is really important.” If this is his belief, he will realize that he is becoming stronger through his challenges. He then will feel better and not experience cognitive dissonance, which is an uncomfortable state.

There is always some degree of dissonance within a person as they go about making decisions, due to the changing quantity and quality of knowledge and wisdom that they gain. The magnitude itself is a subjective measurement since the reports are self relayed, and there is no objective way as yet to get a clear measurement of the level of discomfort

Post-decisional dissonance occurs after making a decision that is irrevocable, or that would be very difficult to reverse. This type of cognitive dissonance occurs in a person faced with a difficult decision when there always exist aspects of the rejected-object that appeal to the chooser. The action of deciding provokes the psychological dissonance consequent to choosing X instead of Y, despite little difference between X and Y; the decision “I chose X” is dissonant with the cognition that “There are some aspects of Y that I like”. The study Choice-induced Preferences in the Absence of Choice: Evidence from a Blind Two-choice Paradigm with Young Children and Capuchin Monkeys (2010) reports similar results in the occurrence of cognitive dissonance in human beings and in animals.

Dissonance that Results from Wanting Something We Can’t Have

With dissonance that results from wanting something we can’t have, there are things we would like to have that we cannot for any number of reasons. When the desired “something” is very important, we may have dissonant cognitions that make us tense and unhappy.

Dissonance as a Result of Inconsistencies of Attitude and Behavior

Dissonance as a result of inconsistencies of attitudes and behavior occurs when there are discrepancies between what we believe and what we do. This discrepancy makes us uncomfortable and stressed.

In the Cognitive Consequences of Forced Compliance (1959), the investigators asked students to spend an hour doing tedious tasks; e.g. turning pegs a quarter-turn, at fixed intervals. The tasks were designed to induce a strong, negative, mental attitude in the subjects. Once the subjects had done the tasks, the experimenters asked some subjects to speak with another new subject about the tasks. Unknown to the subjects, this new subject was actually a confederate (an actor) and part of the research team. The subjects were directed to persuade the confederate that the tedious tasks were interesting and engaging. Subjects of one group were paid twenty dollars ($20) for their participation. Those in a second group were paid only one dollar ($1). The third group, the control group, was not asked to speak with the confederate.

Dissonance due to Inadequate Justification

Dissonance due to inadequate justification occurs when we invest a significant amount of time, energy, money, or effort, but we receive little or nothing in return on the investment. We may feel as if the effort was a waste or that we were cheated out of our payoff.

Dissonance due to Inconsistency between Commitment and Information

The belief contradiction presented in When Prophecy Fails (1956) reported that faith deepened among the members of an apocalyptic religious cult, despite the failed prophecy of an alien spacecraft soon to land on Earth to rescue them from earthly corruption; they believed that only they would survive planetary destruction. At the determined place and time, the cult assembled to await their rescue. yet the spaceship did not arrive. The confounded prophecy caused them cognitive dissonance. They committed to a belief in the prophecy but new information, the aliens not coming, caused them to question their commitment. Had they been victims of a hoax? Had they vainly donated away their material possessions? To resolve the dissonance between their apocalyptic belief and the reality that aliens weren’t coming to save them, most of the cult chose to believe that the aliens had given planet Earth a second chance at existence, which, in turn, empowered them to re-direct their religious cult to environmentalism and social advocacy to end human damage to planet Earth.

Rather than trying to reduce dissonance after it occurs, we may attempt to avoid dissonance through selective exposure. People tend to selectively expose themselves to some information or experiences over others; specifically, they would avoid dissonant messages and prefer consonant messages, Through selective exposure, people actively (and selectively) choose to view, hear, or read that which fits their current state of mind, mood or beliefs. In other words, consumers select attitude-consistent information and avoid attitude-challenging information. This can be applied to media, news, music, and any other messaging channel. The idea is, choosing something that is in opposition to how you feel or believe in will render cognitive dissonance.

For example, a study was done in an elderly home in 1992 on the loneliest residents—those that did not have family or frequent visitors. The residents were shown a series of documentaries: three that featured a “very happy, successful elderly person”, and three that featured an “unhappy, lonely elderly person.” After watching the documentaries, the residents indicated they preferred the media featuring the unhappy, lonely person over the happy person. This can be attested to them feeling lonely, and experience cognitive dissonance watching somebody their age feeling happy and being successful. This study explains how people select media that aligns with their mood, as in selectively exposing themselves to people and experiences they are already experiencing. It is more comfortable to see a movie about a character that is similar to you than to watch one about someone who is your age who is more successful than you.

Another example to note is how people mostly consume media that aligns with their political views. In a study done in 2015, participants were shown “attitudinally consistent, challenging, or politically balanced online news.” Results showed that the participants trusted attitude-consistent news the most out of all the others, regardless of the source. It is evident that the participants actively selected media that aligns with their beliefs rather than opposing media.