How We Develop Communication Theories

Asking important questions is the first step in the process of discovering how communication functions in our world. Tannen’s work grew out of her desire to find out answers to questions about why men and women “can’t seem to communicate,” a commonly held theory by many. As a result of her line of questioning, she has spent a career asking questions and finding answers. Likewise, John Gottman has spent his career researching how married couples can be relationally successful. Both of their findings, and the theories the have developed, often contradict common beliefs about how men and women communicate, as well as long-term romantic relationships.

When we find answers to our questions, we are able to form theories about our communication. Answering our questions helps us develop more sophisticated ways of understanding the communication around us – theories! You may have a theory about how to make friends. You use this theory to guide your behavior, then ask questions to find out if your theory works. The more times you prove that it works, the stronger your theory becomes about making friends. But, how do we know if a theory is good, or not?

Take a moment to compare Newton’s theory of gravity to communication theories. Simply put, Newton theorized that there is a force that draws objects to the earth. We base our physical behaviors on this theory, regardless of how well we understand its complexities. For example, if you hold a pen above a desk and let go, you know that it will fall and hit the desk every time you drop it. In contrast, communication theories change and develop over time (Infante, Rancer & Womack; Kaplan; Kuhn). For example, you might theorize that smiling at someone should produce a smile back. You speculate that this should happen most of the time, but it probably would not surprise you if it does not happen every time. Contrast this to gravity. If you dropped a pen, and it floated, you would likely be very surprised, if not a little bit worried about the state of the world.

Not long ago those concerned about environmental issues were considered minority or fringe groups and, as a result, many of their concerns were dismissed. Yet today environmental concerns have so infiltrated the mainstream that it is now “trendy” to be an environmentalist. Thanks to scientists asking difficult theoretical and practical questions about consumption of scarce resources, awareness about air and water quality, food safety, and global warming has become part of global public discourse and “environmentalism has caught on everywhere.” According to Jackson, “There’s been a paradigm shift in society away from thinking of the Earth as an unending source of resources to instead looking at it as a wider living ecosystem that we are slowly killing. The shift is evident in everything from popular movies to eco-friendly products. From international political treaties regarding environmental policies to waste management strategies within small communities (Jackson).” In fact, evidence has contributed so significantly to theories around global warming that NASA now reports that 97% of climate scientists believe that “climate-warming trends over the past century are very likely due to human activities.”

If communication theories are not 100% consistent, like theories in the physical sciences, why are they useful? This question has initiated a great deal of debate among those who study communication. While there is no definitive answer to this question, there are a number of criteria we use to evaluate the value of communication theories. According to Littlejohn and Foss, scope, parsimony, heuristic value, openness, appropriateness, and validity are starting places for evaluating whether or not a theory is good. 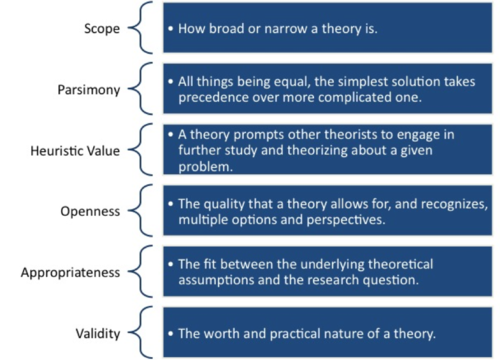 The above criteria serve as a starting point for generating and evaluating theories. As we move into the next section on specific theoretical paradigms, you will see how some of these criteria work. Let’s now turn to look at ways to more easily conceptualize the broad range of communication theories that exist.

One way to simplify the understanding of complex theories is to categorize multiple theories into broader categories, or paradigms. A paradigm is a collection of concepts, values, assumptions, and practices that constitute a way of viewing reality for a community that shares them, especially an intellectual community. According to Kuhn, intellectual revolutions occur when people abandon previously held paradigms for new ones. For example, when Pythagoras in the 6th century B.C. argued the earth was a sphere, rather than flat, he presented a paradigm shift.

In the field of communication there are numerous ways to categorize and understand theoretical paradigms. No single way is more valuable than another, nor is any paradigm complete or better in its coverage of Communication. Instead, paradigms are a way for us to organize a great number of ideas into categories. For our purposes, we’ve divided communication theories into five paradigms that we call the Empirical Laws, Human Rules, Rhetorical, Systems, and Critical Paradigms.