While we’ve examined roles we can play in groups, the role that often gets the most attention is that of the leader. Like defining communication, many people have an idea of what a leader is, but can’t really come up with a good definition for the term as there are many ways to conceptualize the role of leader. One way to do this is to think of leaders in terms of their leadership styles. Let’s look at three broad leadership styles to better understand the communication choices leaders can make, as well as the outcome of such choices, in a group.

First, let’s visualize leadership styles by seeing them as a continuum. The position to the left (Laissez-faire) indicates a leader who exerts little to no control over a group, while the position on the right (Authoritarian) indicates a leader who seeks complete control. The position in the middle (Democratic) is one where a leader maintains a moderate level of control or influence in a group with the group’s permission (Bass & Stogdill; Berkowitz).

While we’ve certainly oversimplified our coverage of the complex nature of group leaders, you should be able to recognize that there are pros and cons to each leadership style depending on context. There is not one right way to be a leader for every group. Effective leaders are able to adapt their leadership style to fit the needs of the group. Furthermore, as a group’s needs and members change over time, leadership styles can accommodate natural changes in the group’s life cycle. Take a moment to think of various group situations in which each leadership style may be the most and the least desirable. What are examples of groups where each style of leadership could be practiced effectively?

Every group in which we participate has a set of norms like we discussed in the “norming” stage. Each group’s rules and norms are different, and we must learn them to be effective participants. Some groups formalize their norms and rules, while others are less formal and more fluid. Norms are the recognized rules of behavior for group members. Norms influence the ways we communicate with other members, and ultimately, the outcome of group participation. Norms are important because, as we highlighted in the “norming” stage of group formation, they are the defining characteristics of groups. 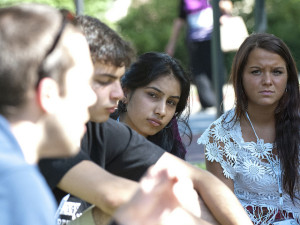 Brilhart and Galanes divide norms into two categories. General norms “direct the behavior of the group as a whole” (130). Meeting times, how meetings run, and the division of tasks are all examples of general norms that groups form and maintain. These norms establish the generally accepted rules of behavior for all group members. The second category of norms is role-specific norms. Role-specific norms “concern individual members with particular roles, such as the designated leader” (130).

Not only are there norms that apply to all members of a group, there are norms that influence the behaviors of each role. Consider our brief discussion on leadership. If a group’s members are self-motivated, and do not need someone imposing structure, they will set a norm that the group leader should act as a laissez-faire or democratic leader rather than an authoritarian leader. Violation of this norm would most likely result in conflict if leaders try to impose their will. A violation like this will send a group back to the “storming” stage to renegotiate the acceptable norms of the group. When norms are violated, group members most often will work to correct the violation to get the group back on task and functioning properly. Have you ever been in a group in which a particular group member did not do the task that was assigned to them? What happened? How did the group handle this situation as a whole? What was the response of the person who did not complete the task? In hindsight, would you have handled it differently? If so, how?

As groups progress through the various stages, and as members engage in the various roles, the group is in a continual process of decision making. Since this is true, it makes sense to ask the question, “How is it that groups make decisions?”