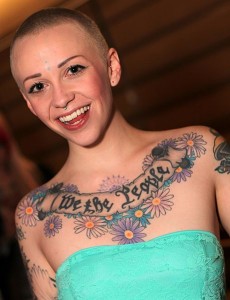 Tattoos, hair style, dress, and makeup are all part of personal appearance.

What sort of nonverbal behaviors do you engage in to let that person know? Likewise, what nonverbal behaviors are you looking for from them to indicate that it’s safe to come over and introduce yourself? We are able to go through exchanges like this using only our nonverbal communication.

Haptics is the study of touch. Touch is the first type of nonverbal communication we experience as humans and is vital to our development and health (Dolin & Booth-Butterfield; Wilson, et al.). Those who don’t have positive touch in their lives are less healthy both mentally and physically than those who experience positive touch. We use touch to share feelings and relational meanings. Hugs, kisses, handshakes, or even playful roughhousing demonstrate relational meanings and indicate relational closeness. In western society, touch is largely reserved for family and romantic relationships. Generally girls and women in same-sex friendships have more liberty to express touch as part of the relationship than men in same-sex friendships. However, despite these unfortunate social taboos, the need for touch is so strong that men are quite sophisticated at finding ways to incorporate this into their friendships in socially acceptable ways. One such example is wrestling among adolescent and young-adult males. Do you ever wonder why you don’t see as many women doing this? Perhaps it’s because wrestling is socially acceptable for men whereas women are more likely to hug, hold hands, and sit touching one another. In contrast, an exchange student from Brazil recognized the differences in touch between cultures when arriving in the United States. She was surprised when someone hesitated to remove an eyelash from her face and apologized for touching her. In her country, no one would hesitate to do this act. She realized how much more physical touch is accepted and even expected in her culture. Cultural norms around touch and gender constructs, and everyone can prevent and limit touching behaviors in ways that are comfortable to them.

Personal Appearance, Objects, and Artifacts are types of nonverbal communication we use on our bodies and surroundings communicate meaning to others. Consider your preferences for hair-style, clothing, jewelry, and automobiles, as well the way you maintain your body. Your choices express meanings to those around you about what you value and the image you wish to put forth. As with most communication, our choices for personal appearance, objects, and artifacts occur within cultural contexts, and are interpreted in light of these contexts. Consider the recent trendiness and popularity of tattoos. While once associated primarily with prison and armed services, tattoos have become mainstream and are used to articulate a variety of personal, political and cultural messages.

Proxemics is the study of how our use of space influences the ways we relate with others. It also demonstrates our relational standing with those around us (May). Edward Hall developed four categories of space we use in the U.S. to form and maintain relationships. Intimate space consists of space that ranges from touch to eighteen inches. We use intimate space with those whom we are close (family members, close friends, and intimate partners). Intimate space is also the context for physical fighting and violence. Personal space ranges from eighteen inches to four feet and is reserved for most conversations with non-intimate others (friends and acquaintances). Social space extends from four to twelve feet and is used for small group interactions such as sitting around a dinner table with others or a group meeting. Public space extends beyond twelve feet and is most often used in public speaking situations. We use space to regulate our verbal communication and communicate relational and social meanings. A fun exercise to do is to go to a public space and observe people. Based on their use of the above categories of space, try to determine what type of relationship the people are in: Romantic, Family, or Friends.

Our environment are nonverbal acts through our use of spaces we occupy like are homes, rooms, cars, or offices. Think of your home, room, automobile, or office space. What meanings can others perceive about you from these spaces? What meanings are you trying to send by how you keep them? Think about spaces you use frequently and the nonverbal meanings they have for you. Most educational institutions intentionally paint classrooms in dull colors. Why? Dull colors on walls have a calming effect, theoretically keeping students from being distracted by bright colors and excessive stimuli. Contrast the environment of a classroom to that of a fast food restaurant. These establishments have bright colors and hard plastic seats and tables. The bright colors generate an upbeat environment, while the hard plastic seats are just uncomfortable enough to keep patrons from staying too long–remember, it’s FAST food (Restaurants See Color As Key Ingredient). People and cultures place different emphasis on the use of space as a way to communicate nonverbally.

Feng Shui, which means wind and water, is the ancient Chinese art of living in harmony with our environment. Feng Shui can be traced as far back as the Banpo dwellings in 4000 BCE. The ideas behind Feng Shui state that how we use our environment and organize our belongings affects the energy flow (chi) of people in that space, and the person/people who created the environment. The inclusion or exclusion, and placement, of various objects in our environments are used to create a positive impact on others. The theory is to use the five elements of metal, wood, water, fire and earth to design a space. Feng Shui is applicable to cities, villages, homes, and public spaces. The Temple of Heaven in Bejing, China is an example of Feng Shui architecture. To keep harmony with the natural world, the Temple houses the Hall of Annual Prayer which is comprised of four inner, 12 middle, and 12 outer pillars representing the four seasons, 12 months, and 12 traditional Chinese hours. 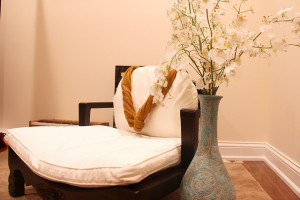 Chronemics is the study of how people use time. Are you someone who is always early or on-time? Or, are you someone who arrives late to most events? Levine believes our use of time communicates a variety of meanings to those around us. Think about the person you know who is most frequently late. How do you describe that person based on their use of time? Now, think about someone else who is always on time. How do you describe that person? Is there a difference? If so, these differences are probably based on their use of time. In the U.S., we place high value on being on time, and respond more positively to people who are punctual. But, in many Arab and Latin American countries, time is used more loosely, and punctuality is not necessarily a goal to achieve. You may have heard the expression, “Indian time” to refer to “the perception of time [that] is circular and flexible” (Harris, Shutiva). This is the belief that activities will commence when everyone is present and ready; not according to an arbitrary schedule based on a clock or calendar. Neither approach is better than the other, but the dissimilar uses of time can create misunderstandings among those from different cultural groups.

Paralanguage is the term we use to describe vocal qualities such as pitch, volume, inflection, rate of speech, and rhythm. While the types of nonverbal communication we’ve discussed so far are non-vocal, some nonverbal communication is actually vocal (noise is produced). How we say words often expresses greater meaning than the actual words themselves. Sarcasm and incongruence are two examples of this. The comedian Stephen Wright bases much of his comedy on his use of paralanguage. He talks in a completely monotone voice throughout his act and frequently makes statements such as, “I’m getting really excited” while using a monotone voice, accompanied by a blank facial expression. The humor lies in the in congruency—his paralanguage and facial expression contradict his verbal message. Watch an example of his humor.

An organization of women called Women in Black uses silence as a form of protest and hope for peace; particularly, peace from war and the unfair treatment of women. Women in Black began in Israel in 1988 by women protesting Israel’s Occupation of the West Bank and Gaza. Women in Black continues to expand and now functions in the United States, England, Italy, Spain, Azerbaijan and Yugoslavia. Women gather in public spaces, dressed in black, and stand in silence for one hour, once a week. Their mission states, “We are silent because mere words cannot express the tragedy that wars and hatred bring. We refuse to add to the cacophony of empty statements that are spoken with the best intentions yet have failed to bring lasting change and understanding, or to the euphemistic jargon of the politicians which has perpetuated misunderstanding and fear that leads to war….our silence is visible.”

Whenever you use sarcasm, your paralanguage is intended to contradict the verbal message you say. As Professors we have found that using sarcasm in the classroom can backfire when students do not pick up our paralinguistic cues and focus primarily on the verbal message. We have learned to use sarcasm sparingly so as not to hurt anyone’s feelings.

Finally, silence serves as a type of nonverbal communication when we do not use words or utterances to convey meanings. Have you ever experienced the “silent treatment” from someone? What meanings did you take from that person’s silence? Silence is powerful because the person using silence may be refusing to engage in communication with you. Likewise, we can use silence to regulate the flow of our conversations. Silence has a variety of meanings and, as with other types of nonverbal communication; context plays an important role for interpreting the meaning of silence. For example, the Day of Silence protest which has taken place every year since 1996 is a day which students use their silence as a tool to get people to stand up for LGBT rights. Here, like in the Women in Black movement, the participants believe that silence sends a louder message than anything they could say. Do you think they are right? What do you think are the advantages and disadvantages of using silence as a political strategy? If you wish to participate or read further, click this link.