Entropy and the Second Law of Thermodynamics

To assess the spontaneity of a process we must use a thermodynamic quantity known as entropy (S). The second law of thermodynamics states that a spontaneous process will increase the entropy of the universe. But what exactly is entropy? Entropy is typically defined as either the level of randomness (or disorder) of a system or a measure of the energy dispersal of the molecules in the system. These definitions can seem a bit vague or unclear when you are first learning thermodynamics, but we will try to clear this up in the following subsections.

The Molecular Interpretation of Entropy

Consider the following system, where two flasks are sealed together and connected by a stopcock (Figure 18.1 “Two-Atom, Double-Flask Diagram”). In this system, we have placed two atoms of gas, one green and one blue. At first, both atoms are contained in only the left flask. When the stopcock is opened, both atoms are free to move around randomly in both flasks. If we were to take snapshots over time, we would see that these atoms can have four possible arrangements. The likelihood of all atoms being found in their original flask, in this case, is only 1 in 4. If we increased the number of atoms, we would see that the probability of finding all of the atoms in the original flask would decrease dramatically following (1/2)n, where n is the number of atoms.

Thus we can say that it is entropically favoured for the gas to spontaneously expand and distribute between the two flasks, because the resulting increase in the number of possible arrangements is an increase in the randomness/disorder of the system. 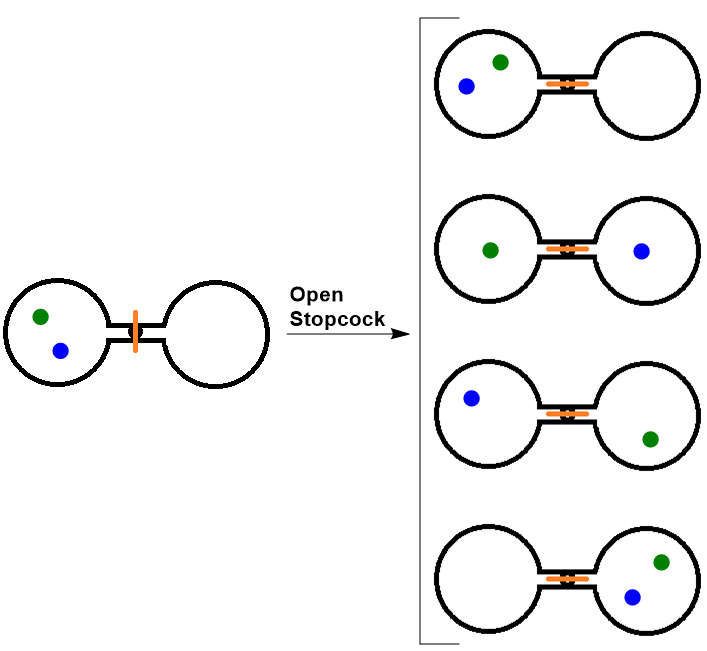 When the stopcock is opened between the flasks, the two atoms can distribute in four possible ways. 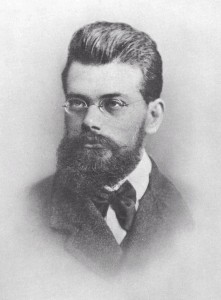 Portrait of Boltzmann at age 31[1]

Ludwig Boltzmann (1844–1906) pioneered the concept that entropy could be calculated by examining the positions and energies of molecules. He developed an equation, known as the Boltzmann equation, which relates entropy to the number of microstates (W):

Microstates is a term used to describe the number of different possible arrangements of molecular position and kinetic energy at a particular thermodynamic state.  A process that gives an increase in the number of microstates therefore increases the entropy.

We can estimate changes in entropy qualitatively for some simple processes using the definition of entropy discussed earlier and incorporating Boltzmann’s concept of microstates.