In gas mixtures, each component in the gas phase can be treated separately. Each component of the mixture shares the same temperature and volume. (Remember that gases expand to fill the volume of their container; gases in a mixture do that as well.) However, each gas has its own pressure. The partial pressure of a gas, Pi, is the pressure that an individual gas in a mixture has. Partial pressures are expressed in torr, millimeters of mercury, or atmospheres like any other gas pressure; however, we use the term pressure when talking about pure gases and the term partial pressure when we are talking about the individual gas components in a mixture.

Although this may seem to be a trivial law, it reinforces the idea that gases behave independently of each other.

Solving for P2, we get

Now we do that same thing for the O2:

The total pressure is the sum of the two resulting partial pressures:

If 0.75 atm of He in a 2.00 L container is connected to a 3.00 L container with 0.35 atm of Ne and the connection between the containers is opened, what is the resulting total pressure?

Hydrogen gas is generated by the reaction of nitric acid and elemental iron. The gas is collected in an inverted 2.00 L container immersed in a pool of water at 22°C. At the end of the collection, the partial pressure inside the container is 733 torr. How many moles of H2 gas were generated?

We solve by subtracting:

Now we can use the ideal gas law to determine the number of moles (remembering to convert the temperature to kelvins, making it 295 K):

All the units cancel except for mol, which is what we are looking for. So

CO2, generated by the decomposition of CaCO3, is collected in a 3.50 L container over water. If the temperature is 50°C and the total pressure inside the container is 833 torr, how many moles of CO2 were generated?

Finally, we introduce a new unit that can be useful, especially for gases. The mole fraction, χi, is the ratio of the number of moles of component i in a mixture divided by the total number of moles in the sample:

(χ is the lowercase Greek letter chi.) Note that mole fraction is not a percentage; its values range from 0 to 1. For example, consider the combination of 4.00 g of He and 5.0 g of Ne. Converting both to moles, we get

The total number of moles is the sum of the two mole amounts:

The mole fractions are simply the ratio of each mole amount to the total number of moles, 1.25 mol:

The sum of the mole fractions equals exactly 1.

This expression allows us to determine mole fractions without calculating the moles of each component directly.

A container has a mixture of He at 0.80 atm and Ne at 0.60 atm. What is the mole fraction of each component?

According to Dalton’s law, the total pressure is the sum of the partial pressures:

The mole fractions are the ratios of the partial pressure of each component to the total pressure:

Again, the sum of the mole fractions is exactly 1.

Carbonated beverages—sodas, beer, sparkling wines—have one thing in common: they have CO2 gas dissolved in them in such sufficient quantities that it affects the drinking experience. Most people find the drinking experience pleasant—indeed, in the United States alone, over 1.5 × 109 gal of soda are consumed each year, which is almost 50 gal per person! This figure does not include other types of carbonated beverages, so the total consumption is probably significantly higher.

All carbonated beverages are made in one of two ways. First, the flat beverage is subjected to a high pressure of CO2 gas, which forces the gas into solution. The carbonated beverage is then packaged in a tightly sealed package (usually a bottle or a can) and sold. When the container is opened, the CO2 pressure is released, resulting in the well-known hiss, and CO2 bubbles come out of solution (Figure 6.5 (Opening a Carbonated Beverage). This must be done with care: if the CO2 comes out too violently, a mess can occur! 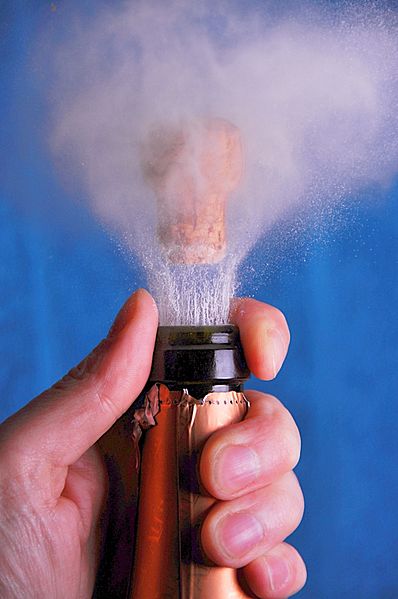 If you are not careful opening a container of a carbonated beverage, you can make a mess as the CO2 comes out of solution suddenly. Source: “Champagne uncorking” by Niels Noordhoek s licensed under the Creative Commons Attribution-Share Alike 3.0 Unported license.

The second way a beverage can become carbonated is by the ingestion of sugar by yeast, which then generates CO2 as a digestion product. This process is called fermentation. The overall reaction is

When this process occurs in a closed container, the CO2 produced dissolves in the liquid, only to be released from solution when the container is opened. Most fine sparkling wines and champagnes are turned into carbonated beverages this way. Less-expensive sparkling wines are made like sodas and beer, with exposure to high pressures of CO2 gas.