1. Be able to state how certain properties of atoms vary based on their relative position on the periodic table.

Many of the periodic properties of atoms depend on electron configuration; in particular, the valence electrons and their level of attraction to the nucleus.

Moving from top to bottom down a column of the periodic table, we might expect the elements to have a similar effective nuclear charge as they all have the same number of valence electrons. However, we actually see a slight increase in Zeff moving down a column of the periodic table. As the principal quantum number (n) increases, the orbital size increases making the core electron clouds more spread out. These core electron clouds that are more diffuse do not screen as well, giving a slight increase to Zeff (Figure 8.22)

The atomic radius is an indication of the size of an atom. Although the concept of a definite radius of an atom is a bit fuzzy, atoms behave as if they have a certain radius. Such radii can be estimated from various experimental techniques, such as the x-ray crystallography of crystals.

As you go down a column of the periodic table, the atomic radii increase. This is because the valence electron shell is getting a larger and there is a larger principal quantum number, so the valence shell lies physically farther away from the nucleus. This trend can be summarized as follows:

where PT stands for periodic table. Going across a row on the periodic table, left to right, the trend is different. This is because although the valence shell maintains the same principal quantum number, the number of protons—and hence the nuclear charge—is increasing as you go across the row. The increasing positive charge leads to a larger effective nuclear charge which casts a tighter grip on the valence electrons, so as you go across the periodic table, the atomic radii decrease. Again, we can summarize this trend as follows:

Figure 8.23 “Atomic Radii Trends on the Periodic Table” shows spheres representing the atoms of the s and p blocks from the periodic table to scale, showing the two trends for the atomic radius. 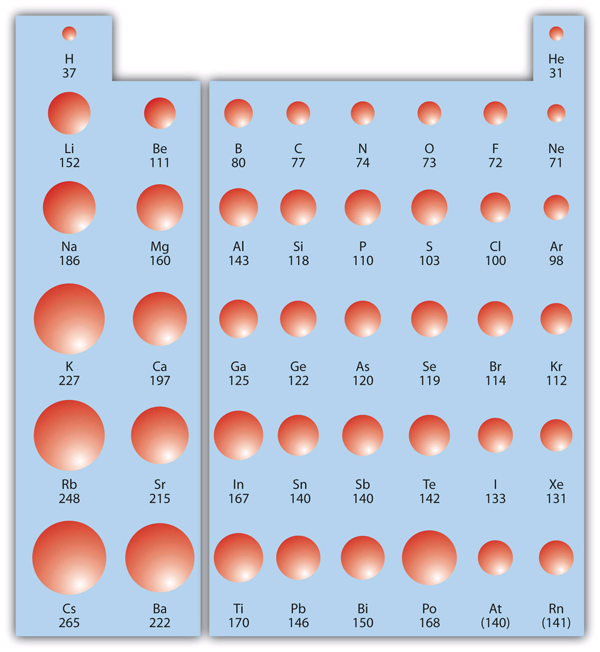 Although there are some reversals in the trend (e.g., see Po in the bottom row), atoms generally get smaller as you go across the periodic table and larger as you go down any one column. Numbers are the radii in pm.

Referring only to a periodic table and not to Figure 8.23 “Atomic Radii Trends on the Periodic Table”, which atom is larger in each pair?

Referring only to a periodic table and not to Figure 8.19 “Atomic Radii Trends on the Periodic Table”, which atom is smaller, Ca or Br?

Ionization energy (IE) is the amount of energy required to remove an electron from an atom in the gas phase:

IE is usually expressed in kJ/mol of atoms. It is always positive because the removal of an electron always requires that energy be put in (i.e., it is endothermic). IE also shows periodic trends. As you go down the periodic table, it becomes easier to remove an electron from an atom (i.e., IE decreases) because the valence electron is farther away from the nucleus. Thus,

However, as you go across the periodic table and the electrons get drawn closer in, it takes more energy to remove an electron; as a result, IE increases: 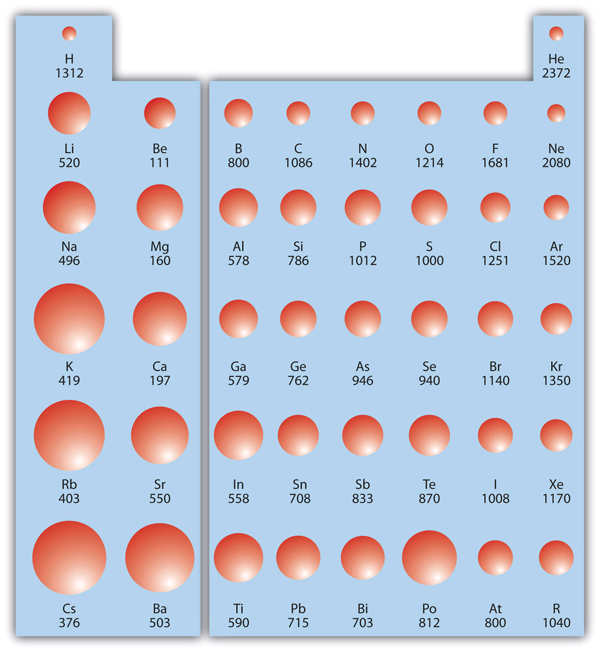 Values are in kJ/mol.

IE also shows an interesting trend within a given atom. This is because more than one IE can be defined by removing successive electrons (if the atom has them to begin with):

Each successive IE is larger than the previous because an electron is being removed from an atom with a progressively larger positive charge. However, IE takes a large jump when a successive ionization goes down into a new shell. For example, the following are the first three IEs for Mg, whose electron configuration is 1s22s22p63s2:

The second IE is twice the first, which is not a surprise: the first IE involves removing an electron from a neutral atom, while the second one involves removing an electron from a positive ion. The third IE, however, is over five times the previous one. Why is it so much larger? Because the first two electrons are removed from the 3s subshell, but the third electron has to be removed from the n = 2 shell (specifically, the 2p subshell, which is lower in energy than the n = 3 shell). Thus, it takes much more energy than just overcoming a larger ionic charge would suggest. It is trends like this that demonstrate that electrons are organized in atoms in groups.

Which atom in each pair has the larger IE?

Which atom has the lower ionization energy, C or F?

The opposite of IE is described by electron affinity (EA), which is the energy change when a gas-phase atom accepts an electron:

EA is also usually expressed in kJ/mol. EA also demonstrates some periodic trends, although they are less obvious than the other periodic trends discussed previously. Generally, as you go across the periodic table, EA increases its magnitude: 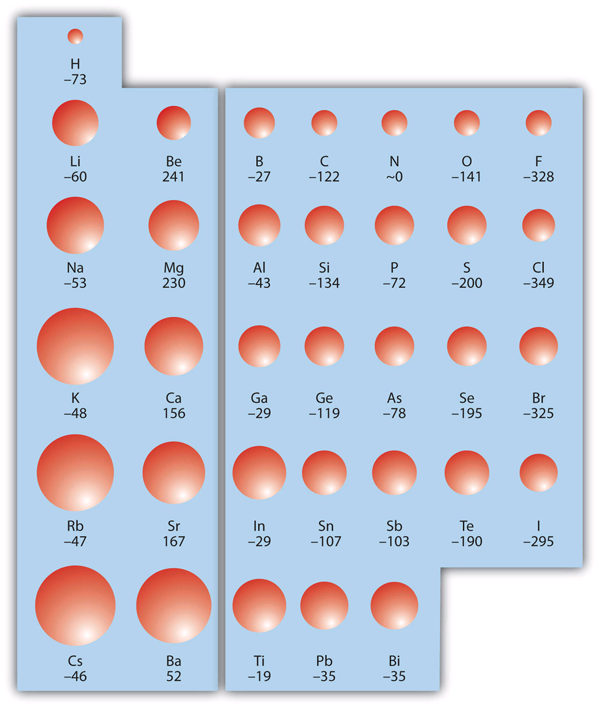 Values are in kJ/mol.

Predict which atom in each pair will have the highest magnitude of EA.

Predict which atom will have the highest magnitude of EA, As or Br.

6.  Which atom of each pair is larger?

7.  Which atom of each pair is larger?

8.  Which atom of each pair is larger?

15.  For which successive IE is there a large jump in IE for Ca?

16.  For which successive IE is there a large jump in IE for Al?

17.  Which atom has the greater magnitude of EA?

18.  Which atom has the greater magnitude of EA?

The third IE shows a large jump in Ca.