There are two fundamental ways of generating light: either heat an object up so hot it glows or pass an electrical current through a sample of matter (usually a gas). Incandescent lights and fluorescent lights generate light via these two methods, respectively.

A hot object gives off a continuum of light. We notice this when the visible portion of the electromagnetic spectrum is passed through a prism: the prism separates light into its constituent colors, and all colors are present in a continuous rainbow (part (a) in Figure 8.3 “Prisms and Light”). This image is known as a continuous spectrum. However, when electricity is passed through a gas and light is emitted and this light is passed though a prism, we see only certain lines of light in the image (part (b) in Figure 8.3 “Prisms and Light”). This image is called a line spectrum. It turns out that every element has its own unique, characteristic line spectrum.

Why does the light emitted from an electrically excited gas have only certain colors, while light given off by hot objects has a continuous spectrum? For a long time, it was not well explained. Particularly simple was the spectrum of hydrogen gas, which could be described easily by an equation; no other element has a spectrum that is so predictable (Figure 8.4 “Hydrogen Spectrum”). Late-nineteenth-century scientists found that the positions of the lines obeyed a pattern given by the equation

The spectrum of hydrogen was particularly simple and could be predicted by a simple mathematical expression.

This means that only certain frequencies (and thus, certain wavelengths) of light are emitted. Figure 8.5 “Bohr’s Model of the Hydrogen Atom” shows a model of the hydrogen atom based on Bohr’s ideas. 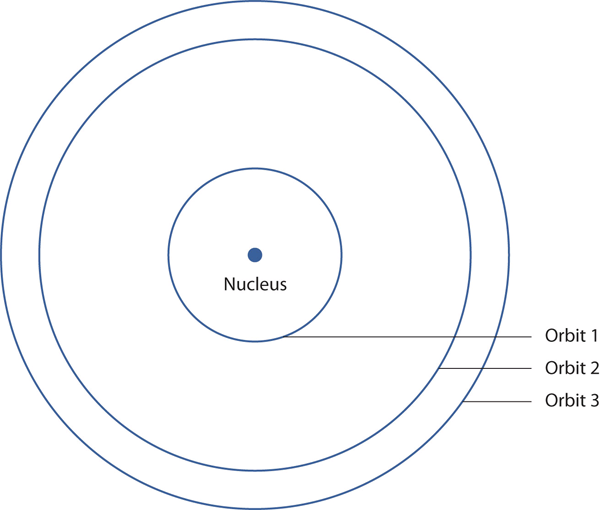 Bohr’s description of the hydrogen atom had specific orbits for the electron, which had quantized energies.

Bohr’s ideas were useful but were applied only to the hydrogen atom. However, later researchers generalized Bohr’s ideas into a new theory called quantum mechanics, which explains the behaviour of electrons as if they were acting as a wave, not as particles. Quantum mechanics predicts two major things: quantized energies for electrons of all atoms (not just hydrogen) and an organization of electrons within atoms. Electrons are no longer thought of as being randomly distributed around a nucleus or restricted to certain orbits (in that regard, Bohr was wrong). Instead, electrons are collected into groups and subgroups that explain much about the chemical behaviour of the atom.

Thus, for a given value of n, there are different possible values of ℓ:

and so forth. Electrons within a shell that have the same value of ℓ are said to occupy a subshell in the atom. Commonly, instead of referring to the numerical value of ℓ, a letter represents the value of ℓ (to help distinguish it from the principal quantum number):

The next quantum number is called the magnetic quantum number, represented by mℓ. (mℓ). For any value of ℓ, there are 2ℓ + 1 possible values of mℓ, ranging from −ℓ to ℓ: 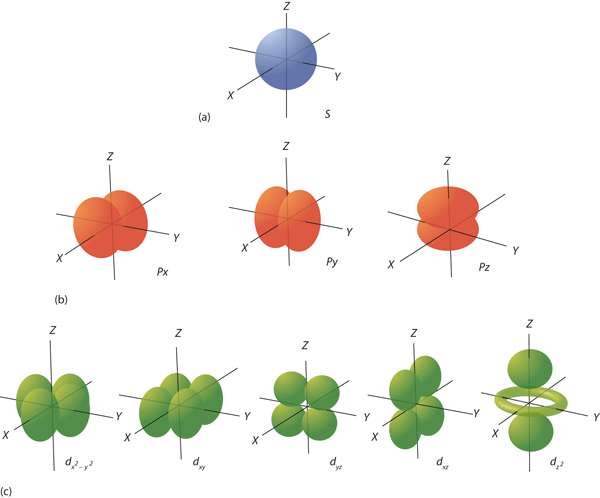 Of the set of quantum numbers {n, ℓ, mℓ, ms}, which are possible and which are not allowed?

Of the set of quantum numbers {n, ℓ, mℓ, ms}, which are possible and which are not allowed?

A neon light is basically an electrified tube with a small amount of gas in it. Electricity excites electrons in the gas atoms, which then give off light as the electrons go back into a lower energy state. However, many so-called “neon” lights don’t contain neon!

Although we know now that a gas discharge gives off only certain colors of light, without a prism or other component to separate the individual light colors, we see a composite of all the colors emitted. It is not unusual for a certain color to predominate. True neon lights, with neon gas in them, have a reddish-orange light due to the large amount of red-, orange-, and yellow-colored light emitted. However, if you use krypton instead of neon, you get a whitish light, while using argon yields a blue-purple light. A light filled with nitrogen gas glows purple, as does a helium lamp. Other gases—and mixtures of gases—emit other colors of light. Ironically, despite its importance in the development of modern electronic theory, hydrogen lamps emit little visible light and are rarely used for illumination purposes. 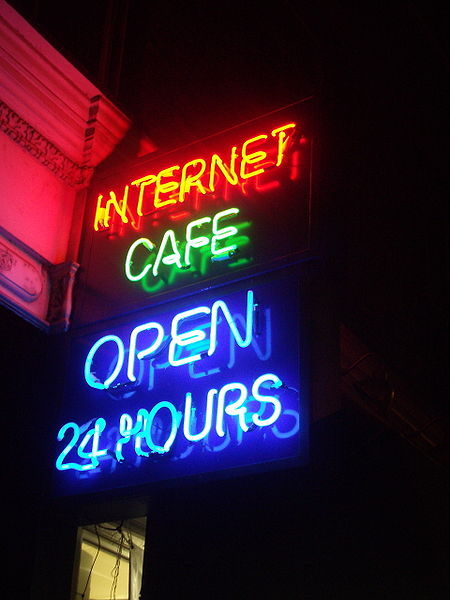 The different colors of these “neon” lights are caused by gases other than neon in the discharge tubes. Source: “Neon Internet Cafe open 24 hours” by JustinC is licensed under the Creative Commons Attribution- Share Alike 2.0 Generic license.

Differentiate between a continuous spectrum and a line spectrum.

What is the wavelength of light from the hydrogen atom spectrum when n = 3?

What is the wavelength of light from the hydrogen atom spectrum when n = 5?

What are the restrictions on the principal quantum number?

What are the restrictions on the angular momentum quantum number?

What are the restrictions on the magnetic quantum number?

What are the restrictions on the spin quantum number?

What are the possible values for ℓ when n = 5?

What are the possible values for ℓ when n = 1?

What are the possible values for mℓ when ℓ = 3?

What are the possible values for mℓ when ℓ = 6?

Describe the shape of an s orbital.

Describe the shape of a p orbital.

Which of these sets of quantum numbers is allowed? If it is not, explain why.

16.  Which of these sets of quantum numbers is allowed? If it is not, explain why.

The principal quantum number is restricted to being a positive whole number.

The absolute value of mℓ must be less than or equal to ℓ: |mℓ| ≤ ℓ.

An s orbital is spherical in shape.

a)  Because |mℓ| must be less than ℓ, this set of quantum numbers is not allowed.