we recognized the equivalences

where ⇔ is the mathematical symbol for “is equivalent to.” In our thermochemical equation, however, we have another quantity—energy change:

This new quantity allows us to add another equivalence to our list:

That is, we can now add an energy amount to the equivalences—the enthalpy change of a balanced chemical reaction. This equivalence can also be used to construct conversion factors so that we can relate enthalpy change to amounts of substances reacted or produced.

Note that these equivalences address a concern. When an amount of energy is listed for a balanced chemical reaction, what amount(s) of reactants or products does it refer to? The answer is that relates to the number of moles of the substance as indicated by its coefficient in the balanced chemical reaction. Thus, 2 mol of H2 are related to −570 kJ, while 1 mol of O2 is related to −570 kJ. This is why the unit on the energy change is kJ, not kJ/mol.

For example, consider the thermochemical equation

The equivalences for this thermochemical equation are

Suppose we asked how much energy is given off when 8.22 mol of H2 react. We would construct a conversion factor between the number of moles of H2 and the energy given off, −184.6 kJ:

The negative sign means that this much energy is given off.

Like any stoichiometric quantity, we can start with energy and determine an amount, rather than the other way around.

if 558 kJ of energy are supplied, what mass of NO can be made?

This time, we start with an amount of energy:

How many grams of N2 will react if 100.0 kJ of energy are supplied?

One very energetic reaction is called the thermite reaction. Its classic reactants are aluminum metal and iron(III) oxide; the reaction produces iron metal and aluminum oxide:

When properly done, the reaction gives off so much energy that the iron product comes off as a liquid. (Iron normally melts at 1,536°C.) If carefully directed, the liquid iron can fill spaces between two or more metal parts and, after it quickly cools, can weld the metal parts together. 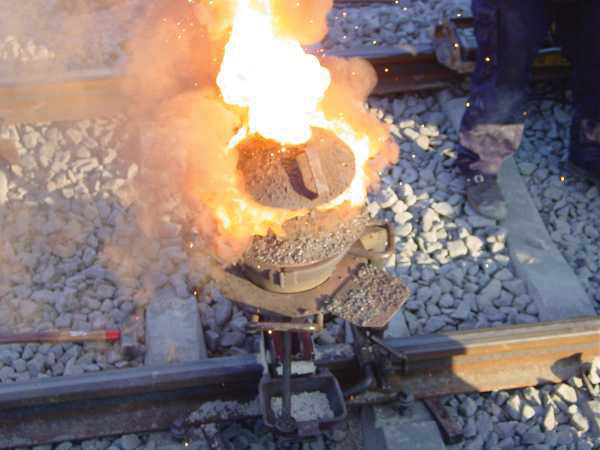 A small clay pot contains a thermite mixture. It is reacting at high temperature in the photo and will eventually produce molten metal to join the railroad tracks below it.