1. Express amounts of radioactivity in a variety of units.

In Chapter 15 “Nuclear Chemistry”, Section 15.2 “Half-Life”, we used mass to indicate the amount of radioactive substance present. This is only one of several units used to express amounts of radiation. Some units describe the number of radioactive events occurring per unit time, while others express the amount of a person’s exposure to radiation.

Perhaps the direct way of reporting radioactivity is the number of radioactive decays per second. One decay per second is called one becquerel (Bq). Even in a small mass of radioactive material, however, there are thousands upon thousands of decays or disintegrations per second. The unit curie (Ci), now defined as 3.7 × 1010 decays/s, was originally defined as the number of decays per second in 1 g of radium. Many radioactive samples have activities that are on the order of microcuries (µCi) or more. Both the becquerel and the curie can be used in place of grams to describe quantities of radioactive material. As an example, the amount of americium in an average smoke detector has an activity of 0.9 µCi. (The curie is named after Polish scientist Marie Curie, who performed some of the initial investigations into radioactive phenomena in the early 1900s; the becquerel is named after Henri Becquerel, who discovered radioactivity in 1896.)

The following table shows the activity of the radium sample over multiple half-lives:

In this case we do not have an exact number of half-lives, so we need to use the more complicated equation (in Chapter 15 “Nuclear Chemistry”, Section 15.2 “Half-Life”) and solve for time. If the initial amount is represented by 16.0 mCi and the final amount is 5.6 mCi, we have

To solve, we divide both sides of the equation by 16.0 mCi to cancel the millicurie units:

The negative sign cancels, and we solve for t. Thus

It makes sense that the time is greater than one half-life (1,600 y) because we have less than one-half of the original activity left.

Other measures of radioactivity are based on the effects it has on living tissue. Radioactivity can transfer energy to tissues in two ways: through the kinetic energy of the particles hitting the tissue and through the electromagnetic energy of the gamma rays being absorbed by the tissue. Either way, the transferred energy—like the thermal energy from boiling water—can damage the tissue.

The rad (an acronym for radiation absorbed dose) is a unit equivalent to 1 g of tissue absorbing 0.01 J:

Another unit of radiation absorption is the gray (Gy):

The rad is more common. To get an idea of the amount of energy this represents, consider that the absorption of 1 rad by 70,000 g of water (approximately the same mass as a 150 lb person) would increase the temperature of the water by only 0.002°C. This may not seem like a lot, but it is enough energy to break about 1 × 1021 molecular C–C bonds in a person’s body. That amount of damage would not be desirable.

Predicting the effects of radiation is complicated by the fact that different types of emissions affect various tissues differently. To quantify these effects, the unit rem (an acronym for röntgen equivalent man) is defined as

where factor is a number greater than or equal to 1 that takes into account the type of radioactive emission and sometimes the type of tissue being exposed. For beta particles, the factor equals 1. For alpha particles striking most tissues, the factor is 10, but for eye tissue the factor is 30. Most radioactive emissions that people are exposed to are on the order of a few dozen millirems (mrem) or less; a medical X-ray is about 20 mrem. A sievert (Sv) is a related unit and is defined as 100 rem.

What is a person’s annual exposure to radioactivity and radiation? Table 15.3 “Average Annual Radiation Exposure (Approximate)” lists the sources and annual amounts of radiation exposure. It may surprise you to learn that fully 82% of the radioactivity and radiation exposure we receive is from natural sources—sources we cannot avoid. Fully 10% of the exposure comes from our own bodies—largely from carbon-14 and potassium-40.

Table 15.4 Effects of Short-Term Exposure to Radioactivity and Radiation

One of the simplest ways of detecting radioactivity is by using a piece of photographic film embedded in a badge or a pen. On a regular basis, the film is developed and checked for exposure. Comparing the exposure level of the film with a set of standard exposures indicates the amount of radiation a person was exposed to.

Another means of detecting radioactivity is an electrical device called a Geiger counter (Figure 15.2 “Detecting Radioactivity”). It contains a gas-filled chamber with a thin membrane on one end that allows radiation emitted from radioactive nuclei to enter the chamber and knock electrons off atoms of gas (usually argon). The presence of electrons and positively charged ions causes a small current, which is detected by the Geiger counter and converted to a signal on a meter or, commonly, an audio circuit to produce an audible “click.” 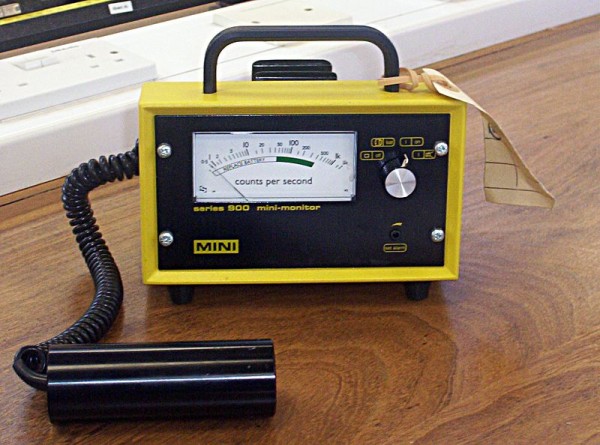 A Geiger counter is a common instrument used to detect radioactivity.
Source: “Geiger counter” by Boffy B is licensed under the Creative Commons Attribution-Share Alike 3.0 Unported license.

a unit of radioactive exposure equal to 0.01 J of energy per gram of tissue

by using a film badge, which is exposed by the radiation, or a Geiger counter

Radioactive atoms in the body, most terrestrial sources, cosmic sources, and nuclear energy sources are likely unavoidable, which is about 27% of the total
exposure. If exposure to radon gas is added, the total unavoidable exposure increases to 82%.

Film is exposed by the radiation. The more radiation film is subjected to, the more exposed it becomes.