A social structure is a set of long-lasting social relationships, practices and institutions that can be difficult to see at work in our daily lives. They are intangible social relations, but work much in the same way as structures we can see: buildings and skeletal systems are two examples. The human body is structured by bones; that is to say that the rest of our bodies’ organs and vessels are where they are because bones provide the structure upon which these other things can reside. Structures limit possibility, but they are not fundamentally unchangeable. For instance, our bones may deteriorate over time, suffer acute injuries, or be affected by disease, but they never spontaneously change location or disappear into thin air. Such is the way with social structures. 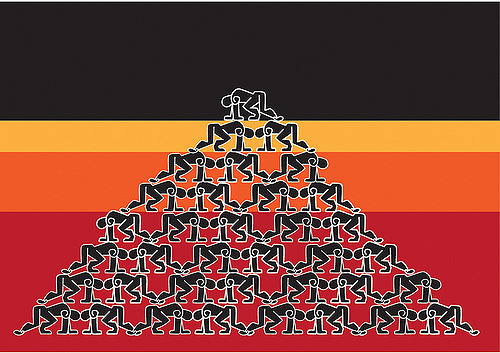 “Social Structure” by Shane is licensed under CC BY-SA 4.0

The elements of a social structure, the parts of social life that direct possible actions, are the institutions of society. These will be addressed in more detail later, but for now social institutions may be understood to include: the government, work, education, family, law, media, and medicine, among others. To say these institutions direct, or structure, possible social action, means that within the confines of these spaces there are rules, norms, and procedures that limit what actions are possible. For instance, family is a concept near and dear to most, but historically and culturally family forms have been highly specified, that is structured. According to Dorothy Smith (1993), the standard North American family (or, SNAF) includes two heterosexually-married parents and one or more biologically-related children. It also includes a division of labor in which the husband/father earns a larger income and the wife/mother takes responsibility for most of the care-taking and childrearing. Although families vary in all sorts of ways, this is the norm to which they are most often compared. Thus, while we may consider our pets, friends, and lovers as family, the state, the legal system, and the media do not affirm these possibilities in the way they affirm the SNAF. In turn, when most people think of who is in their family, the normative notion of parents and children structures who they consider.

Overlaying these social structures are structures of power. By power we mean two things: 1) access to and through the various social institutions mentioned above, and 2) processes of privileging, normalizing, and valuing certain identities over others. This definition of power highlights the structural, institutional nature of power, while also highlighting the ways in which culture works in the creation and privileging of certain categories of people. Power in American society is organized along the axes of gender, race, class, sexuality, ability, age, nation, and religious identities. Some identities are more highly valued, or more normalized, than others—typically because they are contrasted to identities thought to be less valuable or less “normal.” Thus, identities are not only descriptors of individuals, but grant a certain amount of collective access to the institutions of social life. This is not to say, for instance, that all white people are alike and wield the same amount of power over all people of color. It does mean that white, middle-class women as a group tend to hold more social power than middle-class women of color. This is where the concept of intersectionality is key. All individuals have multiple aspects of identity, and simultaneously experience some privileges due to their socially valued identity statuses and disadvantages due to their devalued identity statuses. Thus a white, heterosexual middle-class woman may be disadvantaged compared to a white middle-class man, but she may experience advantages in different contexts in relation to a black, heterosexual middle-class woman, or a white, heterosexual working-class man, or a white lesbian upper-class woman. 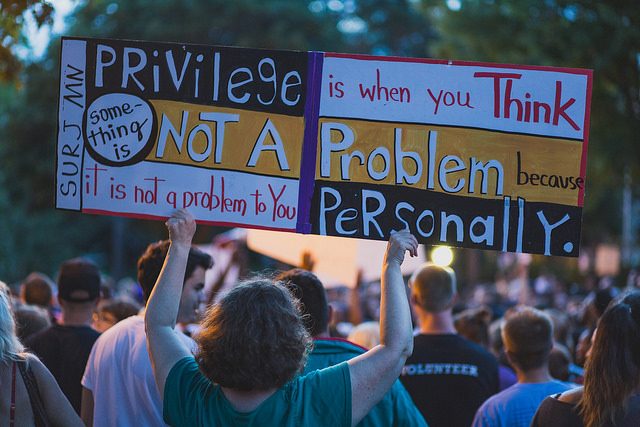 At the higher level of social structure, we can see that some people have greater access to resources and institutionalized power across the board than do others. Sexism is the term we use for discrimination and blocked access women face. Genderism describes discrimination and blocked access that transgender people face. Racism describes discrimination and blocked access on the basis of race, which is based on socially-constructed meanings rather than biological differences. Classism describes discrimination on the basis of social class, or blocked access to material wealth and social status. Ableism describes discrimination on the basis of physical, mental, or emotional impairment or blocked access to the fulfillment of needs and in particular, full participation in social life. These “-isms” reflect dominant cultural notions that women, trans people, people of color, poor people, and disabled people are inferior to men, non-trans people, white people, middle- and upper-class people, and non-disabled people. Yet, the “-isms” are greater than individuals’ prejudice against women, trans people, people of color, the poor, and disabled people. For instance, in the founding of the United States the institutions of social life, including work, law, education, and the like, were built to benefit wealthy, white men since at the time these were, by law, the only real “citizens” of the country. Although these institutions have significantly changed over time in response to social movements and more progressive cultural shifts, their sexist, genderist, racist, classist, and ableist structures continue to persist in different forms today. Similar-sounding to “-isms,” the language of “-ization,” such as in “racialization” is used to highlight the formation or processes by which these forms of difference have been given meaning and power (Omi and Winant 1986). (See further discussion on this process in the section below on social construction).

Just like the human body’s skeletal structure, social structures are not immutable, or completely resistant to change. Social movements mobilized on the basis of identities have fought for increased equality and changed the structures of society, in the US and abroad, over time. However, these struggles do not change society overnight; some struggles last decades, centuries, or remain always unfinished. The structures and institutions of social life change slowly, but they can and do change based on the concerted efforts of individuals, social movements and social institutions.