2. Reading Literature as a Critic

Irony is all about noticing contrast.  No noticing by you = inaccurate interpretations.

Verbal irony occurs when the intended meaning and the stated meaning are different—and usually opposite.  Huh?  Let me clarify.  Irony is when the connotation is the opposite of the denotation.  Connotations are the contexts, the situations and feelings around a word.  Denotations are the dictionary definitions surrounding a word.

When these don’t match up, a space is created.  You see that space, and you react to it by giving that situation meaning.

Irony is like sarcasm.  For example, if I said “That’s a Great tie” to someone with an extremely ugly tie, you would hear the tone in which I said it, right?  You could look up “Great” in the dictionary and find that it means good, admirable, wonderful, etc.  But “good” is opposite of the usage, right?  I mean, I said it so he’d see it was ugly and bad.  Some critics dispute this connection between sarcasm and irony.

How to Approach Irony

Ask questions about irony.  Use the term in your discussions and your papers.

Do you think you’ll see irony in the works we’ll read?  Will it be used in the same ways?

If irony is the difference between the stated meaning and the intended meaning, then is it used by all cultures?

Dramatic irony arises when an audience knows more about a situation than the character(s).  The characters say or do something whose significance they don’t know.  For example, you go to Oedipus the King knowing that he has married his mom.  You know this, he doesn’t.  So, as he discovers this, you watch and appreciate it.

Situational irony would result from a gapping—a difference—between what readers expect and what actually occurs.  This is not to be confused with the popular misconception that irony occurs when something surprising or coincidental occurs.  (Think of that 90s song by Alanis Morrissette, “Isn’t it Ironic?” which actually featured nonexamples of irony.  Now that’s ironic!) 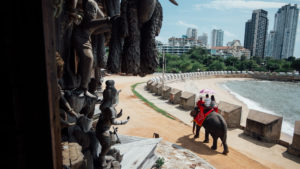 The Irony” by Jack Sirichumsaeng is licensed under CC BY 2.0