The Gothic in Literature

Note this definition by Claire Kahane from The Mother Tongue: Essays in Psychoanalytic Interpretation from our talks about the Gothic:

Within an imprisoning structure, a protagonist, typically a young woman whose mother has died, is compelled to seek out the center of a mystery, while vague and usually sexual threats to her person from some powerful male figure hover on the periphery of her consciousness.  Following clues that pull her onward and inward—bloodstains, mysterious sounds—she penetrates the obscure recesses of a vast labyrinthean space and discovers a secret room sealed off by its association with death. (334)

At first glance, you might not think that this novella is Gothic.  It’s not literally filled with death, there are no graveyards, and the boat isn’t literally a ghost ship!  Looking further at how this narrative includes Gothic elements, though, we can see it fits the structure aptly.

Well, is Melville doing that “Gothic thing” in her story?  Kinda?  Sorta?  Let’s look at how he uses the pattern and innovates upon it.  Remember, when did we say that the Gothic got started?  Oh, that’s right, around 1790.  This is much later, but then again the Gothic is incredibly popular even today. 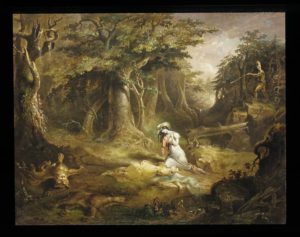 “Leatherstocking’s Rescue” by John Quidor (1801–1881) via The Metropolitan Museum of Art is licensed under CC0 1.0

Tip: Look up the works of an artist such as John Quidor to gauge how closely they fit the Gothic.  Do the same with artists or even movies and television programs you enjoy.