Here are Some Dos and Don’ts Graders Think Through

What we want and what we get are often wildly variant.  Adults all know this.  Even so, I can be surprised by some combinations of elements sometimes.  That’s why I like to troubleshoot papers with you beforehand!

Problem: Paragraphs lacking topic sentences.  These work in fiction, but not in explicit writing like ours.  Even if it is not first, the topic sentence ought to be connected in obvious ways to your claim.  We often defer to sources here or have paragraphs which only exist in the paper because of a source.  It should be that the supporting role fits what you do, not vice versa.

One source for the first or last third (or any third) of a paper is a problem.  We often see such overuse of one source: Great source?  Great!  Not great, however, if that source is the only voice in the paper or if, when it is used, the writer never questions it.  Think of how ventriloquists’ dummies only exist to parrot the words of someone else: 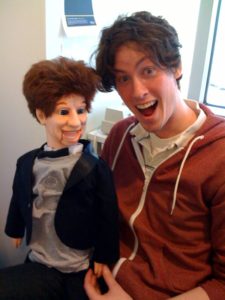 “Me and the office ventriloquist dummy” by TJ Ryan is licensed under CC BY 2.0

Definitions which get plagiarized, unused, treated as impressive, or passed off as if they are unbiased are likely to backfire, turning a possibly-good move into a definitely-bad move.  I’m not phased by statistics–particularly if the writer fails to quote properly, doesn’t look at the fact that the sample size was seventeen people paid by the company, or if the “citizens’ group” spouting them turns out to be a hate group with a nice-sounding name or if that source actually ripped them off from a second source.  As Mark Twain stated aptly, there are “lies, damned lies, and statistics.”

Long quotes?  They are often areas where summaries would work better, be shorter, and might actually receive interpretation.  Filler long quotes nearly never get interpreted.  Look at it as I do: the more a quote drones on, the more expectation it sets up that I would get something for it–some interpretation, anything!  (I mean, people get free vacations in our country for sitting through two-day seminars . . .  they obviously got something from the long setup.)  We only quote if it’s well-worded, the strongly-held opinion of a thinker, or a thought at variance with the widely-held opinion in that field of study.  Otherwise, summarize or paraphrase.

Examples can often be scarce, appearing only by page six.  By then, it’s too late for readers.  Don’t overuse or under use examples.  According to the Goldilocks Principle, there has to be a “just right” zone for source use, detail, even sentence and word length.

Lastly, the new game is to play with formatting.  I know the trick of putting the punctuation in 16-point font to puff the piece.  I have seen papers go from 10 to 3 pages because of ridiculous formatting tricks.  That time is best spent writing, in my opinion.  Some people have plagiarized by throwing in a source’s bibliography and citations, figuring I wouldn’t check or couldn’t see that move.  That’s another bad one, since plagiarism requires that we look at intent and it takes intent to do something like that.

I hope that helps!