Part 6: Style and the Writing Process

Early assignments in most writing courses feature passive writing.  By this, I mean writers are quoting rather than interpreting much.

There are only three reasons we’d ever quote: We cannot state the words better, they are the strongly-held opinion of an expert, or they are a statement differing from widely-held belief in that field of study.

Instead of quoting and moving on as if something has happened, paraphrase.  It is the default source use, not quoting.  Paraphrasing well is a skill, as one must reword and reorder. Unfortunately, most students only think to reword.  That can lead to mosaic plagiarism.

As with any source use, treat quotes as excuses for argument.  Surround them with signal phrases before and interpretation after.  Readers are more interested in your use of the material than in the material itself.

Beginning or ending paragraphs on quotes, then, can be problematic because it’s so passive.

Whether we quote, paraphrase, or summarize, it is important to set up the cited material with a signal phrase and to interpret it after the in-text citation.  Treat your ideas as professors do: Your points are more important than the source ideas.  If we placed you on a see saw opposite the source, which would weigh more (and thus be able to hold the other up in the air before dropping them)?

This is a strange point, but hopefully memorable: Your ideas matter most, with the support backing what you bring to the writing situation. 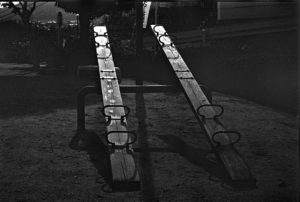 “see saw seen” by jmettraux is licensed under CC BY 2.0

Being this active as a writer may be the opposite of what you were taught in eighth grade; in college, the expectations are different.