Part 6: Style and the Writing Process

Since writer’s block and the internal editor can undercut our best efforts, use the following tips to get started in drafting.  Of course, you have preferred prewriting techniques that lead up to this point.  The OWL Excelsior Writing Lab cover those prewriting approaches.

Get a physical location where you can work without too many distractions.  Some writers listen to music.  Some cannot write if listening to music with any words.  It all depends on what works for you.  Be aware of this.

Like any skill, writing takes some warm-up.  The first twenty minutes of one’s writing may produce mostly junk with a few usable sentences or ideas.  Save your files rather than overwriting everything so that you can mine the prewriting for later ideas.  Often, I have located ideas for future projects in these scrap files.  While starting the writing, ignore your internal editor who is telling you where semicolons should appear!  Just write.  After several minutes, it is likely that you will stop “writing like one talks,” which is what I am doing here!

To avoid writer’s block, make yourself believe you have written a lot.  Use 14 point font here to fill the page more easily.  (This is a trick I have used successfully in completing 50,000-word novels each November in the National Novel Writing Month contest.

Cite as you write so that you never have to go back and, forensically, figure out “What was.”  Figuring out what you took after the fact is not how we should approach writing.

Use a prewriting technique like clustering, freewriting, asking reporters’ questions, or listing.

Read the work aloud.  By going back to your work or reading it aloud, you can get a sense of the voice.  You’ll see and hear what’s missing or which ideas feature too much coverage (overdwelling).  I often use one color of highlighting to indicate where something isn’t well worded and another color for areas where I could add more interpretation or detail.  Again, use a system that works for you.  Writers don’t want to stop themselves repeatedly while drafting, but a quick right-click and highlight can be useful during editing.  Similarly, know the keyboard shortcuts so that the writing process isn’t interrupted.

Even when drafting, work at the beginnings and endings of paragraphs.  Consider adding transitions between ideas and paragraphs.  To see an example of drafting in action, look through the following three slides on drafting from OWL Excelsior, clicking “Next” at the bottom of each page to proceed.

The thesis is a provable opinion, so it should be something others could disagree with.  It may only occur to you late in the writing process, but one had best have a good idea of the audience and purpose stated on the assignment sheet before even starting.

Make sure your major paragraph topics (your major reasons for support) are included in the wording of the thesis.  Work out the thesis later on.  For now, concentrate on fresh writing, communicating things in new ways.

If the assignment sheet requires three full pages for the final copy, draft slightly more than this so that you have flexibility when editing.  However, if sources are called for, it is often best to draft one’s ideas first and then fit in the cited material later on.

There is no set way to draft.  Again, do what works for you.  Some writers must have a thesis before writing anything else.  For others, the claim is nearly the last thing they create, since they prefer to put together reasoning and see where it leads.  Try different prewriting approaches and be aware of what sort of writer you tend to be.

This last idea is important: Writing, you are a writer.  Using others’ ideas as support, you are more important than either the ideas or the other writers, however famous they may be.   Take oneself seriously as a thinker, then. 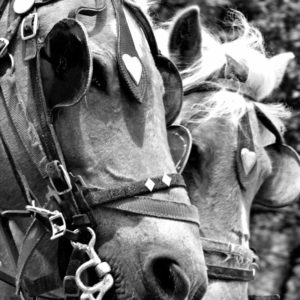 “Blinders” by Sean Hurley is licensed under CC BY 2.0

Strong topic sentences are a key.  Include topic sentences and use these to check that everything else in the paragraph fits the promise of the topic sentence.  However, do not get so fixated on the wording of topic sentences that you fail to say anything different from what you though you were supposed to.  Then you become like the horse with the blinders above. . .  only going where you are led because other sensory input is being denied.  Drafts. . .  horses. . .  very punny.  This is a key point.  Often, the best major ideas appear on their own within a paragraph and become different paragraph reasons.
Licenses and Attributions
CC licensed content, Original