Upon completion of this chapter students will:

Representations of the past, like those produced by archaeologists, have the potential to lend the illusion of time depth, and thus cultural legitimacy, to contemporary social phenomena” (Perry & Joyce, 2005).

The word “archaeology” is derived from the Greek words “arkhaios,” which means “ancient” and “logos” which refers to “study.” Archaeology is generally defined as the study of the human past using material evidence (i.e., physical things as diverse as pottery or pollen). In North America, archaeology is typically a subdiscipline of anthropology along with cultural anthropology, linguistics, and bioanthropology. Archaeologists focus on the prehistoric (i.e. pre-literate) past, while historians study the literate past, but historical records are sometimes used in archeology so these fields overlap. The origins of archaeology are themselves archaeological since we know that ancient people across the world collected artifacts from periods that preceded them. For example, the Aztecs of Mexico collected objects from the earlier site of Teotihuacan, while officials in the Chinese Song Empire excavated, cataloged, and studied ancient artifacts from their own culture.

The current discipline of archaeology developed out of antiquarianism which has roots as early as 15th century interest in ancient Rome, but is most closely associated with the collection of ancient objects in the 19th century. These included objects related to sex and sexuality, many of which were placed in collections of erotica like the “Secretum” at the British Museum and, for objects from Pompeii and Herculaneum, in the “Gabinetto Segreto” of the Naples Archaeological Museum. Until relatively recently these sorts of collections were typically privately-owned or restricted from public view in various ways, showing the discomfort that scholars and the public have had in addressing issues of gender and sexuality in open and systematic ways. 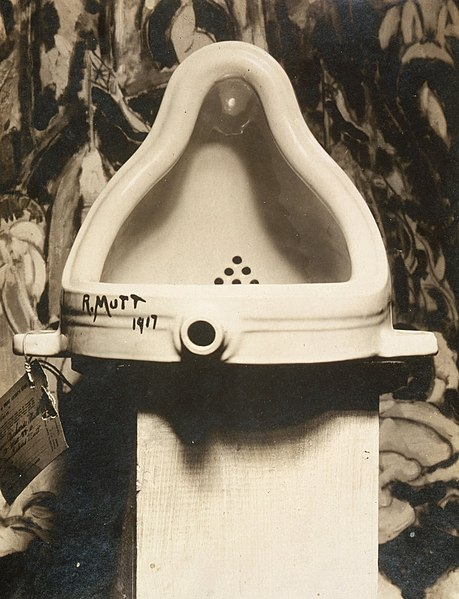 The artist Marcel DuChamp created controversy in 1917 by submitting a mass-produced urinal for an art exhibit.  The context changed its meaning from “plumbing” to “art.”

The use of physical evidence to reconstruct the past is challenging because things can have multiple meanings to different people, or mean different things in different contexts. In 1917, the artist Marcel Duchamp placed an ordinary, mass-produced urinal in an art exhibit and that new context changed its meaning from a functional, everyday object to a work of art. Similarly, cows are ordinary animals in North America and Europe, but in India they are sacred. Thus, archaeologists must interpret things in their respective cultural contexts to understand them. This can be difficult because the context may be unknown (e.g. looted artifacts), inadequately excavated (e.g., due to time or funding constraints), or drastically changed by time (e.g., weather, erosion, etc.). Even when we have texts that relate to the artifacts, those texts may not address the issues with which we’re concerned. For example, ancient Maya hieroglyphic writing describes politics and ritual, but not sex and sexuality. We also cannot ask the people who made or used archaeological objects what they meant. Although we can ask their descendants, their cultures may have changed enough that the original meanings are lost. The use of objects to understand complex and culturally varied concepts like gender and sexuality is especially challenging. While a global survey of archaeological research relevant to LGBTQ studies is not possible in a work of this length, I will identify some LGBTQ+ themes in the archaeology of Mesoamerica and the Andes. I will show that many of these new interests and observations have been inspired by feminist and queer theory. While some aspects of queer theory have become almost mainstream in archaeology, the topics of sex, gender, and sexuality remain challenging ones for archaeologists.