Sexuality has long been an interest of sociocultural anthropological research. Anthropologists have historically explored ways in which specific cultures manifest their values through sexuality practices, resulting in analyses of categories such as kinship systems, hierarchy, and social roles. In other words, anthropologists are interested not only in the concept of sexuality and its many possible categories, but also the way in which it actually functions in various cultures, and the differences across cultures of these functions. Heterosexuality, the presumed norm of much of sexuality studies until the mid-20th century, is studied by anthropologists largely due to its  naturalization as a widespread practice in the West. Heterosexuality is a cross-cultural phenomenon and, due to its association with the reproduction of human life, it has also been connected to the sustainment of human culture. However, variations from heterosexuality are also cross-cultural phenomena, and anthropology has provided important contributions to this aspect of sexuality.

This chapter explores the anthropological challenge to the heterosexual norm through various non-heteronormative sexualities and gender embodiments that enact other lifeways for human beings, and in turn manifest difference in fascinating ways. Work on non-Western and Indigenous sexualities questions the very status of heteronormativity as a global mode of social organization. This is not to say that heterosexual kinship and the reproductive unit are not prominent features of nearly all cultures. Rather, a study of global sexualities shows the pertinence of questioning the imperative to be heterosexual, as well as the connection of this imperative to the machinations of capital, industry, colonialism/settler colonialism (Rifkin, 2011), and statecraft. Rather than dismissing non-heteronormative sexuality as an outlier or anomaly within cultures, the chapter focuses on how LGBTQ+ anthropology specifically posits the integral social function of these “other” sexualities across the globe. Specifically, it illuminates how pursuing culturally and historically specific data on different cultures provides anthropologists with a rich and textured portrait of sexual difference, that must always include gender variations and same sex relations.  Moreover, our understanding of sexual difference are often enriched by putting sexuality practices in conversation with concepts of gender, race, and class.

Broadly, anthropology is the study of human societies and cultures. It is comprised of four subfields which focus on varying aspects of human life: 1. Biological or Physical Anthropology studies the biological development of humans, our extinct hominin ancestors, and primates, 2. Archaeology studies material cultures, focusing on past societies through the physical evidence they have left behind, 3. Linguistic Anthropology studies languages and their effects on the social life of humans, and 4. Sociocultural Anthropology explores cultural variation, norms, and values. This latter subfield is the focus of this chapter, with an emphasis on sociocultural ethnographic studies of gender and sexuality. Ethnography is the primary qualitative research method used by anthropologists. It is the systematic study of human cultures which employs immersive, experiential techniques to glean valuable knowledge about human behavior. For instance, sociocultural  anthropologists will traditionally live in the communities they study, amongst the people who reside there. This is an attempt to understand life from the point of view of those being studied. 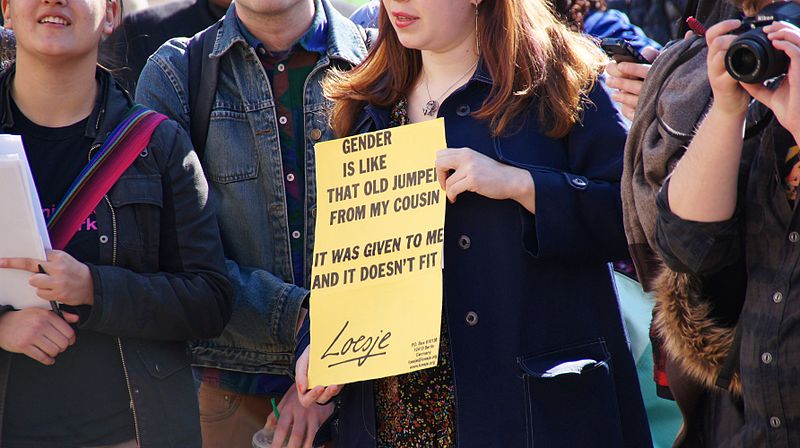 The anthropology of global sexualities has explored the manner in which gender and sexuality intertwine in varying ways across cultures; further, these variations trouble the distinctions between sexuality and gender as well as the concept of gender as a binary system. Studies of global sexualities and gender diversity conceptualize a number of different ways that sex, sexuality, and gender function in relation to one another. This relationship can take the form of discrete yet related categories, as closely interwoven qualities, and even as qualities that directly inform one another and are occasionally interchangeable or confluent. Gender is defined here as the experience of characteristics of femininity and masculinity that emerge as social norms and manifest in both sociocultural practices and identities. While some theorists prioritize the maintenance of boundaries between gender identity and sexuality, this has not always been the case in all cultures and throughout all historical periods. Further, identifying sexuality and gender as identity formations is not a universal practice. Some cultural conceptions of sexuality and gender see them as phenomena more precisely defined as a collection of practices or functions.

Additionally, the commonly held belief and investment in a gender binary is not a universal belief. Many cultures have third and fourth gender categories, and others understand certain individuals as neither male nor female, either as a result of embodying both genders, moving between gender embodiments (gender fluidity), or embodying neither (gender neutrality). While most research on non-heteronormative gender and sexuality practices focuses on assigned-male-at-birth third gender individuals and communities, important work on assigned-female-at-birth third gender individuals and queer sexualities (female two-spirit, genderfluid queerness and lesbianism, fa’atane) exists and is becoming more prevalent. As discussed below, important work in Native studies traces this connection to colonization and the effort of the colonizer to eradicate Native sexualities (Finley, 2011). This was done in order to justify the elimination and disappearance of native people, as well as justifying the systemic process of oppression inherent in colonialism by casting the Native body as sexually deviant.

One of the pioneering works that explores the integral social function of non-heteronormative sexualities and gender practices was Edward Carpenter’s Intermediate Types Among Primitive Folk, published in 1914. Carpenter was an outspoken socialist, philosopher, and early activist in the struggle for rights for homosexuals. This work is a combination of archival historical research and armchair ethnography that compiled field notes, travel writings, and anecdotal accounts of settlers, explorers, and missionaries in their encounters with non-heteronormative sexuality and gender practices across the globe. Carpenter’s theory of intermediacy repositions the non-heteronormative subject, (previously referred to as an invert or “Uranian”) as filling an ambiguously gendered middle ground that allowed them to occupy special positions in various societies at the level of ritual practitioners as well as creators of arts and crafts. In the case of ancient military histories of same-sex pair bonds and sex acts between soldiers/warriors, Carpenter looks at the samurai code of Japan, as well as military practices in Ancient Greece. These were often societally enforced sexual/romantic bonds between men at the level of mentorship and initiation, although the reasoning behind such activities and the way societies treated them is still a matter of debate and speculation. For Carpenter, “the intermediate” is an umbrella term for any person who falls outside of the normative definitions of sexuality or gender practices.

Evelyn Blackwood’s The Many Faces of Homosexuality

During the mid 20th century, a rise in LGBTQ+ visibility and political organization in Europe and the U.S. gave rise to a deeper engagement with Western LGBTQ+ culture by anthropologists. Often cited as the first U.S. ethnography on non-heteronormative sexuality and gender, Esther Newton’s 1972 work Mother Camp: Female Impersonators in America focused on the practice of drag performance/drag queens (called “female impersonators” at the time) in the mid 20th century United States. Newton’s work encouraged other LGBTQ+ anthropologists to pursue ethnographic research of LGBTQ+ sexualities across the globe. Evelyn Blackwood’s pioneering edited volume The Many Faces of Homosexuality: Anthropological Approaches to Homosexual Behavior (1986) presented a global ethnographic approach to various manifestations of homosexuality. Increasing influence from feminist and gender theory, as well as the rise of queer theory, rendered some anthropological concepts more complex. They continue to challenge the field today to address ethnographic research from the contexts of LGBTQ+-positive, anti-racist, feminist, and anti-colonialist/decolonizing perspectives. For example, one of anthropology’s main theories in studies on global sexualities is the adverse (violent, homogenizing, erasing) effects European colonialism has had—and continues to have—on the varied textures and conceptions of indigenous sexualities and gender embodiments worldwide. These violent colonial encounters were rooted in racist, heteronormative, religious orthodoxies which sought to erase indigenous lifeways (Morgensen, 2012.)

Will Roscoe’s work on two-spirit Zuni peoples (1992) and the development of the Two-Spirit activism in North America (Jacobs, Thomas, and Lang 1997) helped to reframe the idea of the erotic from an indigenous perspective—accounting for sexuality on its own terms rather than in constant comparison to a norm from which sexual and gender practices deviate. Some queer indigenous scholars developed the acronym Indigenous GLBTQ2, that is—Indigenous Gay, Lesbian, Bisexual, Transgender, Queer, Two-Spirit (Driskill, Finley, Gilley, & Morgensen, 2011) to describe the spectrum of sexualities and gender embodiments included under specifically Indigenous conceptualizations of sex and gender. Embracing the terms “queer” and “Two-Spirit,” these scholars argue for the decolonization of Indigenous sexualities, and indeed critique heteronormativity as a product of colonialism. In so doing, these scholars insist on the autonomy of Indigenous people in controlling and contributing to knowledge production about themselves.

Anthropologists contribute to knowledge production about global sexualities through their conception of both non-heteronormative sexuality and sexual practices, focusing on both “Western” LGBTQ+ sexualities and community in the context of globalization, as well as the ways in which sexuality and gender non-normativity were already present in pre-colonial global spaces. Queer theory’s resistance to “normal” categories of sexuality helps to re-frame the globalization of gay identity as a Western concept, which both coincides with and clashes with various global ideas about LGBTQ+ identity. The encounter of non-Western spaces with Western models of LGBTQ+ identity have had far-flung effects at the level of identity politics, rights-based notions of identity and community, as well as the adverse effects of governments using the presence of LGBTQ+ people to downplay unethical or illegal oppressive and violent behavior, a phenomenon known as pinkwashing.

Abelove (1989) and D’Emilio (1983) have suggested that so-called modern sexual identities such as heteronormativity and  LGBTQ+ identity (specifically addressing gay male and lesbian identity and community formation) coincide with the rise of industry and capitalism of the late 19th-early 20th centuries in the West. By way of example, D’Emilio connects the rise of lesbian and gay identities to the reduced centrality of the heteronormative family unit as a productive labor force necessary for self-sufficiency and survival. So, a thread in historical studies and cultural critique traces the now relatively common presence of LGBTQ+ communities globally through capitalism and industry, largely in urban centers. Anthropological contributions to this theory describe and document localized and regionally/culturally specific variations, noting that queerness as such (the presence of individuals engaging in non-heteronormative sexual practices and gender embodiments) precedes these modern historical developments, often tracing back to ancient periods.

Anthropological work emphasizes how indigenous concepts and terminology more accurately describe the nuanced differences of indigenous gender and sexuality from western LGBTQ+ neocolonial models. For instance, the Maori word for a same sex partner is takatapui; this word has also come to be used an identifier for LGBTQ+ identity in Maori culture. However, the term exceeds the mainstream Western definition of LGBTQ+ identity to describe non-heterosexual subjectivity generally as well as men who have sex with men (MSM) but do not identify as LGBTQ+ (Aspin 2011).  In Hawaiian culture, aikane describes a similar phenomenon and culturally-specific sexuality term. These terms were common in pre-colonial usage and, in the case of takatapui, have become re-popularized in contemporary society and used as markers to create distinctions between indigenous Maori modes of queerness and mainstream settler colonialist LGBTQ+ models of identity.