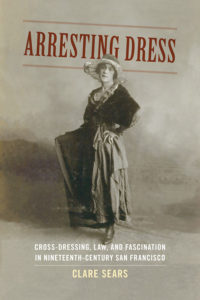 The cover of Arresting Dress by Clare Sear

Historians often face the difficult task of determining how and when to tell the story of certain events, ideas and or people. This is no less true in telling the history of LGBTQ law in the United States. It may be surprising to many but LGBTQ laws have a long, storied past that have existed as long as the United States itself. Laws enacted at local and state levels have been used to regulate acceptable sex and gender norms. For example, in Arresting Dress, Clare Sears (2014) writes about the 19th century San Francisco laws that outlawed cross-dressing. These laws and resistance to them tell important pieces of how LGBTQ practices were regulated. This chapter will focus on some of the key legal doctrines that have been crucial in determining the overall landscape of LGBTQ rights in the United States. In so doing, attention will be given to the Supreme Court’s interpretation of the U.S. Constitution and its application to protecting members of LGBTQ communities.

Throughout this chapter it is important to remember that our system of constitutional law is premised on the idea that the rights enumerated in the federal constitution are natural rights; rights that are inalienable and pre-exist our government. What this means is that the Bill of Rights, the first 10 amendments to the Constitution, does not “give” any rights. Rather, each right is a mandate for the government to not interfere with individual rights and/or to prevent others from doing so. For example, the First Amendment right to free speech does not mean that the government has to give you the means to “speak” but, as a rule, it cannot interfere with one’s inalienable right to do so (Mackinnon, 1996). Crucial to making any claim to protected rights is that one must be recognized as human. As anyone who is familiar with U.S. history knows, African and African-American slaves were deemed to be chattel (property) and not human which served to deny them protections as enumerated by these rights. In addition, women, particularly married women, were not recognized as independent citizens and also lacked many of the Constitution’s enumerated rights. Though this egregious thinking would begin to be overturned in the later half of the 19th century, it is important to keep this in mind as one surveys the rights that eventually applied to members of the LGBTQ communities.

Ironically, sexuality, so basic to the human experience, was never mentioned in the original federal constitution or by James Madison, the principal architect of the Bill of Rights. This chapter will provide an understanding of the constitutional based issues that have influenced recent outcomes of the protected rights of LGBTQ communities. We will begin this discussion with a closer look at the tenets that paved the way for recognition of sexual rights. Next we will examine the process that eventually led the Supreme Court to extend these rights to include lesbian and gay sexualities. As we will see the next large hurdle confronting the Court was the question of marriage equality. Finally we will give brief consideration to recent issues before the Court that go beyond sexual rights but strike at core understandings of LGBTQ equality.