Which of the following best describes you in your romantic relationships?

Hazan and Shaver (1987) described the attachment styles of adults, using the same three general categories proposed by Ainsworth’s research on young children; secure, avoidant, and anxious/ambivalent. Hazan and Shaver developed three brief paragraphs describing the three adult attachment styles. Adults were then asked to think about romantic relationships they were in and select the paragraph that best described the way they felt, thought, and behaved in these relationships (See Table 7.4).

Bartholomew (1990) challenged the categorical view of attachment in adults and suggested that adult attachment was best described as varying along two dimensions; attachment related-anxiety and attachment-related avoidance. Attachment-related anxiety refers to the extent to which an adult worries about whether their partner really loves them. Those who score high on this dimension fear that their partner will reject or abandon them (Fraley, Hudson, Heffernan, & Segal, 2015). Attachment-related avoidance refers to whether an adult can open up to others, and whether they trust and feel they can depend on others. Those who score high on attachment- related avoidance are uncomfortable with opening up and may fear that such dependency may limit their sense of autonomy (Fraley et al., 2015). According to Bartholomew (1990) this would yield four possible attachment styles in adults; secure, dismissing, preoccupied, and fearful- avoidant (see Figure 7.19) 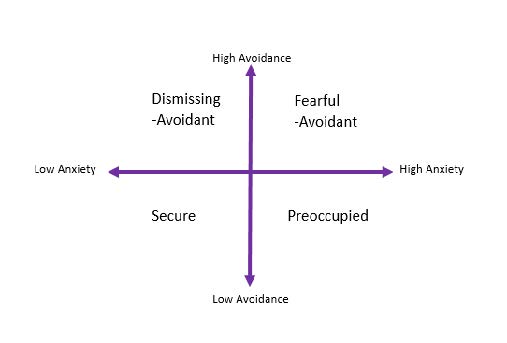 Securely attached adults score lower on both dimensions. They are comfortable trusting their partners and do not worry excessively about their partner’s love for them. Adults with a dismissing style score low on attachment-related anxiety, but higher on attachment-related avoidance. Such adults dismiss the importance of relationships. They trust themselves, but do not trust others, thus do not share their dreams, goals, and fears with others. They do not depend on other people, and feel uncomfortable when they have to do so.

Research on attachment in adulthood has found that:

Do people with certain attachment styles attract those with similar styles? When people are asked what kinds of psychological or behavioral qualities they are seeking in a romantic partner, a large majority of people indicate that they are seeking someone who is kind, caring, trustworthy, and understanding, that is the kinds of attributes that characterize a “secure” caregiver (Chappell & Davis, 1998). However, we know that people do not always end up with others who meet their ideals. Are secure people more likely to end up with secure partners, and, vice versa, are insecure people more likely to end up with insecure partners? The majority of the research that has been conducted to date suggests that the answer is “yes.” Frazier, Byer, Fischer, Wright, and DeBord (1996) studied the attachment patterns of more than 83 heterosexual couples and found that, if the man was relatively secure, the woman was also likely to be secure.

One important question is whether these findings exist because (a) secure people are more likely to be attracted to other secure people, (b) secure people are likely to create security in their partners over time, or (c) some combination of these possibilities. Existing empirical research strongly supports the first alternative. For example, when people have the opportunity to interact with individuals who vary in security in a speed-dating context, they express a greater interest in those who are higher in security than those who are more insecure (McClure, Lydon, Baccus, & Baldwin, 2010). However, there is also some evidence that people’s attachment styles mutually shape one another in close relationships. For example, in a longitudinal study, Hudson, Fraley, Vicary, and Brumbaugh (2012) found that, if one person in a relationship experienced a change in security, his or her partner was likely to experience a change in the same direction.

Do early experiences as children shape adult attachment? The majority of research on this issue is retrospective; that is, it relies on adults’ reports of what they recall about their childhood experiences. This kind of work suggests that secure adults are more likely to describe their early childhood experiences with their parents as being supportive, loving, and kind (Hazan & Shaver, 1987). A number of longitudinal studies are emerging that demonstrate prospective associations between early attachment experiences and adult attachment styles and/or interpersonal functioning in adulthood. For example, Fraley, Roisman, Booth-LaForce, Owen, and Holland (2013) found in a sample of more than 700 individuals studied from infancy to adulthood that maternal sensitivity across development prospectively predicted security at age 18. Simpson, Collins, Tran, and Haydon (2007) found that attachment security, assessed in infancy in the strange situation, predicted peer competence in grades one to three, which, in turn, predicted the quality of friendship relationships at age 16, which, in turn, predicted the expression of positive and negative emotions in their adult romantic relationships at ages 20 to 23.

It is easy to come away from such findings with the mistaken assumption that early experiences “determine” later outcomes. To be clear: Attachment theorists assume that the relationship between early experiences and subsequent outcomes is probabilistic, not deterministic. Having supportive and responsive experiences with caregivers early in life is assumed to set the stage for positive social development. But that does not mean that attachment patterns are set in stone. In short, even if an individual has far from optimal experiences in early life, attachment theory suggests that it is possible for that individual to develop well-functioning adult relationships through a number of corrective experiences, including relationships with siblings, other family members, teachers, and close friends. Security is best viewed as a culmination of a person’s attachment history rather than a reflection of his or her early experiences alone. Those early experiences are considered important, not because they determine a person’s fate, but because they provide the foundation for subsequent experiences.