Children’s Understanding of the World

Both Piaget and Vygotsky believed that children actively try to understand the world around them. More recently developmentalists have added to this understanding by examining how children organize information and develop their own theories about the world.

Theory-Theory is the tendency of children to generate theories to explain everything they encounter. This concept implies that humans are naturally inclined to find reasons and generate explanations for why things occur. Children frequently ask question about what they see or hear around them.

When the answers provided do not satisfy their curiosity or are too complicated for them to understand, they generate their own theories. In much the same way that scientists construct and revise their theories, children do the same with their intuitions about the world as they encounter new experiences (Gopnik & Wellman, 2012). One of the theories they start to generate in early childhood centers on the mental states; both their own and those of others.

Theory of mind refers to the ability to think about other people’s thoughts. This mental mind reading helps humans to understand and predict the reactions of others, thus playing a crucial role in social development. One common method for determining if a child has reached this mental milestone is the false belief task, described below. 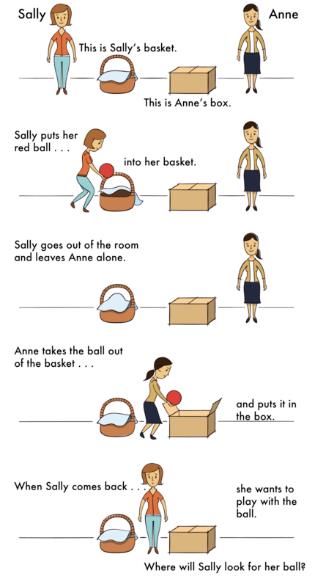 The research began with a clever experiment by Wimmer and Perner (1983), who tested whether children can pass a false-belief test (see Figure 4.17). The child is shown a picture story of Sally, who puts her ball in a basket and leaves the room. While Sally is out of the room, Anne comes along and takes the ball from the basket and puts it inside a box. The child is then asked where Sally thinks the ball is located when she comes back to the room. Is she going to look first in the box or in the basket? The right answer is that she will look in the basket, because that’s where she put it and thinks it is; but we have to infer this false belief against our own better knowledge that the ball is in the box. This is very difficult for children before the age of four because of the cognitive effort it takes. Three-year-olds have difficulty distinguishing between what they once thought was true and what they now know to be true. They feel confident that what they know now is what they have always known (Birch & Bloom, 2003).

Even adults need to think through this task (Epley, Morewedge, & Keysar, 2004). To be successful at solving this type of task the child must separate what he or she “knows” to be true from what someone else might “think” is true. In Piagetian terms, they must give up a tendency toward egocentrism. The child must also understand that what guides people’s actions and responses are what they “believe” rather than what is reality. In other words, people can mistakenly believe things that are false and will act based on this false knowledge. Consequently, prior to age four children are rarely successful at solving such a task (Wellman, Cross & Watson, 2001).

Researchers examining the development of theory of mind have been concerned by the overemphasis on the mastery of false belief as the primary measure of whether a child has attained theory of mind. Wellman and his colleagues (Wellman, Fang, Liu, Zhu & Liu, 2006) suggest that theory of mind is comprised of a number of components, each with its own developmental timeline (see Table 4.2).

Table 4.2 Components of Theory of Mind

Those in early childhood in the US, Australia, and Germany develop theory of mind in the sequence outlined above. Yet, Chinese and Iranian preschoolers acquire knowledge access before diverse beliefs (Shahaeian, Peterson, Slaughter & Wellman, 2011). Shahaeian and colleagues suggested that cultural differences in child-rearing may account for this reversal. Parents in collectivistic cultures, such as China and Iran, emphasize conformity to the family and cultural values, greater respect for elders, and the acquisition of knowledge and academic skills more than they do autonomy and social skills (Frank, Plunkett & Otten, 2010). This could reduce the degree of familial conflict of opinions expressed in the family. In contrast, individualistic cultures encourage children to think for themselves and assert their own opinion, and this could increase the risk of conflict in beliefs being expressed by family members. As a result, children in individualistic cultures would acquire insight into the question of diversity of belief earlier, while children in collectivistic cultures would acquire knowledge access earlier in the sequence. The role of conflict in aiding the development of theory of mind may account for the earlier age of onset of an understanding of false belief in children with siblings, especially older siblings (McAlister & Petersen, 2007; Perner, Ruffman & Leekman, 1994).

This awareness of the existence of theory of mind is part of social intelligence, such as recognizing that others can think differently about situations. It helps us to be self-conscious or aware that others can think of us in different ways and it helps us to be able to be understanding or be empathic toward others. Moreover, this mind reading ability helps us to anticipate and predict people’s actions. The awareness of the mental states of others is important for communication and social skills.