Female Sexual and Reproductive Health: Perimenopause refers to a period of transition in which a woman’s ovaries stop releasing eggs and the level of estrogen and progesterone production decreases. Menopause is defined as 12 months without menstruation. The average age of menopause is approximately 51, however, many women begin experiencing symptoms in their 40s. These symptoms occur during perimenopause, which can occur 2 to 8 years before menopause (Huang, 2007). A woman may first begin to notice that her periods are more or less frequent than before. After a year without menstruation, a woman is considered menopausal and no longer capable of reproduction.

Symptoms: The symptoms that occur during perimenopause and menopause are typically caused by the decreased production of estrogen and progesterone (North American Menopause Society, 2016). The shifting hormones can contribute to the inability to fall asleep. Additionally, the declining levels of estrogen may make a woman more susceptible to environmental factors and stressors which disrupt sleep. A hot flash is a surge of adrenaline that can awaken the brain from sleep. It often produces sweat and a change of temperature that can be disruptive to sleep and comfort levels. Unfortunately, it may take time for adrenaline to recede and allow sleep to occur again (National Sleep Foundation, 2016).

The loss of estrogen also affects vaginal lubrication which diminishes and becomes waterier and can contribute to pain during intercourse. The vaginal wall also becomes thinner, and less elastic. Estrogen is also important for bone formation and growth, and decreased estrogen can cause osteoporosis resulting in decreased bone mass. Depression, irritability, and weight gain are often associated with menopause, but they are not menopausal (Avis, Stellato & Crawford, 2001; Rossi, 2004). Weight gain can occur due to an increase in intra-abdominal fat followed by a loss of lean body mass after menopause (Morita et al., 2006). Consequently, women may need to change their lifestyle to counter any weight gain. Depression and mood swings are more common during menopause in women who have prior histories of these conditions rather than those who have not. Additionally, the incidence of depression and mood swings is not greater among menopausal women than non-menopausal women. Figure 8.12 identifies symptoms experienced by women during menopause, however, women vary greatly in the extent to which these symptoms are experienced. Most American women go through menopause with few problems (Carroll, 2016). Overall, menopause is not seen as universally distressing (Lachman, 2004). 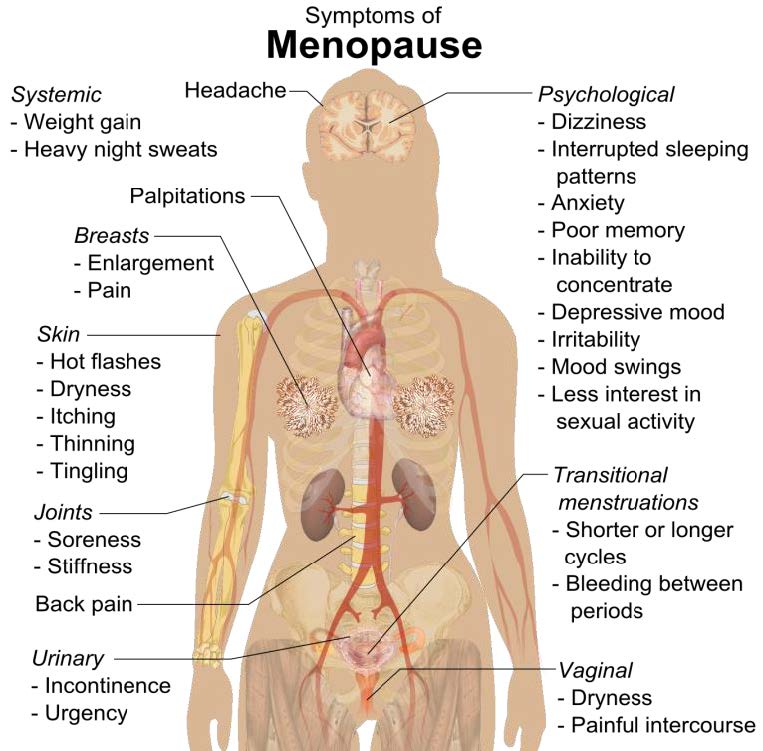 Cultural Differences: Cultural influences seem to also play a role in the way menopause is experienced. Further, the prevalence of language specific to menopause is an important indicator of the occurrence of menopausal symptoms in a culture. Hmong tribal women living in Australia and Mayan women report that there is no word for “hot flashes” and both groups did not experience these symptoms (Yick-Flanagan, 2013). When asked about physical changes during menopause, the Hmong women reported lighter or no periods. They also reported no emotional symptoms and found the concept of emotional difficulties caused by menopause amusing (Thurston & Vissandjee, 2005). Similarly, a study with First Nation women in Canada found there was no single word for “menopause” in the Oji-Cree or Ojibway languages, with women referring to menopause only as “that time when periods stop” (Madden, St Pierre-Hansen & Kelly, 2010).

While some women focus on menopause as a loss of youth, womanhood, and physical attractiveness, career-oriented women tend to think of menopause as a liberating experience. Japanese women perceive menopause as a transition from motherhood to a more whole person, and they no longer feel obligated to fulfill certain expected social roles, such as the duty to be a mother (Kagawa-Singer, Wu, & Kawanishi, 2002). In India, 94% of women said they welcomed menopause. Aging women gain status and prestige and no longer have to go through self- imposed menstrual restrictions, which may contribute to Indian women’s experiences (Kaur, Walia, & Singh, 2004). Overall, menopause signifies many different things to women around the world and there is no typical experience. Further, normalizing rather than pathologizing menopause is supported by research and women’s experiences.

Male Sexual and Reproductive Health: Although males can continue to father children throughout middle adulthood, erectile dysfunction (ED) becomes more common. Erectile dysfunction refers to the inability to achieve an erection or an inconsistent ability to achieve an erection (Swierzewski, 2015). Intermittent ED affects as many as 50% of men between the ages of 40 and 70. About 30 million men in the United States experience chronic ED, and the percentages increase with age. Approximately 4% of men in their 40s, 17% of men in their 60s, and 47% of men older than 75 experience chronic ED.

Causes for ED are primarily due to medical conditions, including diabetes, kidney disease, alcoholism, and atherosclerosis (build-up of plaque in the arteries). Plaque is made up of fat, cholesterol, calcium and other substances found in the blood. Over time plaque builds up, hardens, and restricts the blood flow in the arteries (NIH, 2014d). This build-up limits the flow of oxygenated blood to organs and the penis. Overall, diseases account for 70% of chronic ED, while psychological factors, such as stress, depression and anxiety account for 10%-20% of all cases. Many of these causes are treatable, and ED is not an inevitable result of aging.

Men during middle adulthood may also experience prostate enlargement, which can interfere with urination, and deficient testosterone levels which decline throughout adulthood, but especially after age 50. If testosterone levels decline significantly, it is referred to as andropause or late-onset hypogonadism. Identifying whether testosterone levels are low is difficult because individual blood levels vary greatly. Low testosterone is not a concern unless it accompanied by negative symptoms such as low sex drive, ED, fatigue, loss of muscle, loss of body hair, or breast enlargement. Low testosterone is also associated with medical conditions, such as diabetes, obesity, high blood pressure, and testicular cancer. The effectiveness of supplemental testosterone is mixed, and long term testosterone replacement therapy for men can increase the risk of prostate cancer, blood clots, heart attack and stroke (WebMD, 2016). Most men with low testosterone do not have related problems (Berkeley Wellness, 2011).