In contrast to descriptive research, which is designed primarily to provide static pictures, correlational research involves the measurement of two or more relevant variables and an assessment of the relationship between or among those variables. For instance, the variables of height and weight are systematically related (correlated) because taller people generally weigh more than shorter people. 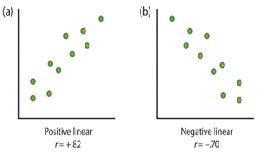 Figure 1.14 Some examples of relationships between two variables as shown in scatter plots.

An important limitation of correlational research designs is that they cannot be used to draw conclusions about the causal relationships among the measured variables. Consider, for instance, a researcher who has hypothesized that viewing violent behavior will cause increased aggressive play in children. He has collected, from a sample of fourth-grade children, a measure of how much violent television each child views during the week, as well as a measure of how aggressively each child plays. The researcher discovers a positive correlation between the two measured variables. Although this positive correlation appears to support the hypothesis, it cannot be taken to indicate that viewing violent television causes aggressive behavior as there are other possible explanations. One alternative is that children who behaved aggressively at school want to watch violent television shows. Still another possible explanation for the observed correlation is that it has been produced by the presence of a third variable.

A third variable is a variable that is not part of the research hypothesis but produces the observed correlation between them. In our example a potential third variable is the discipline style of the children’s parents.

Parents who use a harsh and punitive discipline style may produce children who both like to watch violent television and who behave aggressively in comparison to children whose parents use less harsh discipline.

Strengths and limitations: Correlational research can be used when experimental research is not possible because the variables cannot be manipulated or it would be unethical to use an experiment. Correlational designs also have the advantage of allowing the researcher to study behavior as it occurs in everyday life. We can also use correlational designs to make predictions. For instance, we can predict from the scores on a battery of tests the success of job trainees during a training session. However, we cannot use such correlational information to determine whether one variable caused another variable. For that, researchers rely on an experiment.