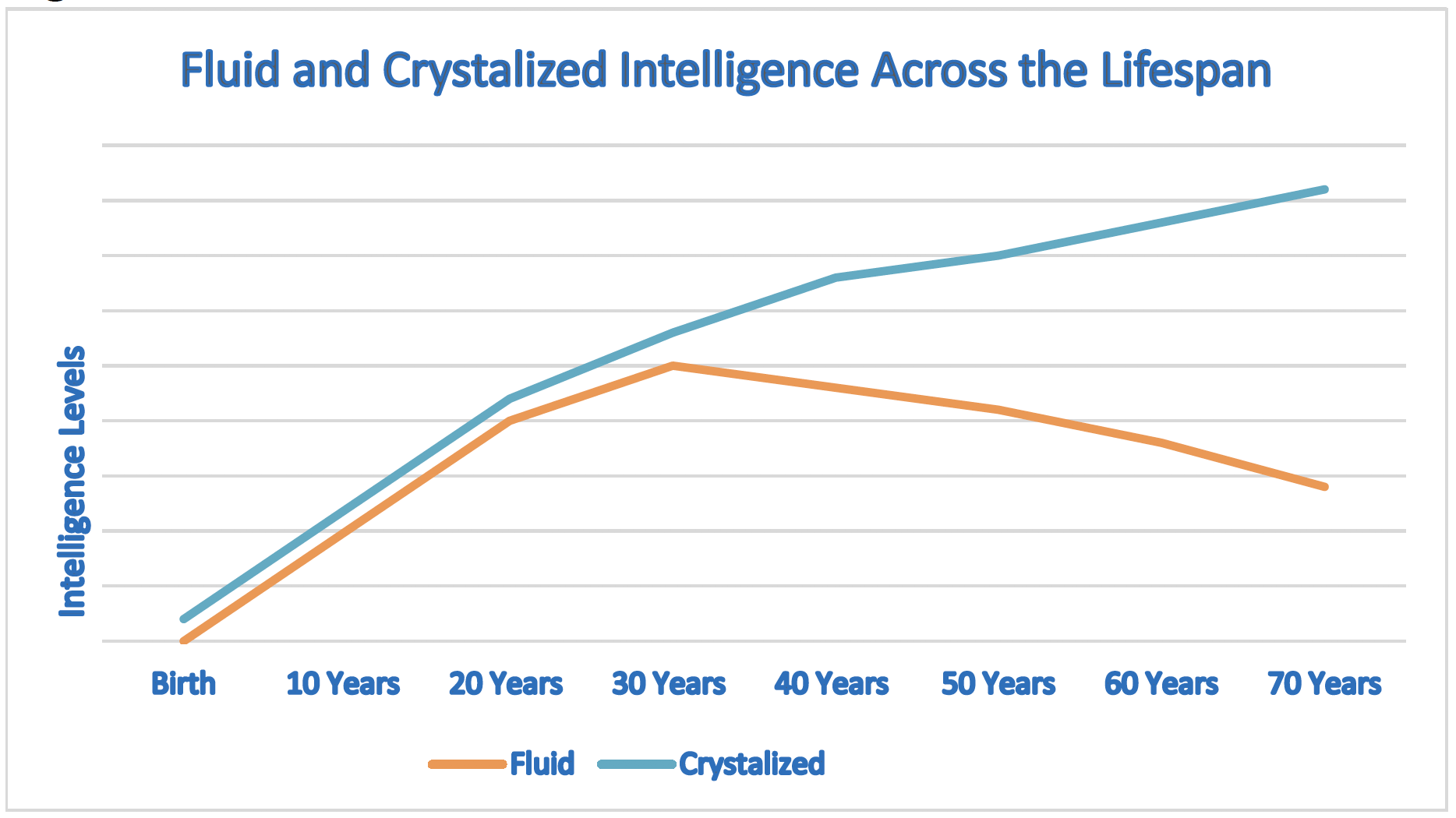 Adapted from Horn, Donaldson and Engstrom (1981)

Research demonstrates that older adults have more crystallized intelligence as reflected in semantic knowledge, vocabulary, and language. As a result, adults generally outperform younger people on measures of history, geography, and even on crossword puzzles, where this information is useful (Salthouse, 2004). It is this superior knowledge, combined with a slower and more complete processing style, along with a more sophisticated understanding of the workings of the world around them, that gives older adults the advantage of “wisdom” over the advantages of fluid intelligence which favor the young (Baltes, Staudinger, & Lindenberger, 1999; Scheibe, Kunzmann, & Baltes, 2009).

The differential changes in crystallized versus fluid intelligence help explain why older adults do not necessarily show poorer performance on tasks that also require experience (i.e., crystallized intelligence), although they show poorer memory overall. A young chess player may think more quickly, for instance, but a more experienced chess player has more knowledge to draw on.

Seattle Longitudinal Study: The Seattle Longitudinal Study has tracked the cognitive abilities of adults since 1956. Every seven years the current participants are evaluated and new individuals are also added. Approximately 6000 people have participated thus far, and 26 people from the original group are still in the study today. Current results demonstrate that middle-aged adults perform better on four out of six cognitive tasks than those same individuals did when they were young adults. Verbal memory, spatial skills, inductive reasoning (generalizing from particular examples), and vocabulary increase with age until one’s 70s (Schaie, 2005; Willis & Shaie, 1999). However, numerical computation and perceptual speed decline in middle and late adulthood (see Figure 8.17). 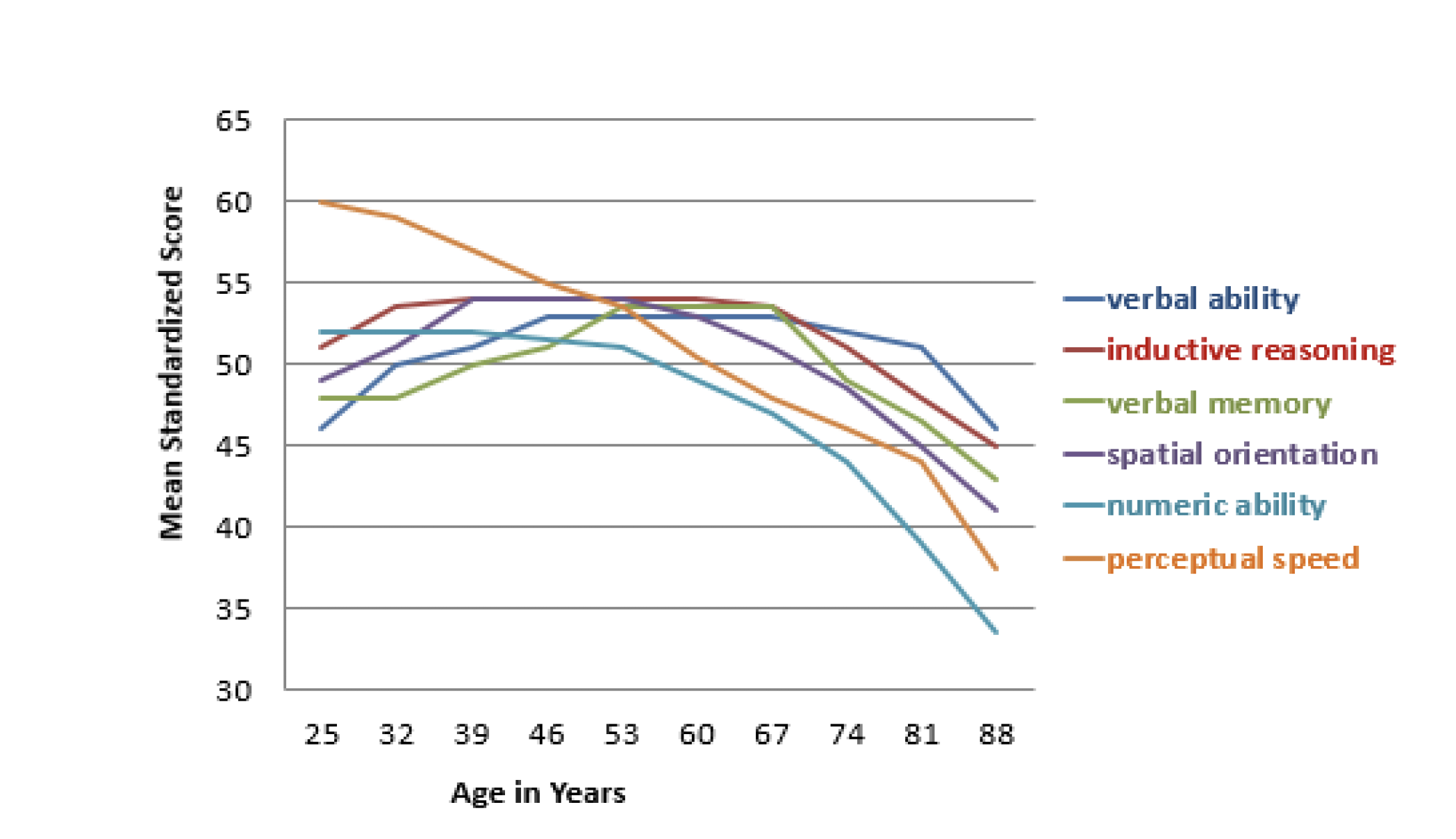 Cognitive skills in the aging brain have been studied extensively in pilots, and similar to the Seattle Longitudinal Study results, older pilots show declines in processing speed and memory capacity, but their overall performance seems to remain intact. According to Phillips (2011) researchers tested pilots age 40 to 69 as they performed on flight simulators. Older pilots took longer to learn to use the simulators, but performed better than younger pilots at avoiding collisions.

Flow is the mental state of being completely present and fully absorbed in a task (Csikszentmihalyi, 1990). When in a state of flow, the individual is able to block outside distractions and the mind is fully open to producing. Additionally, the person is achieving great joy or intellectual satisfaction from the activity and accomplishing a goal. Further, when in a state of flow, the individual is not concerned with extrinsic rewards. Csikszentmihalyi (1996) used his theory of flow to research how some people exhibit high levels of creativity as he believed that a state of flow is an important factor to creativity (Kaufman & Gregoire, 2016). Other characteristics of creative people identified by Csikszentmihalyi (1996) include curiosity and drive, a value for intellectual endeavors, and an ability to lose our sense of self and feel a part of something greater. In addition, he believed that the tortured creative person was a myth and that creative people were very happy with their lives. According to Nakamura and Csikszentmihalyi (2002) people describe flow as the height of enjoyment. The more they experience it, the more they judge their lives to be gratifying. The qualities that allow for flow are well-developed in middle adulthood.

Tacit knowledge is knowledge that is pragmatic or practical and learned through experience rather than explicitly taught, and it also increases with age (Hedlund, Antonakis, & Sternberg, 2002). Tacit knowledge might be thought of as “know-how” or “professional instinct.” It is referred to as tacit because it cannot be codified or written down. It does not involve academic knowledge, rather it involves being able to use skills and to problem-solve in practical ways. Tacit knowledge can be understood in the workplace and used by blue collar workers, such as carpenters, chefs, and hair dressers.