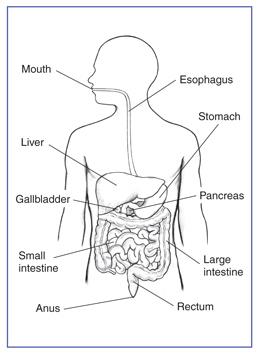 Heartburn, also called acid indigestion or pyrosis, is a common digestive problem in adults and is the result of stomach acid backing up into the esophagus. Prolonged contact with the digestive juices injures the lining of the esophagus and causes discomfort. Heartburn that occurs more frequently may be due to gastroesophageal reflux disease, GERD. Normally the lower sphincter muscle in the esophagus keeps the acid in the stomach from entering the esophagus. In GERD this muscle relaxes too frequently and the stomach acid flows into the esophagus. In the U.S. 60 million people experience heartburn at least once a month, and 15 million experience it every day. Prolonged problems with heartburn can lead to more serious complications, including esophageal cancer, one of the most lethal forms of cancer in the U.S. Problems with heartburn can be linked to eating fatty or spicy foods, caffeine, smoking, and eating before bedtime (American College of Gastroenterology, 2016a).

Gallstones are hard particles, including fatty materials, bile pigments, and calcium deposits, that can develop in the gallbladder. Ranging in size from a grain of sand to a golf ball, they typically take years to develop, but in some people have developed over the course of a few months. About 75% of gallstones do not create any symptoms, but those that do may cause sporadic upper abdominal pain when stones block bile or pancreatic ducts. If stones become lodged in the ducts, it may necessitate surgery or other medical intervention as it could become life-threatening if left untreated (American College of Gastroenterology, 2016b).

Gallstones are present in about 20% of women and 10% of men over the age of 55 (American College of Gastroenterology, 2016b). Risk factors include a family history of gallstones, diets high in calories and refined carbohydrates (such as, white bread and rice), diabetes, metabolic syndrome, Crohn’s disease, and obesity, which increases the cholesterol in the bile and thus increases the risk of developing gallstones (NIH, 2013).