Children differ in their memory abilities, and these differences predict both their readiness for school and academic performance in school (PreBler, Krajewski, & Hasselhorn, 2013). During middle and late childhood children make strides in several areas of cognitive function including the capacity of working memory, their ability to pay attention, and their use of memory strategies. Both changes in the brain and experience foster these abilities.

Working Memory: The capacity of working memory expands during middle and late childhood, and research has suggested that both an increase in processing speed and the ability to inhibit irrelevant information from entering memory are contributing to the greater efficiency of working memory during this age (de Ribaupierre, 2002). Changes in myelination and synaptic pruning in the cortex are likely behind the increase in processing speed and ability to filter out irrelevant stimuli (Kail, McBride-Chang, Ferrer, Cho, & Shu, 2013).

Attention: As noted above the ability to inhibit irrelevant information improves during this age group, with there being a sharp improvement in selective attention from age six into adolescence (Vakil, Blachstein, Sheinman, & Greenstein, 2009). Children also improve in their ability to shift their attention between tasks or different features of a task (Carlson, Zelazo, & Faja, 2013). A younger child who is asked to sort objects into piles based on type of object, car versus animal, or color of object, red versus blue, may have difficulty if you switch from asking them to sort based on type to now having them sort based on color. This requires them to suppress the prior sorting rule. An older child has less difficulty making the switch, meaning there is greater flexibility in their attentional skills. These changes in attention and working memory contribute to children having more strategic approaches to challenging tasks.

Memory Strategies: Bjorklund (2005) describes a developmental progression in the acquisition and use of memory strategies. Such strategies are often lacking in younger children, but increase in frequency as children progress through elementary school. Examples of memory strategies include rehearsing information you wish to recall, visualizing and organizing information, creating rhymes, such “i” before “e” except after “c”, or inventing acronyms, such as “roygbiv” to remember the colors of the rainbow. Schneider, Kron-Sperl, and Hünnerkopf (2009) reported a steady increase in the use of memory strategies from ages six to ten in their longitudinal study (see Table 5.2). Moreover, by age ten many children were using two or more memory strategies to help them recall information. Schneider and colleagues found that there were considerable individual differences at each age in the use of strategies, and that children who utilized more strategies had better memory performance than their same aged peers. 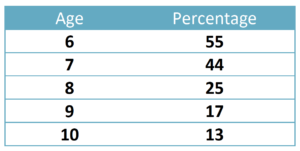 Table 5.2 Percent of Children who did not use any Memory Strategies by Age.

Children may experience three deficiencies in their use of memory strategies. A mediation deficiency occurs when a child does not grasp the strategy being taught, and thus, does not benefit from its use. If you do not understand why using an acronym might be helpful, or how to create an acronym, the strategy is not likely to help you. In a production deficiency the child does not spontaneously use a memory strategy, and has to be prompted to do so. In this case, the child knows the strategy and is more than capable of using it, but they fail to “produce” the strategy on their own. For example, a child might know how to make a list, but may fail to do this to help them remember what to bring on a family vacation. A utilization deficiency refers to a child using an appropriate strategy, but it fails to aid their performance. Utilization deficiency is common in the early stages of learning a new memory strategy (Schneider & Pressley, 1997; Miller, 2000). Until the use of the strategy becomes automatic it may slow down the learning process, as space is taken up in memory by the strategy itself. Initially, children may get frustrated because their memory performance may seem worse when they try to use the new strategy. Once children become more adept at using the strategy, their memory performance will improve. Sodian and Schneider (1999) found that new memory strategies acquired prior to age eight often show utilization deficiencies with there being a gradual improvement in the child’s use of the strategy. In contrast, strategies acquired after this age often followed an “all-or-nothing” principle in which improvement was not gradual, but abrupt.

Knowledge Base: During middle and late childhood, children are able to learn and remember due to an improvement in the ways they attend to and store information. As children enter school and learn more about the world, they develop more categories for concepts and learn more efficient strategies for storing and retrieving information. One significant reason is that they continue to have more experiences on which to tie new information. In other words, their knowledge base, knowledge in particular areas that makes learning new information easier, expands (Berger, 2014).

Metacognition: Children in middle and late childhood also have a better understanding of how well they are performing a task, and the level of difficulty of a task. As they become more realistic about their abilities, they can adapt studying strategies to meet those needs. Young children spend as much time on an unimportant aspect of a problem as they do on the main point, while older children start to learn to prioritize and gauge what is significant and what is not. As a result, they develop metacognition. Metacognition refers to the knowledge we have about our own thinking and our ability to use this awareness to regulate our own cognitive processes (Bruning, Schraw, Norby, & Ronning, 2004).

Critical Thinking: According to Bruning et al. (2004) there is a debate in U.S. education as to whether schools should teach students what to think or how to think. Critical thinking, or a detailed examination of beliefs, courses of action, and evidence, involves teaching children how to think. The purpose of critical thinking is to evaluate information in ways that help us make informed decisions. Critical thinking involves better understanding a problem through gathering, evaluating, and selecting information, and also by considering many possible solutions. Ennis (1987) identified several skills useful in critical thinking. These include: Analyzing arguments, clarifying information, judging the credibility of a source, making value judgements, and deciding on an action. Metacognition is essential to critical thinking because it allows us to reflect on the information as we make decisions.