Cognitive control: As noted in earlier chapters, executive functions, such as attention, increases in working memory, and cognitive flexibility have been steadily improving since early childhood. Studies have found that executive function is very competent in adolescence. However, self-regulation, or the ability to control impulses, may still fail. A failure in self- regulation is especially true when there is high stress or high demand on mental functions (Luciano & Collins, 2012). While high stress or demand may tax even an adult’s self-regulatory abilities, neurological changes in the adolescent brain may make teens particularly prone to more risky decision making under these conditions. 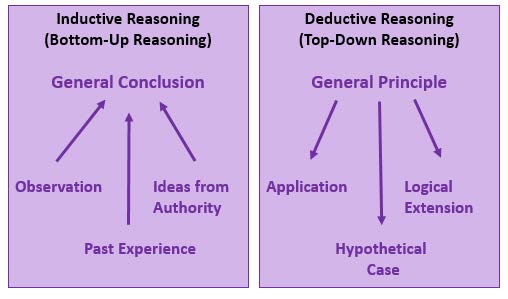 Inductive and Deductive Reasoning: Inductive reasoning emerges in childhood, and is a type of reasoning that is sometimes characterized as “bottom-up- processing” in which specific observations, or specific comments from those in authority, may be used to draw general conclusions. However, in inductive reasoning the veracity of the information that created the general conclusion does not guarantee the accuracy of that conclusion. For instance, a child who has only observed thunder on summer days may conclude that it only thunders in the summer. In contrast, deductive reasoning, sometimes called “top-down-processing”, emerges in adolescence. This type of reasoning starts with some overarching principle, and based on this propose specific conclusions. Deductive reasoning guarantees a truthful conclusion if the premises on which it is based are accurate.

Intuitive versus Analytic Thinking: Cognitive psychologists often refer to intuitive and analytic thought as the Dual-Process Model; the notion that humans have two distinct networks for processing information (Albert & Steinberg, 2011). Intuitive thought is automatic, unconscious, and fast (Kahneman, 2011), and it is more experiential and emotional. In contrast, Analytic thought is deliberate, conscious, and rational. While these systems interact, they are distinct (Kuhn, 2013). Intuitive thought is easier and more commonly used in everyday life. It is also more commonly used by children and teens than by adults (Klaczynski, 2001). The quickness of adolescent thought, along with the maturation of the limbic system, may make teens more prone to emotional intuitive thinking than adults.