Early childhood is the time period when most children acquire the basic skills for locomotion, such as running, jumping, and skipping, and object control skills, such as throwing, catching, and kicking (Clark, 1994). Children continue to improve their gross motor skills as they run and jump. Fine motor skills are also being refined in activities, such as pouring water into a container, drawing, coloring, and buttoning coats and using scissors. Table 4.1 highlights some of the changes in motor skills during early childhood between 2 and 5 years of age. The development of greater coordination of muscles groups and finer precision can be seen during this time period. Thus, average 2-year-olds may be able to run with slightly better coordination than they managed as a toddler, yet they would have difficulty peddling a tricycle, something the typical 3-year-old can do. We see similar changes in fine motor skills with 4-year-olds who no longer struggle to put on their clothes, something they may have had problems with two years earlier. Motor skills continue to develop into middle childhood, but for those in early childhood, play that deliberately involves these skills is emphasized.

Children’s Art: Children’s art highlights many developmental changes. Rhoda Kellogg (1969) noted that children’s drawings underwent several transformations. Starting with about 20 different types of scribbles at age 2, children move on to experimenting with the placement of scribbles on the page. By age 3 they are using the basic structure of scribbles to create shapes and are beginning to combine these shapes to create more complex images. By 4 or 5 children are creating images that are more recognizable representations of the world. These changes are a function of improvement in motor skills, perceptual development, and cognitive understanding of the world (Cote & Golbeck, 2007). 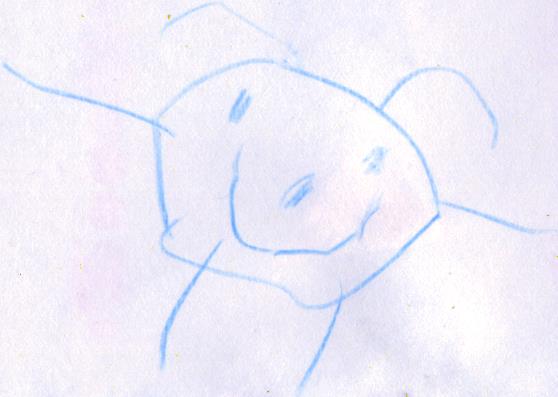 Despite the universality of tadpoles in children’s drawings, there are cultural variations in the size, number of facial features, and emotional expressions displayed. Gernhardt et al. (2015) found that children from Western contexts (i.e., urban areas of Germany and Sweden) and urban educated non-Western contexts (i.e., urban areas of Turkey, Costa Rica and Estonia) drew larger images, with more facial detail and more positive emotional expressions, while those from non-Western rural contexts (i.e., rural areas of Cameroon and India) depicted themselves as smaller, with less facial details and a more neutral emotional expression. The authors suggest that cultural norms of non-Western traditionally rural cultures, which emphasize the social group rather than the individual, may be one of the factors for the difference in the size of the figure. The tadpole figures of children from Western cultures often took up most of the page. Coming from cultures that emphasize the individual, this should not be surprising.