Although at the peak of physical health, a concern for early adults is the current rate of obesity. Results from the 2015 National Center for Health Statistics indicate that an estimated 70.7% of U.S. adults aged 20 and over are overweight and 37.9% are obese (CDC, 2015b). Body mass index (BMI), expressed as weight in kilograms divided by height in meters squared (kg/m2), is commonly used to classify overweight (BMI 25.0–29.9), obesity (BMI greater than or equal to 30.0), and extreme obesity (BMI greater than or equal to 40.0). The 2015 statistics are an increase from the 2013-2014 statistics that indicated that an estimated 35.1% were obese, and 6.4% extremely obese (Fryar, Carroll, & Ogden, 2014). In 2003-2004, 32% of American adults were identified as obese. The CDC also indicated that one’s 20s are the prime time to gain weight as the average person gains one to two pounds per year from early adulthood into middle adulthood. The average man in his 20s weighs around 185 pounds and by his 30s weighs approximately 200 pounds. The average American woman weighs 162 pounds in her 20s and 170 pounds in her 30s. 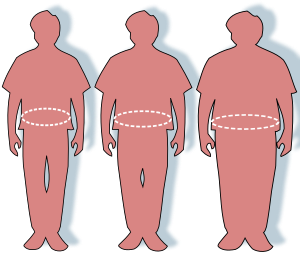 The American obesity crisis is also reflected worldwide (Wighton, 2016). In 2014, global obesity rates for men were measured at 10.8% and among women 14.9%. This translates to 266 million obese men and 375 million obese women in the world, and more people were identified as obese than underweight. Although obesity is seen throughout the world, more obese men and women live in China and the USA than in any other country. Figure 7.6 illustrates how waist circumference is also used as a measure of obesity. Figure 7.7 demonstrates the percentage growth for males and females identified as obese between 1960 and 2012.

Causes of Obesity: According to the Centers for Disease Control and Prevention (CDC) (2016), obesity originates from a complex set of contributing factors, including one’s environment, behavior, and genetics. Societal factors include culture, education, food marketing and promotion, the quality of food, and the physical activity environment available. Behaviors leading to obesity include diet, the amount of physical activity, and medication use. Lastly, there does not appear to be a single gene responsible for obesity. Rather, research has identified variants in several genes that may contribute to obesity by increasing hunger and food intake. Another genetic explanation is the mismatch between today’s environment and “energy-thrifty genes” that multiplied in the distant past, when food sources were unpredictable. The genes that helped our ancestors survive occasional famines are now being challenged by environments in which food is plentiful all the time. Overall, obesity most likely results from complex interactions among the environment and multiple genes. 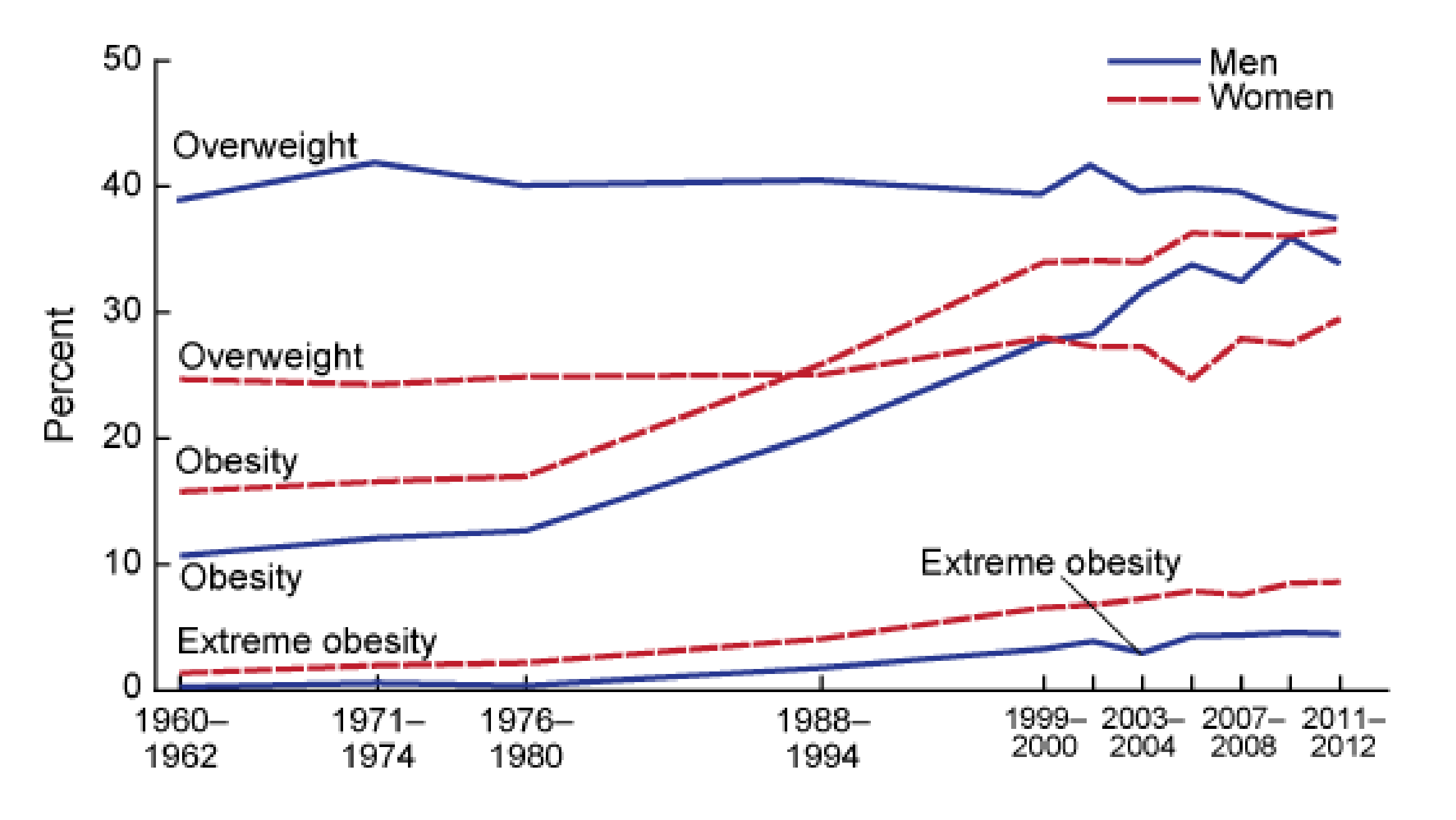 Obesity Health Consequences: Obesity is considered to be one of the leading causes of death in the United States and worldwide. Additionally, the medical care costs of obesity in the United States were estimated to be $147 billion in 2008. According to the CDC (2016) compared to those with a normal or healthy weight, people who are obese are at increased risk for many serious diseases and health conditions including: