Baumrind (1971) identified a model of parenting that focuses on the level of control/ expectations that parents have regarding their children and how warm/responsive they are. This model resulted in four parenting styles. In general, children develop greater competence and self-confidence when parents have high, but reasonable expectations for children’s behavior, communicate well with them, are warm, loving and responsive, and use reasoning, rather than coercion as preferred responses to children’s misbehavior. This kind of parenting style has been described as Authoritative (Baumrind, 2013). Authoritative parents are supportive and show interest in their kids’ activities, but are not overbearing and allow them to make constructive mistakes. Parents allow negotiation where appropriate, and consequently this type of parenting is considered more democratic.

Authoritarian, is the traditional model of parenting in which parents make the rules and children are expected to be obedient. Baumrind suggests that authoritarian parents tend to place maturity demands on their children that are unreasonably high and tend to be aloof and distant. Consequently, children reared in this way may fear rather than respect their parents and, because their parents do not allow discussion, may take out their frustrations on safer targets- perhaps as bullies toward peers.

Permissive parenting involves holding expectations of children that are below what could be reasonably expected from them. Children are allowed to make their own rules and determine their own activities. Parents are warm and communicative, but provide little structure for their children. Children fail to learn self-discipline and may feel somewhat insecure because they do not know the limits.

Uninvolved parents are disengaged from their children. They do not make demands on their children and are non-responsive. These children can suffer in school and in their relationships with their peers (Gecas & Self, 1991).

Keep in mind that most parents do not follow any model completely. Real people tend to fall somewhere in between these styles. Sometimes parenting styles change from one child to the next or in times when the parent has more or less time and energy for parenting. Parenting styles can also be affected by concerns the parent has in other areas of his or her life. For example, parenting styles tend to become more authoritarian when parents are tired and perhaps more authoritative when they are more energetic. Sometimes parents seem to change their parenting approach when others are around, maybe because they become more self-conscious as parents or are concerned with giving others the impression that they are a “tough” parent or an “easy- going” parent. Additionally, parenting styles may reflect the type of parenting someone saw modeled while growing up. See Table 4.3 for Baumrind’s parenting style descriptions. 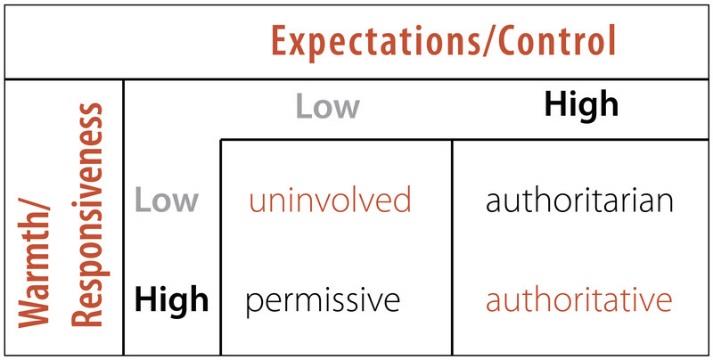 Culture: The impact of culture and class cannot be ignored when examining parenting styles. The model of parenting described above assumes that the authoritative style is the best because this style is designed to help the parent raise a child who is independent, self-reliant and responsible. These are qualities favored in “individualistic” cultures such as the United States, particularly by the middle class. However, in “collectivistic” cultures such as China or Korea, being obedient and compliant are favored behaviors. Authoritarian parenting has been used historically and reflects cultural need for children to do as they are told. African-American, Hispanic and Asian parents tend to be more authoritarian than non-Hispanic whites. In societies where family members’ cooperation is necessary for survival, rearing children who are independent and who strive to be on their own makes no sense. But in an economy based on being mobile in order to find jobs and where one’s earnings are based on education, raising a child to be independent is very important.

In a classic study on social class and parenting styles Kohn (1977) explains that parents tend to emphasize qualities that are needed for their own survival when parenting their children. Working class parents are rewarded for being obedient, reliable, and honest in their jobs. They are not paid to be independent or to question the management; rather, they move up and are considered good employees if they show up on time, do their work as they are told, and can be counted on by their employers. Consequently, these parents reward honesty and obedience in their children. Middle class parents who work as professionals are rewarded for taking initiative, being self-directed, and assertive in their jobs. They are required to get the job done without being told exactly what to do. They are asked to be innovative and to work independently. These parents encourage their children to have those qualities as well by rewarding independence and self-reliance. Parenting styles can reflect many elements of culture.