Piaget’s stage that coincides with early childhood is the Preoperational Stage. According to Piaget, this stage occurs from the age of 2 to 7 years. In the preoperational stage, children use symbols to represent words, images, and ideas, which is why children in this stage engage in pretend play. A child’s arms might become airplane wings as she zooms around the room, or a child with a stick might become a brave knight with a sword. Children also begin to use language in the preoperational stage, but they cannot understand adult logic or mentally manipulate information. The term Operational refers to logical manipulation of information, so children at this stage are considered pre-operational. Children’s logic is based on their own personal knowledge of the world so far, rather than on conventional knowledge. 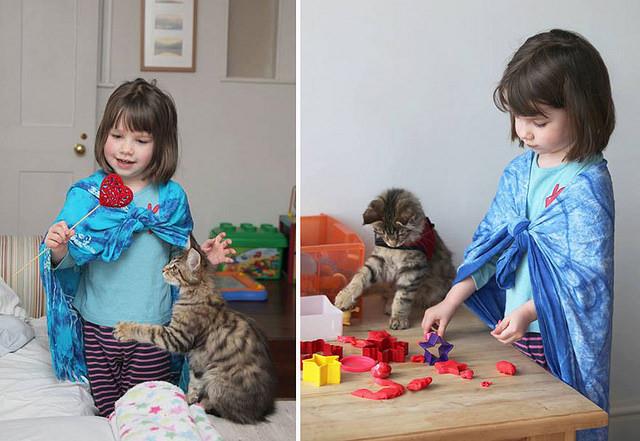 The preoperational period is divided into two stages: The Symbolic Function Substage occurs between 2 and 4 years of age and is characterized by the child being able to mentally represent an object that is not present and a dependence on perception in problem solving. The Intuitive Thought Substage, lasting from 4 to 7 years, is marked by greater dependence on intuitive thinking rather than just perception (Thomas, 1979). At this stage, children ask many questions as they attempt to understand the world around them using immature reasoning. Let’s examine some of Piaget’s assertions about children’s cognitive abilities at this age.

Pretend Play: Pretending is a favorite activity at this time. A toy has qualities beyond the way it was designed to function and can now be used to stand for a character or object unlike anything originally intended. A teddy bear, for example, can be a baby or the queen of a faraway land. Piaget believed that children’s pretend play helped children solidify new schemata they were developing cognitively. This play, then, reflected changes in their conceptions or thoughts. However, children also learn as they pretend and experiment. Their play does not simply represent what they have learned (Berk, 2007).

Egocentrism: Egocentrism in early childhood refers to the tendency of young children not to be able to take the perspective of others, and instead the child thinks that everyone sees, thinks, and feels just as they do. An egocentric child is not able to infer the perspective of other people and instead attributes his own perspective to situations. For example, ten year-old Keiko’s birthday is coming up, so her mom takes 3 year-old Kenny to the toy store to choose a present for his sister. He selects an Iron Man action figure for her, thinking that if he likes the toy, his sister will too. 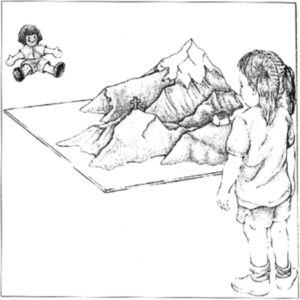 Piaget’s classic experiment on egocentrism involved showing children a three dimensional model of a mountain and asking them to describe what a doll that is looking at the mountain from a different angle might see (see Figure 4.9). Children tend to choose a picture that represents their own, rather than the doll’s view. By age 7 children are less self-centered.

However, even younger children when speaking to others tend to use different sentence structures and vocabulary when addressing a younger child or an older adult. This indicates some awareness of the views of others.

Figure 4.10 Conservation of Liquid. Does pouring liquid in a tall, narrow container make it have more?

Conservation Errors: Conservation refers to the ability to recognize that moving or rearranging matter does not change the quantity. Let’s look at Kenny and Keiko again. Dad gave a slice of pizza to 10-year-old Keiko and another slice to 3-year-old Kenny. Kenny’s pizza slice was cut into five pieces, so Kenny told his sister that he got more pizza than she did. Kenny did not understand that cutting the pizza into smaller pieces did not increase the overall amount. This was because Kenny exhibited Centration, or focused on only one characteristic of an object to the exclusion of others. Kenny focused on the five pieces of pizza to his sister’s one piece even though the total amount was the same. Keiko was able to consider several characteristics of an object than just one. Because children have not developed this understanding of conservation, they cannot perform mental operations.
The classic Piagetian experiment associated with conservation involves liquid (Crain, 2005). As seen in Figure 4.10, the child is shown two glasses (as shown in a) which are filled to the same level and asked if they have the same amount. Usually the child agrees they have the same amount.

The experimenter then pours the liquid in one glass to a taller and thinner glass (as shown in b). The child is again asked if the two glasses have the same amount of liquid. The preoperational child will typically say the taller glass now has more liquid because it is taller (as shown in c). The child has centrated on the height of the glass and fails to conserve.

Classification Errors: Preoperational children have difficulty understanding that an object can be classified in more than one way. For example, if shown three white buttons and four black buttons and asked whether there are more black buttons or buttons, the child is likely to respond that there are more black buttons. They do not consider the general class of buttons. Because children lack these general classes, their reasoning is typically Transductive, that is, making faulty inferences from one specific example to another. For example, Piaget’s daughter Lucienne stated she had not had her nap, therefore it was not afternoon. She did not understand that afternoons are a time period and her nap was just one of many event that occurred in the afternoon (Crain, 2005). As the child’s vocabulary improves and more schemata are developed, the ability to classify objects improves.

Animism: Animism refers to attributing life-like qualities to objects. The cup is alive, the chair that falls down and hits the child’s ankle is mean, and the toys need to stay home because they are tired. Cartoons frequently show objects that appear alive and take on lifelike qualities.

Young children do seem to think that objects that move may be alive, but after age three, they seldom refer to objects as being alive (Berk, 2007).

Critique of Piaget: Similar to the critique of the sensorimotor period, several psychologists have attempted to show that Piaget also underestimated the intellectual capabilities of the preoperational child. For example, children’s specific experiences can influence when they are able to conserve. Children of pottery makers in Mexican villages know that reshaping clay does not change the amount of clay at much younger ages than children who do not have similar experiences (Price-Williams, Gordon, & Ramirez, 1969). Crain (2005) indicated that preoperational children can think rationally on mathematical and scientific tasks, and they are not as egocentric as Piaget implied. Research on Theory of Mind (discussed later in the chapter) has demonstrated that children overcome egocentrism by 4 or 5 years of age, which is sooner than Piaget indicated.