Now we turn our attention to prenatal development which is divided into three periods: The germinal period, the embryonic period, and the fetal period. The following is an overview of some of the changes that take place during each period. 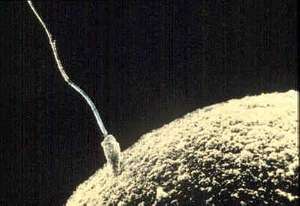 Figure 2.4 Sperm and Ovum at Conception

The germinal period (about 14 days in length) lasts from conception to implantation of the fertilized egg in the lining of the uterus (See Figure 2.5). At ejaculation millions of sperm are released into the vagina, but only a few reach the egg and typically only one fertilizes the egg. Once a single sperm has entered the wall of the egg, the wall becomes hard and prevents other sperm from entering. After the sperm has entered the egg, the tail of the sperm breaks off and the head of the sperm, containing the genetic information from the father, unites with the nucleus of the egg. It is typically fertilized in the top section of the fallopian tube and continues its journey to the uterus. As a result, a new cell is formed. This cell, containing the combined genetic information from both parents, is referred to as a zygote.

Mitosis is a fragile process and fewer than one half of all zygotes survive beyond the first two weeks (Hall, 2004). Some of the reasons for this include the egg and sperm do not join properly, thus their genetic material does not combine, there is too little or damaged genetic material, the zygote does not replicate, or the blastocyst does not implant into the uterine wall. The failure rate is higher for in vitro conceptions. Figure 2.5 illustrates the journey of the ova from its release to its fertilization, cell duplication, and implantation into the uterine lining. 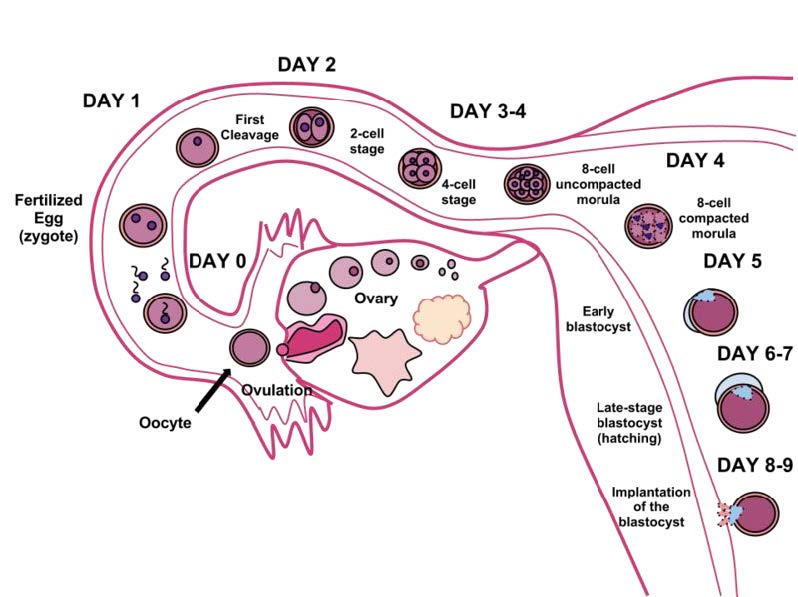 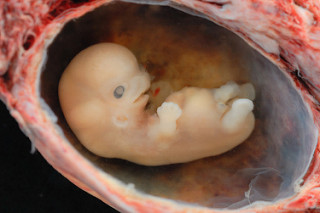 Figure 2.6 The Embryo by Lunar Caustic

Starting the third week the blastocyst has implanted in the uterine wall. Upon implantation this multi-cellular organism is called an embryo. Now blood vessels grow forming the placenta. The placenta is a structure connected to the uterus that provides nourishment and oxygen from the mother to the developing embryo via the umbilical cord. During this period, cells continue to differentiate. Growth during prenatal development occurs in two major directions: from head to tail called cephalocaudal development and from the midline outward referred to as proximodistal development. This means that those structures nearest the head develop before those nearest the feet and those structures nearest the torso develop before those away from the center of the body (such as hands and fingers). The head develops in the fourth week and the precursor to the heart begins to pulse. In the early stages of the embryonic period, gills and a tail are apparent. However, by the end of this stage they disappear and the organism takes on a more human appearance. About 20 percent of organisms fail during the embryonic period, usually due to gross chromosomal abnormalities. As in the case of the germinal period, often the mother does not yet know that she is pregnant. It is during this stage that the major structures of the body are taking form making the embryonic period the time when the organism is most vulnerable to the greatest amount of damage if exposed to harmful substances. Potential mothers are not often aware of the risks they introduce to the developing embryo during this time. The embryo is approximately 1 inch in length and weighs about 4 grams at the end of eight weeks. The embryo can move and respond to touch at this time.

From the ninth week until birth, the organism is referred to as a fetus. During this stage, the major structures are continuing to develop. By the third month, the fetus has all its body parts including external genitalia. In the following weeks, the fetus will develop hair, nails, teeth and the excretory and digestive systems will continue to develop. The fetus is about 3 inches long and weighs about 28 grams.

During the 4th – 6th months, the eyes become more sensitive to light and hearing develops. The respiratory system continues to develop, and reflexes such as sucking, swallowing and hiccupping, develop during the 5th month. Cycles of sleep and wakefulness are present at this time as well. The first chance of survival outside the womb, known as the age of viability is reached at about 24 weeks (Morgan, Goldenberg, & Schulkin, 2008). Many practitioners hesitate to resuscitate before 24 weeks. The majority of the neurons in the brain have developed by 24 weeks, although they are still rudimentary, and the glial or nurse cells that support neurons continue to grow. At 24 weeks the fetus can feel pain (Royal College of Obstetricians and Gynecologists, 1997). 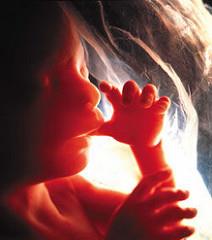 Between the 7th – 9th months, the fetus is primarily preparing for birth. It is exercising its muscles and its lungs begin to expand and contract. The fetus gains about 5 pounds and 7 inches during this last trimester of pregnancy, and during the 8th month a layer of fat develops under the skin. This layer of fat serves as insulation and helps the baby regulate body temperature after birth.

At around 36 weeks the fetus is almost ready for birth. It weighs about 6 pounds and is about 18.5 inches long. By week 37 all of the fetus’s organ systems are developed enough that it could survive outside the mother’s uterus without many of the risks associated with premature birth. The fetus continues to gain weight and grow in length until approximately 40 weeks. By then the fetus has very little room to move around and birth becomes imminent. The progression through the stages is shown in Figure 2.8. 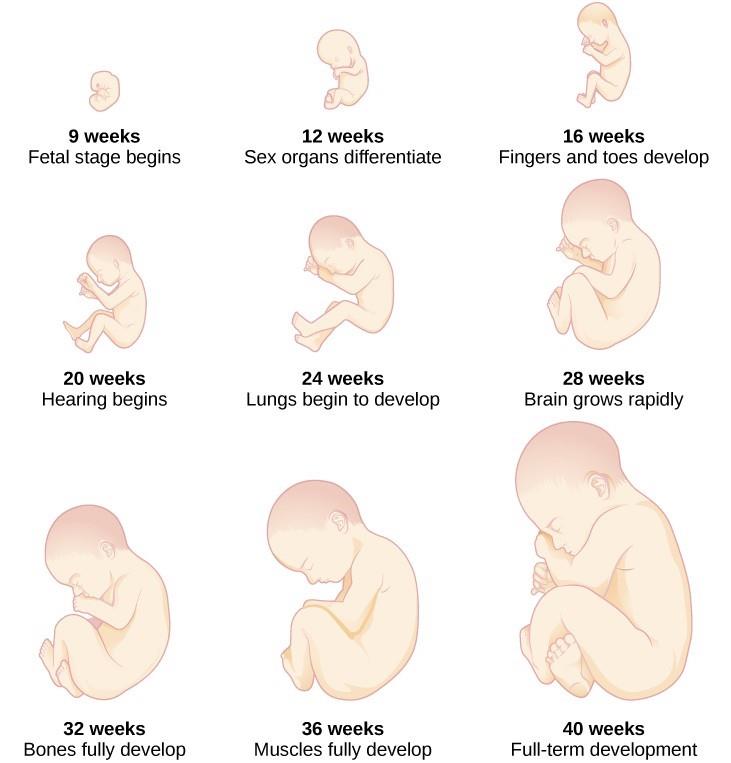