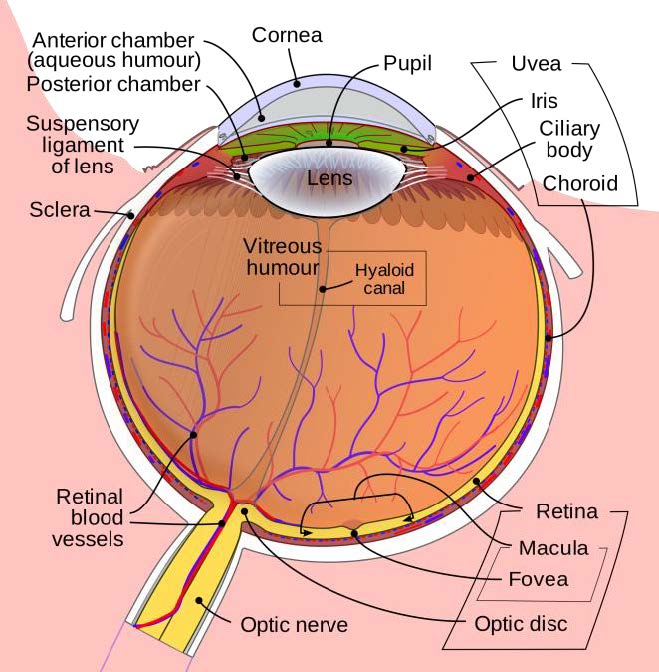 Figure 8.3 Interior of the Human Eye

Vision: A normal change of the eye due to age is presbyopia, which is Latin for “old vision.” It refers to a loss of elasticity in the lens of the eye that makes it harder for the eye to focus on objects that are closer to the person. When we look at something far away, the lens flattens out; when looking at nearby objects tiny muscle fibers around the lens enable the eye to bend the lens. With age these muscles weaken and can no longer accommodate the lens to focus the light. Anyone over the age of 35 is at risk for developing presbyopia. According to the National Eye Institute (NEI) (2016), signs that someone may have presbyopia include:

Another common eye problem people experience as they age are floaters, little spots or “cobwebs” that float around the field of vision. They are most noticeable if you are looking at the sky on a sunny day, or at a lighted blank screen. Floaters occur when the vitreous, a gel-like substance in the interior of the eye, slowly shrinks. As it shrinks, it becomes somewhat stringy, and these strands can cast tiny shadows on the retina. In most cases, floaters are harmless, more of an annoyance than a sign of eye problems. However, floaters that appear suddenly, or that darken and obscure vision can be a sign of more serious eye problems, such a retinal tearing, infection, or inflammation. People who are very nearsighted (myopic), have diabetes, or who have had cataract surgery are also more likely to have floaters (NEI, 2009).

During midlife, adults may begin to notice a drop in scotopic sensitivity, the ability to see in dimmer light. By age 60, the retina receives only one third as much light as it did at age 20, making working in dimmer light more difficult (Jackson & Owsley, 2000). Night vision is also affected as the pupil loses some of its ability to open and close to accommodate drastic changes in light. Eyes become more sensitive to glare from headlights and street lights making it difficult to see people and cars, and movements outside of our direct line of sight (NIH, 2016c).

Finally, some people experience dry eye syndrome, which occurs when the eye does not produce tears properly, or when the tears evaporate too quickly because they are not the correct consistency (NEI, 2013). While dry eye can affect people at any age, nearly 5 million Americans over the age of 50 experience dry eye. It affects women more than men, especially after menopause. Women who experienced an early menopause may be more likely to experience dry eye, which can cause surface damage to the eye. 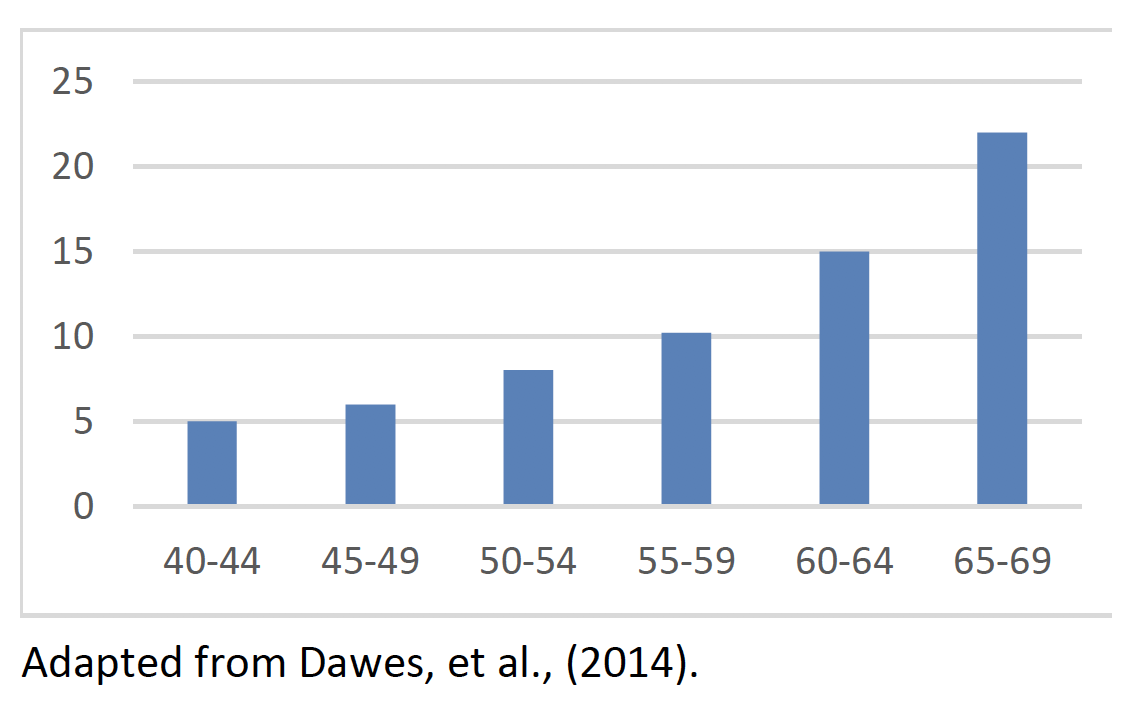 Hearing: Hearing problems increase during middle adulthood. According to a recent UK study (Dawes et al., 2014), the rate of hearing problems in their sample doubled between the ages of 40 and 55 and tripled by age 64. Similar statistics are found in U.S. samples of middle-aged adults. Prior to age 40, about 5.5% of adults report hearing problems. This jumps to 19% among 40 to 69 year-olds (American Psychological Association, 2016). Middle-aged adults may experience more problems understanding speech when in noisy environments, in comparison to younger adults (Füllgrabe, Moore, & Stone, 2015; Neidleman, Wambacq, Besing, Spitzer, & Koehnke, 2015). As we age we also lose the ability to hear higher frequencies (Humes, Kewley-Port, Fogerty, & Kinney, 2010). Hearing changes are more common among men than women, but males may underestimate their hearing problems (Uchida, Nakashima, Ando, Niino, & Shimokata, 2003). For many adults, hearing loss accumulates after years of being exposed to intense noise levels. Men are more likely to work in noisy occupations. Hearing loss is also exacerbated by cigarette smoking, high blood pressure, and stroke. Most hearing loss could be prevented by guarding against being exposed to extremely noisy environments.