We all know that stress plays a major role in our mental and physical health, but what exactly is stress? The term stress is defined as a pattern of physical and psychological responses in an organism after it perceives a threatening event that disturbs its homeostasis and taxes its abilities to cope with the event (Hooker & Pressman, 2016). Stress was originally derived from the field of mechanics where it is used to describe materials under pressure. The word was first used in a psychological manner by researcher Hans Selye, who was examining the effect of an ovarian hormone that he thought caused sickness in a sample of rats. Surprisingly, he noticed that almost any injected hormone produced this same sickness. He smartly realized that it was not the hormone under investigation that was causing these problems, but instead the aversive experience of being handled and injected by researchers led to high physiological arousal, and eventually to health problems like ulcers. 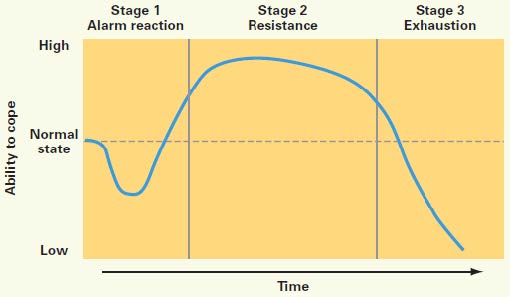 Selye (1946) coined the term stressor to label a stimulus that had this effect on the body (that is, causing stress). He developed a model of the stress response called the General Adaptation Syndrome, which is a three-phase model of stress, which includes a mobilization of physiological resources phase, a coping phase, and an exhaustion phase (i.e., when an organism fails to cope with the stress adequately and depletes its resources).

Psychologists have studied stress in a myriad of ways, and it is not just major life stressor (e.g., a family death, a natural disaster) that increase the likelihood of getting sick. Stress can result from negative events, chronically difficult situations, a biological fight-or-flight response, and as clinical illness, such as post-traumatic stress disorder (PTSD). Even small daily hassles, like getting stuck in traffic or fighting with your friend, can raise your blood pressure, alter your stress hormones, and even suppress your immune system function (DeLongis, Folkman, & Lazarus, 1988; Twisk, Snel, Kemper, & van Machelen, 1999). Stress continues to be one of the most important and well-studied psychological correlates of illness, because excessive stress causes potentially damaging wear and tear on the body and can influence almost any disease process.

Dispositions and Stress: Negative dispositions and personality traits have been strongly tied to an array of health risks. One of the earliest negative trait-to-health connections was discovered in the 1950s by two cardiologists. They made the interesting discovery that there were common behavioral and psychological patterns among their heart patients that were not present in other patient samples. This pattern included being competitive, impatient, hostile, and time urgent. They labeled it Type A Behavior. Importantly, it was found to be associated with double the risk of heart disease as compared with Type B Behavior (absence of Type A behaviors) (Friedman & Rosenman, 1959). Since the 1950s, researchers have discovered that it is the hostility and competitiveness components of Type A that are especially harmful to heart health (Iribarren et al., 2000; Matthews, Glass, Rosenman, & Bortner, 1977; Miller, Smith, Turner, Guijarro, & Hallet, 1996). Hostile individuals are quick to get upset, and this angry arousal can damage the arteries of the heart. In addition, given their negative personality style, hostile people often lack a heath-protective supportive social network.

Social Relationships and Stress: Research has shown that the impact of social isolation on our risk for disease and death is similar in magnitude to the risk associated with smoking regularly (Holt-Lunstad, Smith, & Layton, 2010; House, Landis, & Umberson, 1988). In fact, the importance of social relationships for our health is so significant that some scientists believe our body has developed a physiological system that encourages us to seek out our relationships, especially in times of stress (Taylor et al., 2000). Social integration is the concept used to describe the number of social roles that you have (Cohen & Willis, 1985). For example, you might be a daughter, a basketball team member, a Humane Society volunteer, a coworker, and a student. Maintaining these different roles can improve your health via encouragement from those around you to maintain a healthy lifestyle. Those in your social network might also provide you with social support (e.g., when you are under stress). This support might include emotional help (e.g., a hug when you need it), tangible help (e.g., lending you money), or advice. By helping to improve health behaviors and reduce stress, social relationships can have a powerful, protective impact on health, and in some cases, might even help people with serious illnesses stay alive longer (Spiegel, Kraemer, Bloom, & Gottheil, 1989).

Caregiving and Stress: A disabled child, spouse, parent, or other family member is part of the lives of some midlife adults. According to the National Alliance for Caregiving (2015), 40 million Americans provide unpaid caregiving. The typical caregiver is a 49 year-old female currently caring for a 69 year-old female who needs care because of a long-term physical condition. Looking more closely at the age of the recipient of caregiving, the typical caregiver for those 18-49 years of age is a female (61%) caring mostly for her own child (32%) followed by a spouse or partner (17%). When looking at older recipients (50+) who receive care, the typical caregiver is female (60%) caring for a parent (47%) or spouse (10%).

Caregiving places enormous stress on the caregiver. Caregiving for a young or adult child with special needs was associated with poorer global health and more physical symptoms among both fathers and mothers (Seltzer, Floyd, Song, Greenberg, & Hong, 2011). Marital relationships are also a factor in how the caring affects stress and chronic conditions. Fathers who were caregivers identified more chronic health conditions than non-caregiving fathers, regardless of marital quality. In contrast, caregiving mothers reported higher levels of chronic conditions when they reported a high level of marital strain (Kang & Marks, 2014). Age can also make a difference in how one is affected by the stress of caring for a child with special needs. Using data from the Study of Midlife in the Unites States, Ha, Hong, Seltzer and Greenberg (2008) found that older parents were significantly less likely to experience the negative effects of having a disabled child than younger parents. They concluded that an age-related weakening of the stress occurred over time. This follows with the greater emotional stability noted at midlife.

Currently 25% of adult children, mainly baby boomers, provide personal or financial care to a parent (Metlife, 2011). Daughters are more likely to provide basic care and sons are more likely to provide financial assistance. Adult children 50+ who work and provide care to a parent are more likely to have fair or poor health when compared to those who do not provide care. Some adult children choose to leave the work force, however, the cost of leaving the work force early to care for a parent is high. For females, lost wages and social security benefits equals $324,044, while for men it equals $283,716 (Metlife, 2011). This loss can jeopardize the adult child’s financial future. Consequently, there is a need for greater workplace flexibility for working caregivers.

Spousal Care: Certainly caring for a disabled spouse would be a difficult experience that could negatively affect one’s health. However, research indicates that there can be positive health effect for caring for a disabled spouse. Beach, Schulz, Yee and Jackson (2000) evaluated health related outcomes in four groups: Spouses with no caregiving needed (Group 1), living with a disabled spouse but not providing care (Group 2), living with a disabled spouse and providing care (Group 3), and helping a disabled spouse while reporting caregiver strain, including elevated levels of emotional and physical stress (Group 4). Not surprisingly, the participants in Group 4 were the least healthy and identified poorer perceived health, an increase in health-risk behaviors, and an increase in anxiety and depression symptoms. However, those in Group 3 who provided care for a spouse, but did not identify caregiver strain, actually identified decreased levels of anxiety and depression compared to Group 2 and were actually similar to those in Group 1. It appears that greater caregiving involvement was related to better mental health as long as the caregiving spouse did not feel strain. The beneficial effects of helping identified by the participants were consistent with previous research (Krause, Herzog, & Baker, 1992; Schulz et al., 1997).

When caring for a disabled spouse, gender differences have also been identified. Female caregivers of a spouse with dementia experienced more burden, had poorer mental and physical health, exhibited increased depressive symptomatology, took part in fewer health- promoting activities, and received fewer hours of help than male caregivers (Gibbons et al., 2014). This recent study was consistent with previous research findings that women experience more caregiving burden than men, despite similar caregiving situations (Torti, Gwyther, Reed, Friedman, & Schulman, 2004; Yeager, Hyer, Hobbs, & Coyne, 2010). Explanations for why women do not use more external support, which may alleviate some of the burden, include women’s expectations that they should assume caregiving roles (Torti et al, 2004) and their concerns with the opinions of others (Arai, Sugiura, Miura, Washio, & Kudo, 2000). Also contributing to women’s poorer caregiving outcomes is that disabled males are more aggressive than females, especially males with dementia who display more physical and sexual aggression toward their caregivers (Eastley & Wilcock, 1997; Zuidema, de Jonghe, Verhey, & Koopmans, 2009). Female caregivers are certainly at risk for negative consequences of caregiving, and greater support needs to be available to them.

Stress Management: About 20% of Americans report having stress, with 18–33 year-olds reporting the highest levels (American Psychological Association, 2012). Given that the sources of our stress are often difficult to change (e.g., personal finances, current job), a number of interventions have been designed to help reduce the aversive responses to duress, especially related to health. For example, relaxation activities and forms of meditation are techniques that allow individuals to reduce their stress via breathing exercises, muscle relaxation, and mental imagery. Physiological arousal from stress can also be reduced via biofeedback, a technique where the individual is shown bodily information that is not normally available to them (e.g., heart rate), and then taught strategies to alter this signal. This type of intervention has even shown promise in reducing heart and hypertension risk, as well as other serious conditions (Moravec, 2008; Patel, Marmot, & Terry, 1981). Reducing stress does not have to be complicated. For example, exercise is a great stress reduction activity (Salmon, 2001) that has a myriad of health benefits.