Psychological theories of language learning differ in terms of the importance they place on nature and nurture. Remember that we are a product of both nature and nurture. Researchers now believe that language acquisition is partially inborn and partially learned through our interactions with our linguistic environment (Gleitman & Newport, 1995; Stork & Widdowson, 1974).

Learning Theory: Perhaps the most straightforward explanation of language development is that it occurs through the principles of learning, including association and reinforcement (Skinner, 1953). Additionally, Bandura (1977) described the importance of observation and imitation of others in learning language. There must be at least some truth to the idea that language is learned through environmental interactions or nurture. Children learn the language that they hear spoken around them rather than some other language. Also supporting this idea is the gradual improvement of language skills with time. It seems that children modify their language through imitation and reinforcement, such as parental praise and being understood. For example, when a two-year-old child asks for juice, he might say, “me juice,” to which his mother might respond by giving him a cup of apple juice.

However, language cannot be entirely learned. For one, children learn words too fast for them to be learned through reinforcement. Between the ages of 18 months and 5 years, children learn up to 10 new words every day (Anglin, 1993). More importantly, language is more generative than it is imitative. Language is not a predefined set of ideas and sentences that we choose when we need them, but rather a system of rules and procedures that allows us to create an infinite number of statements, thoughts, and ideas, including those that have never previously occurred. When a child says that she “swimmed” in the pool, for instance, she is showing generativity. No adult speaker of English would ever say “swimmed,” yet it is easily generated from the normal system of producing language.

Other evidence that refutes the idea that all language is learned through experience comes from the observation that children may learn languages better than they ever hear them. Deaf children whose parents do not speak ASL very well nevertheless are able to learn it perfectly on their own, and may even make up their own language if they need to (Goldin-Meadow & Mylander, 1998). A group of deaf children in a school in Nicaragua, whose teachers could not sign, invented a way to communicate through made-up signs (Senghas, Senghas, & Pyers, 2005). The development of this new Nicaraguan Sign Language has continued and changed as new generations of students have come to the school and started using the language. Although the original system was not a real language, it is becoming closer and closer every year, showing the development of a new language in modern times.

Chomsky and Nativism: The linguist Noam Chomsky is a believer in the nature approach to language, arguing that human brains contain a Language Acquisition Device that includes a universal grammar that underlies all human language (Chomsky, 1965, 1972). According to this approach, each of the many languages spoken around the world (there are between 6,000 and 8,000) is an individual example of the same underlying set of procedures that are hardwired into human brains. Chomsky’s account proposes that children are born with a knowledge of general rules of syntax that determine how sentences are constructed. Language develops as long as the infant is exposed to it. No teaching, training, or reinforcement is required for language to develop as proposed by Skinner.

Chomsky differentiates between the deep structure of an idea; that is, how the idea is represented in the fundamental universal grammar that is common to all languages, and the surface structure of the idea or how it is expressed in any one language. Once we hear or express a thought in surface structure, we generally forget exactly how it happened. At the end of a lecture, you will remember a lot of the deep structure (i.e., the ideas expressed by the instructor), but you cannot reproduce the surface structure (the exact words that the instructor used to communicate the ideas).

Although there is general agreement among psychologists that babies are genetically programmed to learn language, there is still debate about Chomsky’s idea that there is a universal grammar that can account for all language learning. Evans and Levinson (2009) surveyed the world’s languages and found that none of the presumed underlying features of the language acquisition device were entirely universal. In their search they found languages that did not have noun or verb phrases, that did not have tenses (e.g., past, present, future), and even some that did not have nouns or verbs at all, even though a basic assumption of a universal grammar is that all languages should share these features. 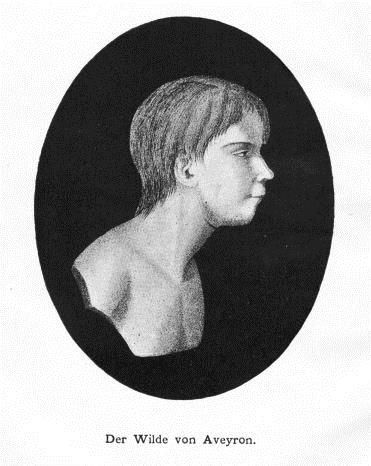 Critical Periods: Anyone who has tried to master a second language as an adult knows the difficulty of language learning. Yet children learn languages easily and naturally. Children who are not exposed to language early in their lives will likely never learn one. Case studies, including Victor the “Wild Child,” who was abandoned as a baby in France and not discovered until he was 12, and Genie, a child whose parents kept her locked in a closet from 18 months until 13 years of age, are (fortunately) two of the only known examples of these deprived children. Both of these children made some progress in socialization after they were rescued, but neither of them ever developed language (Rymer, 1993). This is also why it is important to determine quickly if a child is deaf, and to communicate in sign language immediately. Deaf children who are not exposed to sign language during their early years will likely never learn it (Mayberry, Lock, & Kazmi, 2002). The concept of critical periods highlights the importance of both nature and nurture for language development.

Social pragmatics: Another view emphasizes the very social nature of human language. Language from this view is not only a cognitive skill, but also a social one. Language is a tool humans use to communicate, connect to, influence, and inform others. Most of all, language comes out of a need to cooperate. The social nature of language has been demonstrated by a number of studies that have shown that children use several pre-linguistic skills (such as pointing and other gestures) to communicate not only their own needs, but what others may need. So a child watching her mother search for an object may point to the object to help her mother find it.

Eighteen-month to 30-month-olds have been shown to make linguistic repairs when it is clear that another person does not understand them (Grosse, Behne, Carpenter & Tomasello, 2010). Grosse et al. (2010) found that even when the child was given the desired object, if there had been any misunderstanding along the way (such as a delay in being handed the object, or the experimenter calling the object by the wrong name), children would make linguistic repairs. This would suggest that children are using language not only as a means of achieving some material goal, but to make themselves understood in the mind of another person. 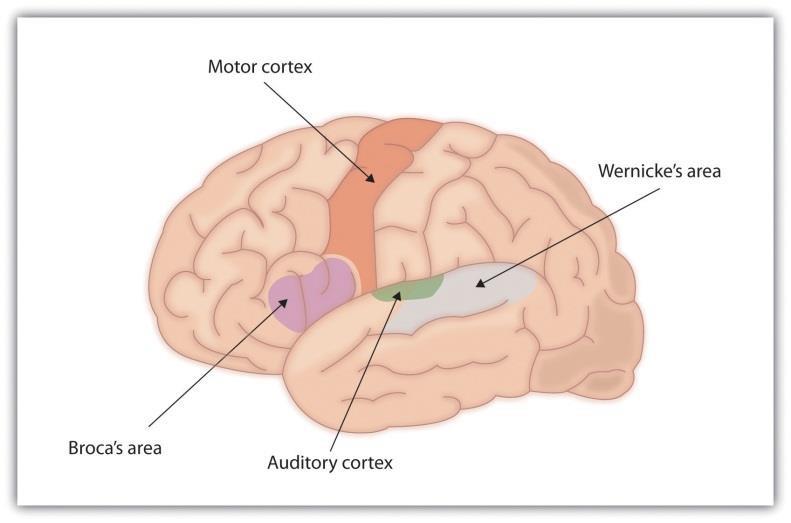 Brain Areas for Language: For the 90% of people who are right-handed, language is stored and controlled by the left cerebral cortex, although for some left-handers this pattern is reversed. These differences can easily be seen in the results of neuroimaging studies that show that listening to and producing language creates greater activity in the left hemisphere than in the right. Broca’s area, an area in front of the left hemisphere near the motor cortex, is responsible for language production (Figure 3.21). This area was first localized in the 1860s by the French physician Paul Broca, who studied patients with lesions to various parts of the brain. Wernicke’s area, an area of the brain next to the auditory cortex, is responsible for language comprehension.