Where do People Die? 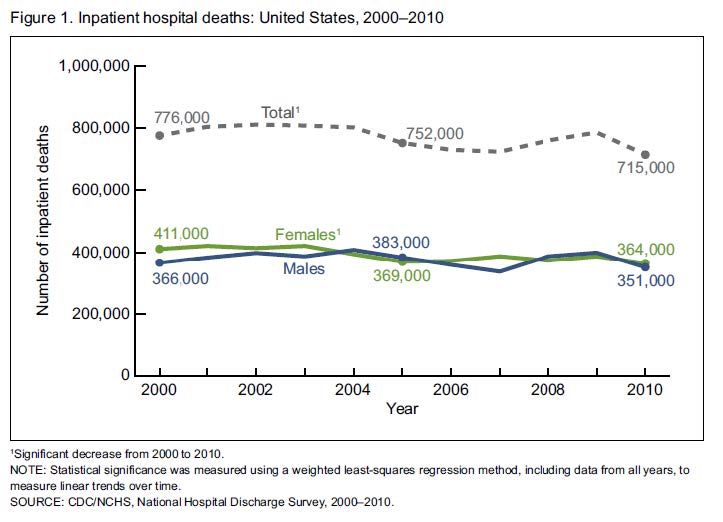 Gathering statistics on the location of death is not a simple matter. Those with terminal illnesses may be going through the process of dying at home or in a nursing home, only to be transported to a hospital in the final hours of their life. Thus, it should not be a surprise that in the United States, more Americans die in hospitals than in any other settings. However, as can be seen in figure 10.4, there has been a decline in the number of people dying in hospital in the last decade (Hall, Levant, & DeFrances, 2013). This decline can be tied to two changes in the U.S. health care system: Medicare, and other private insurance plans, covering the cost of hospice care, and Medicare paying hospitals to encourage less use of inpatient hospital care (IOM, 1997).

Internationally, 54% of deaths in over 45 nations occurred in hospitals, with the most frequent occurring in Japan (78%) and the least frequent occurring in China (20%), according to a study by Broad et al. (2013). They also found that for older adults, 18% of deaths occurred in some form of residential care, such as nursing homes, and that for each decade after age 65, the rate of dying in a such settings increased 10%. In addition, the number of women dying in residential care was considerably higher than for males.