Such is the case with claims of price gouging, the charging of “excessively high” prices, which was exemplified by what occurred in the wake of Hurricane Katrina. Imposing a price ceiling below the equilibrium price may create as many problems as it solves. The basic problem is that the demand for bottled water is dramatically higher, since fresh water supplies were compromised, while the supply of bottled water was less as a result of storm damage.

The question is how to deal with the shortage, that is, how to allocate the limited supply of bottled water among competing needs and wants. Figure 1 depicts the example of price control for water after Hurricane Katrina. 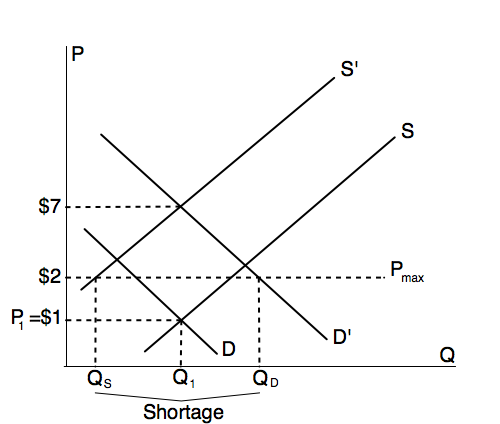 When a price ceiling reduces the legal price of a product, businesses have less incentive to supply the product. Economically speaking, the law of supply says that at lower prices, the quantity supplied will be lower. At the same time, the law of demand states that at a lower price, the quantity demanded will be higher. This can be seen clearly in the graph. So who gets the limited supply? As Shakespeare said, that is the question.