Unemployment is typically described in newspaper or television reports as a percentage or a rate. A recent report might have said, for example, from January 2013 to December 2013, the U.S. unemployment rate dropped from 8.0% to 6.7%, and by the close of 2015, it had fallen to 5.0%. At a glance, the changes between the percentages may seem small. But remember that the U.S. economy has about 155 million adults who either have jobs or are looking for them. A rise or fall of just 0.1% in the unemployment rate of 155 million potential workers translates into 155,000 people, which is roughly the total population of a city like Syracuse, New York, Brownsville, Texas, or Pasadena, California. Large rises in the unemployment rate mean large numbers of job losses. The decrease in unemployment from 8% in 6.7% 2013 meant an additional 2.02 million people were employed who had previously been looking for work. 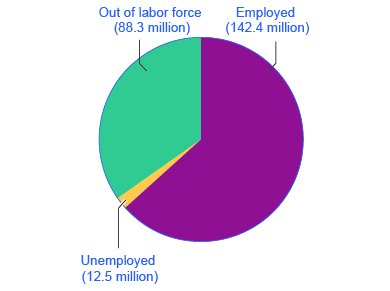 In this example, the unemployment rate can be calculated as 12.5 million unemployed people divided by 155.0 million people in the labor force, which works out to an 8.1% rate of unemployment.

Step 1. Divide the number of people out the labor force (88.3 million) by the total adult (working-age) population (243.2 million).

Based on this survey, unemployment rates are calculated by state, industry, urban and rural areas, gender, age, race or ethnicity, and level of education. A wide variety of other information is available, too. For example, how long have people been unemployed? Did they become unemployed because they quit, or were laid off, or their employer went out of business? Is the unemployed person the only wage earner in the family? The Current Population Survey is a treasure trove of information about employment and unemployment.

The Current Population Survey (CPS) conducted by the United States Census Bureau measures the percentage of the labor force that is unemployed. The establishment payroll survey (EPS) by the Bureau of Labor Statistics is a payroll survey that measures the net change in jobs created for the month.
Licenses and Attributions
CC licensed content, Shared previously