One of the flaws of early Keynesian thinking was its omission of the crowding out effect, which reduces the size of the government spending multiplier and thus the effectiveness of fiscal policy. This criticism can be overstated, though, since the degree of crowding out depends on the state of the economy, among other factors. When the economy is in a deep recession, for example, like the one that began in 2007, savings are sitting idle instead of being used by private borrowers, so government borrowing may result in little or no crowding out.

Government can invest in physical capital directly: roads and bridges; water supply and sewers; seaports and airports; schools and hospitals; plants that generate electricity, like hydroelectric dams or windmills; telecommunications facilities; and weapons used by the military. In 2011, the U.S. federal government budget for Fiscal Year 2012 shows that the United States spent $59.9 billion on transportation, including highways, mass transit, and airports. Table 17.1 shows the total outlay for 2011 for major public physical capital investment by the federal government in the United States. Physical capital related to the military or to residences where people live is omitted from this table, because the focus here is on public investments that have a direct effect on raising output in the private sector.

In some cases, lawmakers make investments in physical capital as a way of spending money in the districts of key politicians. The result may be unnecessary roads or office buildings. Even if a project is useful and necessary, it might be done in a way that is excessively costly, because local contractors who make campaign contributions to politicians appreciate the extra business. On the other hand, governments sometimes do not make the investments they should because a decision to spend on infrastructure does not need to just make economic sense; it must be politically popular as well. Managing public investment so that it is done in a cost-effective way can be difficult.

In most countries, the government plays a large role in society’s investment in human capital through the education system. A highly educated and skilled workforce contributes to a higher rate of economic growth. For the low-income nations of the world, additional investment in human capital seems likely to increase productivity and growth. For the United States, tough questions have been raised about how much increases in government spending on education will improve the actual level of education.

Among economists, discussions of education reform often begin with some uncomfortable facts. As shown in Figure 17.6, spending per student for kindergarten through grade 12 (K–12) increased substantially in real dollars through 2010. The U.S. Census Bureau reports that current spending per pupil for elementary and secondary education rose from $5,001 in 1998 to $10,615 in 2010. However, as measured by standardized tests like the SAT, the level of student academic achievement has barely budged in recent decades. Indeed, on international tests, U.S. students lag behind students from many other countries. (Of course, test scores are an imperfect measure of education for a variety of reasons. It would be difficult, however, to argue that there are not real problems in the U.S. education system and that the tests are just inaccurate.) 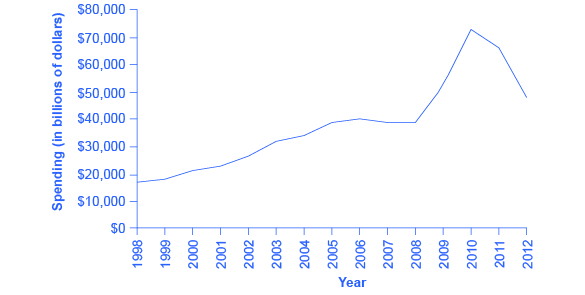 Figure 17.6. Total Spending for Elementary, Secondary, and Vocational Education (1998–2012) in the United States. The graph shows that government spending on education was continually increasing up until 2006 where it leveled off until 2008 when it increased dramatically. Since 2010, spending has steadily decreased. (Source: Office of Management and Budget).

The fact that increased financial resources have not brought greater measurable gains in student performance has led some education experts to question whether the problems may be due to structure, not just to the resources spent.

Other government programs seek to increase human capital either before or after the K–12 education system. Programs for early childhood education, like the federal Head Start program, are directed at families where the parents may have limited educational and financial resources. Government also offers substantial support for universities and colleges. For example, in the United States about 60% of students take at least a few college or university classes beyond the high school level. In Germany and Japan, about half of all students take classes beyond the comparable high school level. In the countries of Latin America, only about one student in four takes classes beyond the high school level, and in the nations of sub-Saharan Africa, only about one student in 20.

Not all spending on educational human capital needs to happen through the government: many college students in the United States pay a substantial share of the cost of their education. If low-income countries of the world are going to experience a widespread increase in their education levels for grade-school children, government spending seems likely to play a substantial role. For the U.S. economy, and for other high-income countries, the primary focus at this time is more on how to get a bigger return from existing spending on education and how to improve the performance of the average high school graduate, rather than dramatic increases in education spending.

Research and development (R&D) efforts are the lifeblood of new technology. According to the National Science Foundation, federal outlays for research, development, and physical plant improvements to various governmental agencies have remained at an average of 8.8% of GDP. About one-fifth of U.S. R&D spending goes to defense and space-oriented research. Although defense-oriented R&D spending may sometimes produce consumer-oriented spinoffs, R&D that is aimed at producing new weapons is less likely to benefit the civilian economy than direct civilian R&D spending.

Fiscal policy can encourage R&D using either direct spending or tax policy. Government could spend more on the R&D that is carried out in government laboratories, as well as expanding federal R&D grants to universities and colleges, nonprofit organizations, and the private sector. By 2010, the federal share of R&D outlays totaled $137.5 billion, or about 4% of the federal government’s overall budget, according to data from the National Science Foundation. Fiscal policy can also support R&D through tax incentives, which allow firms to reduce their tax bill as they increase spending on research and development.

Investment in physical capital, human capital, and new technology is essential for long-term economic growth, as summarized in Table 17.2. In a market-oriented economy, private firms will undertake most of the investment in physical capital, and fiscal policy should seek to avoid a long series of outsized budget deficits that might crowd out such investment. The effects of many growth-oriented policies will be seen very gradually over time, as students are better educated, physical capital investments are made, and new technologies are invented and implemented.

Self Check: Crowding Out Revisited