The neoclassical view of unemployment tends to focus attention away from the problem of cyclical unemployment—that is, unemployment caused by recession—while putting more attention on the issue of the rates of unemployment that prevail even when the economy is operating at potential GDP. To put it another way, the neoclassical view of unemployment tends to focus on how public policy can be adjusted to reduce the natural rate of unemployment. Such policy changes might involve redesigning unemployment and welfare programs so that they support those in need, but also offer greater encouragement for job-hunting. It might involve redesigning business rules with an eye to whether they are unintentionally discouraging businesses from taking on new employees. It might involve building institutions to improve the flow of information about jobs and the mobility of workers, to help bring workers and employers together more quickly. For those workers who find that their skills are permanently no longer in demand (for example, the structurally unemployed), policy can be designed to provide opportunities for retraining so that these workers can reenter the labor force and seek employment.

If aggregate demand rises rapidly in the neoclassical model, in the long run it leads only to inflationary pressures. Figure 12.8 shows a vertical long-run AS curve and three different levels of aggregate demand, rising from AD0 to AD1 to AD2. As the macroeconomic equilibrium rises from E0 to E1 to E2, the price level rises, but real GDP does not budge; nor does the rate of unemployment, which adjusts to its natural rate. Conversely, reducing inflation has no long-term costs, either. Think about Figure 12.8 in reverse, as the aggregate demand curve shifts from AD2 to AD1 to AD0, and the equilibrium moves from E2 to E1 to E0. During this process, the price level falls, but, in the long run, neither real GDP nor the natural rate of unemployment is changed. 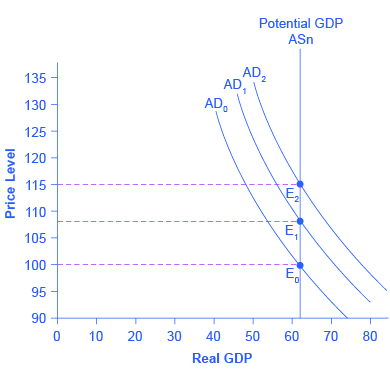 Figure 12.8. How Aggregate Demand Determines the Price Level in the Long Run As aggregate demand shifts to the right, from AD0 to AD1 to AD2, real GDP in this economy and the level of unemployment do not change. However, there is inflationary pressure for a higher price level as the equilibrium changes from E0 to E1 to E2.

Visit this website to read about how inflation and unemployment are related.

Neoclassical economists believe that the economy will rebound out of a recession or eventually contract during an expansion because prices and wage rates are flexible and will adjust either upward or downward to restore the economy to its potential GDP. Thus, the key policy question for neoclassicals is how to promote growth of potential GDP. We know that economic growth ultimately depends on the growth rate of long-term productivity. Productivity measures how effective inputs are at producing outputs. We know that U.S. productivity has grown on average about 2% per year. That means that the same amount of inputs produce 2% more output than the year before. We also know that productivity growth varies a great deal in the short term due to cyclical factors. It also varies somewhat in the long term. From 1953–1972, U.S. labor productivity (as measured by output per hour in the business sector) grew at 3.2% per year. From 1973–1992, productivity growth declined significantly to 1.8% per year. Then, from 1993–2012, productivity growth increased to 2.2% per year. The neoclassical economists believe the underpinnings of long-run productivity growth to be an economy’s investments in human capital, physical capital, and technology, operating together in a market-oriented environment that rewards innovation. Promotion of these factors is what government policy should focus on.

Let’s summarize what neoclassical economists recommend for macroeconomic policy. Neoclassical economists do not believe in “fine-tuning” the economy. They believe that economic growth is fostered by a stable economic environment with a low rate of inflation. Similarly, tax rates should be low and unchanging. In this environment, private economic agents can make the best possible investment decisions, which will lead to optimal investment in physical and human capital as well as research and development to promote improvements in technology.

Table 12.2 summarizes the key differences between the two schools of thought.