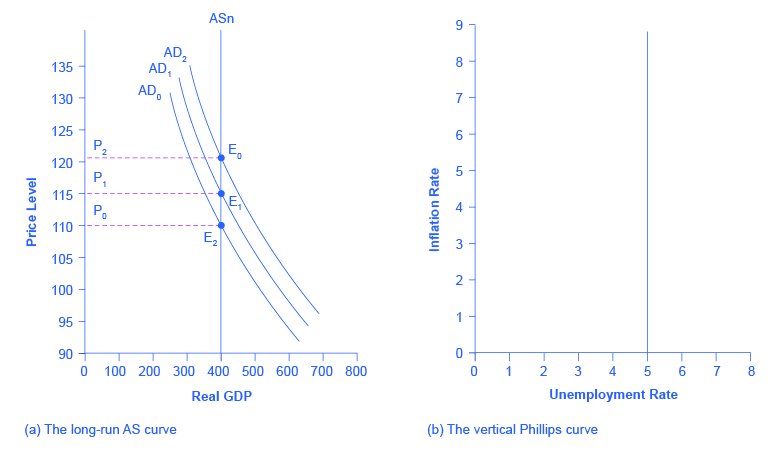 Figure 12.6. From a Long-Run AS Curve to a Long-Run Phillips Curve. (a) With a vertical AS curve, shifts in aggregate demand do not alter the level of output but do lead to changes in the price level. Because output is unchanged between the equilibria E0, E1, and E2, all unemployment in this economy will be due to the natural rate of unemployment. (b) If the natural rate of unemployment is 5%, then the Phillips curve will be vertical. That is, regardless of changes in the price level, the unemployment rate remains at 5%.

Suppose that you have collected data for years on the rates of inflation and unemployment and recorded them in a table, such as Table 12.1. How do you interpret that information?

Step 1. Plot the data points in a graph with inflation rate on the vertical axis and unemployment rate on the horizontal axis. Your graph will appear similar to Figure 12.7. 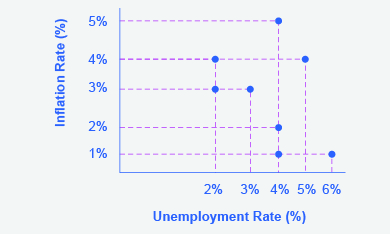 Step 2. What patterns do you see in the data? You should notice that there are years when unemployment falls but inflation rises, and other years where unemployment rises and inflation falls.

In the Keynesian perspective, the primary focus is on getting the level of aggregate demand right in relationship to an upward-sloping aggregate supply curve. That is, AD should be adjusted so that the economy produces at its potential GDP, not so low that cyclical unemployment results and not so high that inflation results. In the neoclassical perspective, aggregate supply will determine output at potential GDP, unemployment is determined by the natural rate of unemployment churned out by the forces of supply and demand in the labor market, and shifts in aggregate demand are the primary determinant of changes in the price level.

Visit this website to read about the effects of economic intervention.

Self Check: No Phillips Curve Tradeoff