Anyone who has been in the unpleasant position of changing a dirty nappy will know that normally your first instinct is to get it as far away from it as possible. So it might seem strange that American artist Mary Kelly (born 1941) took the liners of her son’s used cloth nappies, printed them with details of his diet, and displayed them as artworks. Causing some controversy at their debut exhibition, the nappy liners formed the first part of the epic and fascinating Post-Partum Document (1973-79) 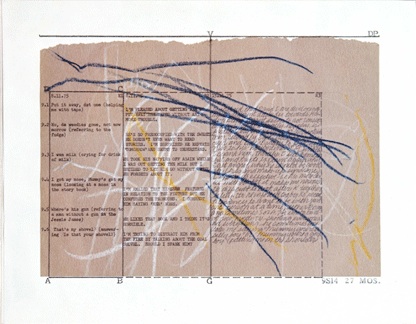 Kelly has made works that examine complicated social issues such as the ramifications of war, and the politics of how our identities are constructed. In Post-Partum Document, she was engaging in a discussion that was happening at the emergence of second-wave feminism about the way in which women worked in the home. At a time where many feminist artists were looking at reclaiming the body through performance – such as Marina Abramovic and Carole Schneeman – or revising history in order to incorporate our foremothers – such as Judy Chicago – Kelly looked more directly at the invisible daily experience of women engaged in domestic labour.

Post-Partum Document consists of six sections of documentation that follow the development of Kelly’s son, Kelly Barrie, from birth until the age of five. Kelly intricately charts her relationship with her son, and her changing role as a mother by writing on artefacts associated with child care: baby clothes, his drawings, items he collects, and his first efforts at writing. In addition, there are detailed analytical texts that exist in parallel to the objects.

In “Documentation III: Analysed Markings and Diary Perspective Schema,” Kelly includes three types of text. She describes them in the documentation that accompanies their exhibition as:

R1  A condensed transcription of the child’s conversation, playing it back immediately following the recording session
R2  A transcription of the mother’s inner speech in relation to R1, recalling it during a playback later the same day
R3  A secondary revision of R2, one week later, locating the conversation (as object) within a specific time interval (as spatial metaphor) and rendering it “in perspective” (as a mnemic system)

Kelly’s documentations that accompany the work are heavily indebted to Lacanian psychoanalysis, which conceives of the unconscious as being structured like a language. This is interesting in relation to Post-Partum Document because it is so layered with text. The quote above strongly contrasts with extracts taken from column R1 (the transcripts) from the piece dated 27.9.75, which is written in lowercase on a typewriter. They state:

We can see how much range there is in the text that she uses. Adding to this, there are the sections in R2 that provide a picture of an adult’s day to day interaction with a small child. This column is typed in capital letters, using the aesthetic of the text in order to separate the voices. From the same piece R2 reads:

I say it would be nice to take it outside as it’s very windy but it’s also very late so I try to change the subject.
As I started this game of pretending to fly the kite standing on a chair holding it and making sounds like wind, now I’m stuck with it.
He remembers promises very well.

Finally, in section R3, Kelly describes her anxiety following an accident in which her son drank liquid aspirin and had to be rushed to hospital. This section is handwritten and is much longer, with candid text that explores the difficulties of childrearing. A part of this section states:

Sometimes I forget to give him his medicine which makes me feel totally irresponsible or I just feel I wish it was all over i.e. he was “grown up” but my mother says it never ends the worry just goes on and on

Over the top of all this worry and analysis are Kelly Barrie’s drawings. They are typical of the drawings made by a young child, not much more than scribbles on rice paper. However, his lines cut over his mother’s careful work; their carelessness seems all the more free when contrasted with her deliberations.

What makes this piece important is the way in which motherhood – so often seen in art history as a sentimental connection between mother and child – is shown as a difficult and complex relationship. Kelly’s voice does not overbear her son’s, instead it exists in tandem; we see Kelly developing and adapting as much as her child.

This is an extensive project (comprising in total of 139 individual parts) and Kelly’s attention to the material qualities of these mundane objects is outstanding. This piece is a central work within feminist art that is still a relevant and a fascinating picture of what motherhood means for women.