The science of nutrition includes the study of how organisms obtain food from their
environment. An ecosystem is defined as the biological and physical environments and their
interactions with the community of organisms that inhabit those environments as well as the
interactions among the organisms. Human nutrition and the health of the world’s ecosystem
are interdependent, meaning that what we eat and where we get it from affects the world. In
turn, the health of the earth influences our health. The term sustainability is used to indicate
the variety of approaches aimed at improving our way of life. Sustainability promotes the
development of conditions under which people and nature can interact harmoniously. It is
based upon the principle that everything needed for human survival depends upon the natural
environment.
A major theme of sustainability is to ensure that the resources needed for human and
environmental health will continue to exist. A healthy ecosystem, one that is maintained over
time, is harmonious and allows for social and economic fulfillment for present and future
generations. Nutritious foods come from our ecosystem and to ensure its availability for
generations to come, it must be produced and distributed in a sustainable way. The American
Public Health Association (APHA) defines a sustainable food system as “one that provides
healthy food to meet current food needs while maintaining healthy ecosystems that can also
provide food for generations to come with minimal negative impact to the environment.”1
It also states the attributes of a sustainable food system are:

Available
Accessible
Affordable to all
Humane
Just
A sustainable food system does not just include the food and those who consume the food, but
also those that produce the food, like farmers and fishermen, and those who process, package,
distribute, and regulate food. Unfortunately, we have a long way to go to build a sustainable
food system.

The most prominent challenge to building a sustainable food system is to make food available
and accessible to all. The Food and Agricultural Organization of the United Nations (FAO) states
the right to food is a fundamental human right and its mission is to assist in building a foodsecure world. Food security in America (Figure 1.9) is defined as the “access by all people at all
times to enough food for an active, healthy life.”2 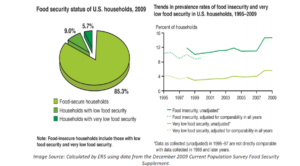 As of 2009, 14.9 percent of households, or 17.4 million people in the United States, had very
low or low food security and these numbers have risen in recent years.3
Food security is defined by the FAO as existing “when all people, at all times, have physical,
social, and economic access to sufficient, safe, and nutritious food which meets their dietary
needs and food preferences for an active and healthy life.” (Figure 1.10) The FAO estimates that
925 million worldwide were undernourished in 2010. Although there was a recent decline in
overall food insecurity (attributable mostly to a decline in undernourished people in Asia), the
number of undernourished people world-wide is still higher than it was in 1970, despite many
national and international goals to reduce it.4 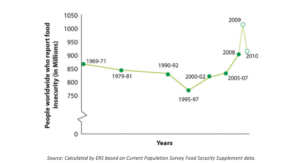 Another challenge to building a sustainable food system is to supply high-quality nutritious
food. The typical American diet does not adhere to dietary guidelines and recommendations, is
unhealthy, and thus costs this country billions of dollars in healthcare. The average American
diet contains too many processed foods with added sugars and saturated fats and not enough
fruits, vegetables, and whole grains. Moreover, the average American takes in more kilocalories
each day than ever before. This shift of the population toward unhealthy, high-calorie diets has
fueled the obesity and diet-related disease crisis in this nation. Overall the cost of food for the
average American household has declined since the 1970s; however, there has been a growth
of “food deserts.” A food desert is a location that does not provide access to affordable, highquality, nutritious food. One of the best examples of a “food desert” is in Detroit, Michigan. The
lower socioeconomic status of the people who live in this city does not foster the building of
grocery stores in the community. Therefore, the most accessible foods are the cheap, highcaloric ones sold in convenience stores. As a result, people who live in Detroit have some of the
highest incidences of obesity, Type 2 diabetes, and cardiovascular disease in the country.
A fourth challenge to building a sustainable food system is to change how we produce, process,
and distribute food. Large agribusiness, complex industrial processing, and massive retail
conglomerations distort the connection we have between the food on our plate and where it
came from. More food is being produced in this nation than ever before, which might sound
good at first. However, some factors that have contributed to higher food production include
using genetically engineered plants, excessive use of herbicides and pesticides, and the
selective promotion of only a few crops by the policy of crop-specific subsidies (money given to
farmers by the federal government). The subsidies are given toward the support of only about
eight crops, most notably corn and soybeans. This policy diminishes the variety of crops,
decreases biodiversity among crops, and supports large agribusiness while disadvantaging
small- and medium-sized farms. Additionally, the whole system of food production, processing,
and distribution is lengthy, requiring a great deal of energy and fossil fuels, and promotes
excessive use of chemicals to preserve foods during transportation and distribution. In fact, the
current US food system uses approximately 22 percent of the energy in this country and is
responsible for at least 20 percent of greenhouse gas emissions.5

Solutions to the Challenges

While these challenges are daunting there are many potential solutions that are gaining
momentum in the United States. The APHA advocates expanding the infrastructure for locally
grown food, improving access to healthy and local food for low-income Americans, providing
education on food origin and production, building up the livelihoods of local farmers, and using
sustainable farming methods. Detroit is currently a “food desert,” but there is a fantastic
example of how to positively impact the growth of a sustainable food system within the city. It
is called the Eastern Market and it is a six-block inner city market with over 250 vendors
marketing local produce, meat, seafood, plants, fresh-cut flowers and much, much more. Unlike
many urban farmers’ markets it sells foods that are of better quality and lower prices than
grocery stores. Its forty-thousand visitors every Saturday demonstrate its success as a
community-based way to foster good nutrition, good health, and social interaction.