Drinking water, also known as potable water or improved drinking water, is water safe enough for drinking and food preparation. Globally, in 2012, 89% of people had access to water suitable for drinking. Nearly 4 billion had access to tap water while another 2.3 billion had access to wells or public taps. 1.8 billion people still use an unsafe drinking water source which may be contaminated by feces. This can result in infectious diarrhea such as cholera and typhoid among others. We will also discuss the category of essential nutrients called Minerals, also known as  Dietary elements or mineral nutrients. Minerals are naturally occurring chemical elements required by living organisms for survival.  Many of the minerals we need are plentiful in a typical scoop of dirt!

Water is essential for life. In the United States, the reference daily intake (RDI) for total water intake is 3.7 liters (about 17 Cups) per day for human males older than 18, and 2.7 liters (about 11 Cups) per day for human females older than 18. These amounts include: drinking water, water in beverages, and water contained in food. The amount of drinking water required is highly variable and depend on factors like: physical activity, age, health issues, and environmental conditions. It is estimated that the average American drinks about one liter of water a day with 95% drinking less than three liters per day. For those working in a hot climate, up to 16 liters a day may be required. Typically in developed countries, like the United States of America, tap water must meet strict drinking water quality standards. If you receive city water, your city sends you an annual Water Quality Report in the mail each year. It is often available online.  Here is a link to the annual water quality report for the City of Sacramento California . You may be surprised to learn that often the water quality of city water exceeds that of bottled water. Here is a great video about bottled Water compared to City Water (also called tap water).

The water your drink often provides some of the minerals you need for good health. Inorganic minerals can enter surface water and ground water via storm water runoff and/or through the Earth’s crust. Water treatment processes can also lead to the presence of some minerals. Examples of minerals in water can include: calcium, zinc, manganese, phosphate, fluoride and sodium compounds. Water with high levels of minerals is referred to as “hard water” and water with low levels of minerals is referred to as “soft water”. The World Health Organization says that “there does not appear to be any convincing evidence that water hardness causes adverse health effects in humans”.[1] In fact, the United States National Research Council has found that hard water can actually serve as a dietary supplement for calcium and magnesium. Some other elements such as fluoride, while beneficial in low concentrations, can cause dental problems and other issues when present at high levels. Appliances and faucets do tend to accumulate minerals in areas that have hard water. This causes some people to invest in “water softeners” which lower the mineral content of the water. A fountain in Saint-Paul-de-Vence, France. The sign reading Eau potable indicates that the water is safe to drink.

Fluid balance is key. Profuse sweating can increase the need for electrolyte (salt) replacement. Water intoxication (which results in hyponatremia), the process of consuming too much water too quickly, can be fatal.

Water covers some 70% of the Earth’s surface. Approximately 97.2% of it is saline, just 2.8% fresh. Potable water is available in almost all populated areas of the Earth, although it may be expensive and the supply may not always be sustainable. Sources where water may be obtained include:

Springs are often used as sources for bottled waters. Tap water, delivered by domestic water systems in developed nations, refers to water piped to homes and delivered to a tap or spigot. For these water sources to be consumed safely they must receive adequate treatment and meet drinking water regulations. The most efficient way to transport and deliver potable water is through pipes. Plumbing can require significant capital investment. Some systems suffer high operating costs. The cost to replace the deteriorating water and sanitation infrastructure of industrialized countries may be as high as $200 billion a year. Leakage of untreated and treated water from pipes reduces access to water. Leakage rates of 50% are not uncommon in urban systems. Only 61 percent of people in Sub-Saharan Africa have improved drinking water. Drinking water vending machines in Thailand. One liter of potable water is sold (into the customer’s own bottle) for 1 baht.

Because of the high initial investments, many less wealthy nations cannot afford to develop or sustain appropriate infrastructure, and as a consequence people in these areas may spend a correspondingly higher fraction of their income on water. 2003 statistics from El Salvador, for example, indicate that the poorest 20% of households spend more than 10% of their total income on water. In the United Kingdom authorities define spending of more than 3% of one’s income on water as a hardship.

Sixty million people are estimated to have been poisoned by well water contaminated by excessive fluoride, which dissolved from granite rocks. The effects are particularly evident in the bone deformations of children. Similar or larger problems are anticipated in other countries including China, Uzbekistan, and Ethiopia. Although helpful for dental health in low dosage, fluoride in large amounts interferes with bone formation.

Physical and chemical parameters include heavy metals, trace organic compounds, total suspended solids (TSS), and turbidity. Microbiological parameters include Coliform bacteria, E. coli, and specific pathogenic species of bacteria (such as cholera-causing Vibrio cholerae), viruses, and protozoan parasites. Chemical parameters tend to pose more of a chronic health risk through buildup of heavy metals although some components like nitrates/nitrites and arsenic can have a more immediate impact. Physical parameters affect the aesthetics and taste of the drinking water and may complicate the removal of microbial pathogens. 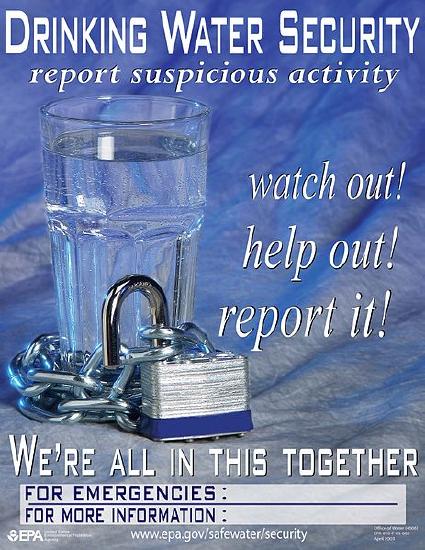 Originally, fecal contamination was determined with the presence of coliform bacteria, a convenient marker for a class of harmful fecal pathogens. The presence of fecal coliforms (like E. Coli) serves as an indication of contamination by sewage. Additional contaminants include protozoan oocysts such as Cryptosporidium sp., Giardia lamblia, Legionella, and viruses (enteric). Microbial pathogenic parameters are typically of greatest concern because of their immediate health risk.

Throughout most of the world, the most common contamination of raw water sources is from human sewage and in particular human faecal pathogens and parasites. In 2006, waterborne diseases were estimated to cause 1.8 million deaths each year while about 1.1 billion people lacked proper drinking water. It is clear that people in the developing world need to have access to good quality water in sufficient quantity, water purification technology and availability and distribution systems for water. In many parts of the world the only sources of water are from small streams often directly contaminated by sewage.