The concept of functional groups is a very important one. We expect that you will need to refer back to tables at the end of Section 3.1 quite frequently at first, as it is not really feasible to learn the names and structures of all the functional groups and compound types at one sitting. Gradually they will become familiar, and eventually you will recognize them automatically.

As we progress in our study of organic chemistry, it will become extremely important to be able to quickly recognize the most common functional groups, because they are the key structural elements that define how organic molecules react. For now, we will only worry about drawing and recognizing each functional group, as depicted by Lewis and line structures. Much of the remainder of your study of organic chemistry will be taken up with learning about how the different functional groups tend to behave in organic reactions.

The carbon-carbon triple bond in ethyne is the simplest example of an alkyne function group.

What about ethane? All we see in this molecule is carbon-hydrogen and carbon-carbon single bonds, so in a sense we can think of ethane as lacking a functional group entirely. However, we do have a general name for this ‘default’ carbon bonding pattern: molecules or parts of molecules containing only carbon-hydrogen and carbon-carbon single bonds are referred to as alkanes. If the carbon of an alkane is bonded to a halogen, the group is now referred to as a haloalkane (fluoroalkane, chloroalkane, etc.).  Chloroform, CHCl3, is an example of a simple haloalkane.

We have already seen the simplest possible example of an alcohol functional group in methanol.  In the alcohol functional group, a carbon is single-bonded to an OH group (this OH group, by itself, is referred to as a hydroxyl). If the central carbon in an alcohol is bonded to only one other carbon, we call the group a primary alcohol.  In secondary alcohols and tertiary alcohols, the central carbon is bonded to two and three carbons, respectively. Methanol, of course, is in class by itself in this respect.

The sulfur analog of an alcohol is called a thiol (the prefix thio, derived from the Greek, refers to sulfur).

In an ether functional group, a central oxygen is bonded to two carbons. Below are the line and Lewis structures of diethyl ether, a common laboratory solvent and also one of the first medical anaesthesia agents.

In sulfides, the oxygen atom of an ether has been replaced by a sulfur atom.

One of the most important properties of amines is that they are basic, and are readily protonated to form ammonium cations.

Because phosphates are so abundant in biological organic chemistry, it is convenient to depict them with the abbreviation ‘P’. Notice that this ‘P’ abbreviation includes the oxygen atoms and negative charges associated with the phosphate groups.

There are a number of functional groups that contain a carbon-oxygen double bond, which is commonly referred to as a carbonyl. Ketones and aldehydes are two closely related carbonyl-based functional groups that react in very similar ways. In a ketone, the carbon atom of a carbonyl is bonded to two other carbons. In an aldehyde, the carbonyl carbon is bonded on one side to a hydrogen, and on the other side to a carbon. The exception to this definition is formaldehyde, in which the carbonyl carbon has bonds to two hydrogens.

As the name implies, carboxylic acids are acidic, meaning that they are readily deprotonated to form the conjugate base form, called a carboxylate (much more about carboxylic acids in the acid-base chapter!).

In amides, the carbonyl carbon is bonded to a nitrogen. The nitrogen in an amide can be bonded either to hydrogens, to carbons, or to both. Another way of thinking of an amide is that it is a carbonyl bonded to an amine.

In esters, the carbonyl carbon is bonded to an oxygen which is itself bonded to another carbon. Another way of thinking of an ester is that it is a carbonyl bonded to an alcohol. Thioesters are similar to esters, except a sulfur is in place of the oxygen.

Finally, in a nitrile group, a carbon is triple-bonded to a nitrogen. Nitriles are also often referred to as cyano groups.

A single compound often contains several functional groups. The six-carbon sugar molecules glucose and fructose, for example, contain aldehyde and ketone groups, respectively, and both contain five alcohol groups (a compound with several alcohol groups is often referred to as a ‘polyol’).

While not in any way a complete list, this section has covered most of the important functional groups that we will encounter in biological and laboratory organic chemistry. The table on the inside back cover provides a summary of all of the groups listed in this section, plus a few more that will be introduced later in the text.

1: Identify the functional groups in the following organic compounds. State whether alcohols and amines are primary, secondary, or tertiary. 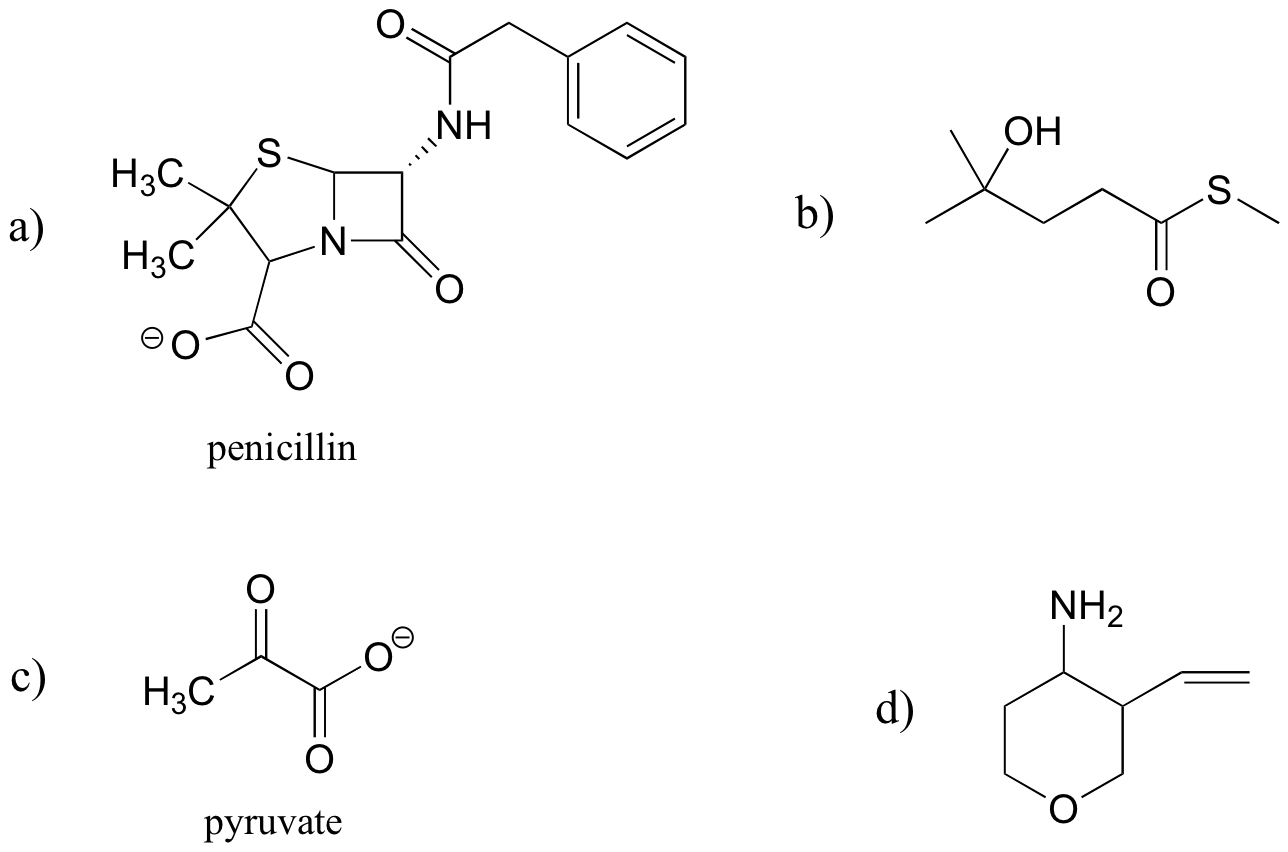 2: Draw one example each (there are many possible correct answers) of compounds fitting the descriptions below, using line structures.  Be sure to designate the location of all non-zero formal charges. All atoms should have complete octets (phosphorus may exceed the octet rule).

Show Answer
a) carboxylate, sulfide, aromatic, two amide groups (one of which is cyclic)

The following is the molecule for ATP, or the molecule responsible for energy in human cells. Identify the functional groups for ATP.