All alkenes undergo addition reactions with the hydrogen halides. A hydrogen atom joins to one of the carbon atoms originally in the double bond, and a halogen atom to the other. For example, with ethene and hydrogen chloride, you get chloroethane:

What happens if you add the hydrogen to the carbon atom at the right-hand end of the double bond, and the chlorine to the left-hand end? You would still have the same product. The chlorine would be on a carbon atom next to the end of the chain – you would simply have drawn the molecule flipped over in space. That would be different of the alkene was unsymmetrical – that’s why we have to look at them separately.

The addition of hydrogen halides is one of the easiest electrophilic addition reactions because it uses the simplest electrophile: the proton. Hydrogen halides provide both a electrophile (proton) and a nucleophile (halide). First, the electrophile will attack the double bond and take up a set of ππ electrons, attaching it to the molecule (1). This is basically the reverse of the last step in the E1 reaction (deprotonation step). The resulting molecule will have a single carbon-carbon bond with a positive charge on one of them (carbocation). The next step is when the nucleophile (halide) bonds to the carbocation, producing a new molecule with both the original hydrogen and halide attached to the organic reactant (2). The second step will only occur if a good nucleophile is used.

Figure 1: Mechanism of Electrophilic Addition of Hydrogen Halide to Ethene

Figure 2: Mechanism of Electrophilic Addition of Hydrogen Halide to Propene

All of the halides (HBr, HCl, HI, HF) can participate in this reaction and add on in the same manner. Although different halides do have different rates of reaction, due to the H-X bond getting weaker as X gets larger (poor overlap of orbitals)s.

Variation of rates when you change the halogen

Reaction rates increase in the order HF – HCl – HBr – HI. Hydrogen fluoride reacts much more slowly than the other three, and is normally ignored in talking about these reactions. When the hydrogen halides react with alkenes, the hydrogen-halogen bond has to be broken. The bond strength falls as you go from HF to HI, and the hydrogen-fluorine bond is particularly strong. Because it is difficult to break the bond between the hydrogen and the fluorine, the addition of HF is bound to be slow.

Variation of rates when you change the alkene

This applies to unsymmetrical alkenes as well as to symmetrical ones. For simplicity the examples given below are all symmetrical ones- but they don’t have to be. Reaction rates increase as the alkene gets more complicated – in the sense of the number of alkyl groups (such as methyl groups) attached to the carbon atoms at either end of the double bond.

There are two ways of looking at the reasons for this – both of which need you to know about the mechanism for the reactions. Alkenes react because the electrons in the pi bond attract things with any degree of positive charge. Anything which increases the electron density around the double bond will help this.

Alkyl groups have a tendency to “push” electrons away from themselves towards the double bond. The more alkyl groups you have, the more negative the area around the double bonds becomes. The more negatively charged that region becomes, the more it will attract molecules like hydrogen chloride. The more important reason, though, lies in the stability of the intermediate ion formed during the reaction. The three examples given above produce these carbocations (carbonium ions) at the half-way stage of the reaction:

In terms of reaction conditions and the factors affecting the rates of the reaction, there is no difference whatsoever between these alkenes and the symmetrical ones described above. The problem comes with the orientation of the addition – in other words, which way around the hydrogen and the halogen add across the double bond.

If HCl adds to an unsymmetrical alkene like propene, there are two possible ways it could add. However, in practice, there is only one major product.

This is in line with Markovnikov’s Rule which says:

When a compound HX is added to an unsymmetrical alkene, the hydrogen becomes attached to the carbon with the most hydrogens attached to it already.

If more than one reaction could occur between a set of reactants under the same conditions giving products that are constitutional isomers and if one product forms in greater amounts than the others, the overall reaction is said to be regioselective.

Say three reactions could occur between the hypothetical reactants A and B under the same conditions giving the constitutionally isomeric products C, D, and E. There are two possibilities:

1. The three products form in equal amounts, i.e., of the total product 33% is C, another 33% D, the remaining 33% E.  (These percentages are called relative yields of the products.) If this is what is observed, the overall reaction between A and B is not regioselective. If this is what is observed, the overall reaction between A and B is regioselective. 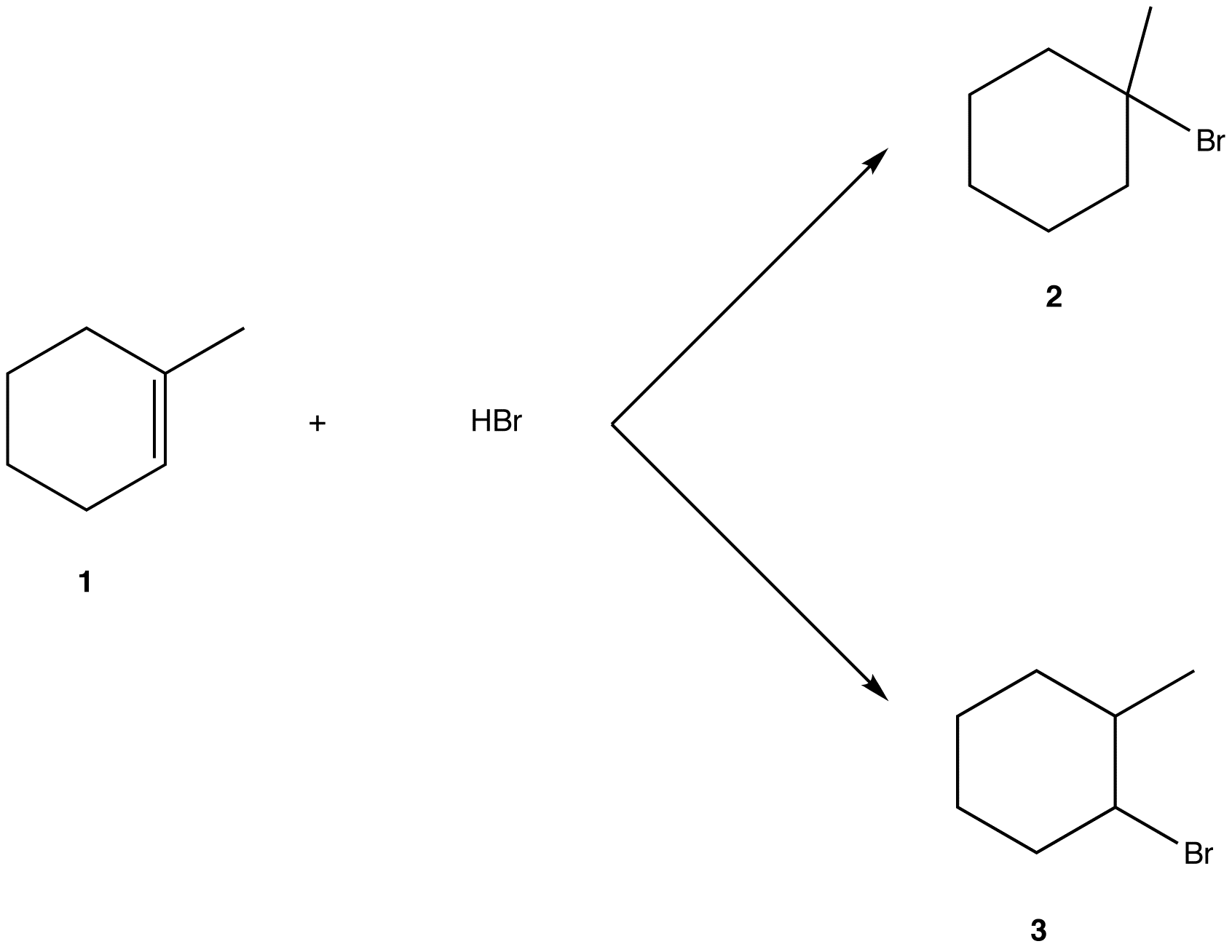 Experimentally, 2 is the major product; 3 is the minor product.  Thus, the overall reaction between 1 and HBr is regioselective toward 2.

If more than one reaction could occur between a set of reactants under the same conditions giving products that are constitutional isomers and if only one product is observed, the overall reaction is said to be 100% regioselective or regiospecific. The only observed product is 5.  (Relative yields of 5 and 6 are 100% and 0%, respectively.)  Thus the overall reaction between 4 and HBr is regiospecific toward 5.

Predict the product(s) for the following reactions:

In each case, suggest an alkene that would give the product shown.