Sometimes, even when formal charges are considered, the bonding in some molecules or ions cannot be described by a single Lewis structure. Such is the case for ozone (O3), an allotrope of oxygen with a V-shaped structure and an O–O–O angle of 117.5°.

1. We know that ozone has a V-shaped structure, so one O atom is central:

3. Assigning one bonding pair of electrons to each oxygen–oxygen bond gives

with 14 electrons left over.

4. If we place three lone pairs of electrons on each terminal oxygen, we obtain

and have 2 electrons left over.

5. At this point, both terminal oxygen atoms have octets of electrons. We therefore place the last 2 electrons on the central atom:

6. The central oxygen has only 6 electrons. We must convert one lone pair on a terminal oxygen atom to a bonding pair of electrons—but which one? Depending on which one we choose, we obtain either

Which is correct? In fact, neither is correct. Both predict one O–O single bond and one O=O double bond. As you will learn, if the bonds were of different types (one single and one double, for example), they would have different lengths. It turns out, however, that both O–O bond distances are identical, 127.2 pm, which is shorter than a typical O–O single bond (148 pm) and longer than the O=O double bond in O2 (120.7 pm)

Before the development of quantum chemistry it was thought that the double-headed arrow indicates that the actual electronic structure is an average of those shown, or that the molecule oscillates between the two structures.  Today we know that the electrons involved in the double bonds occupy an orbital that extends over all three oxygen molecules, combining p orbitals on all three. 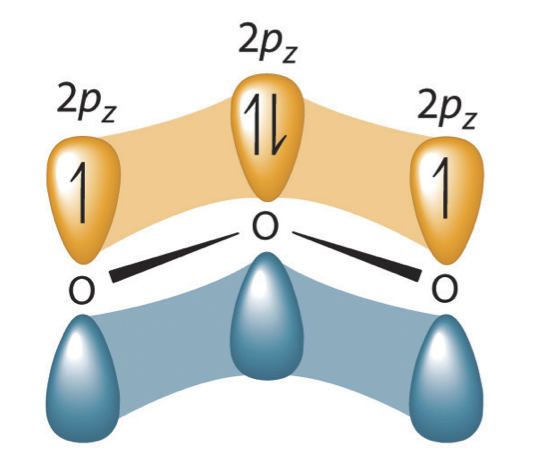 We will discuss the formation of these molecular orbitals in the next chapter but it is important to understand that resonance structures are based on molecular orbitals not averages of different bonds between atoms.  We describe the electrons in such molecular orbitals as being delocalized, that is they cannot be assigned to a bond between two atoms.

When it is possible to write more than one equivalent resonance structure for a molecule or ion, the actual structure involves a molecular orbital which is a linear combination of atomic orbitals from each of the atoms.

Like ozone, the electronic structure of the carbonate ion cannot be described by a single Lewis electron structure. Unlike O3, though, the Lewis structures describing CO32− has three equivalent representations.

1. Because carbon is the least electronegative element, we place it in the central position:

3. Six electrons are used to form three bonding pairs between the oxygen atoms and the carbon:

4. We divide the remaining 18 electrons equally among the three oxygen atoms by placing three lone pairs on each and indicating the −2 charge:

5. No electrons are left for the central atom.

6. At this point, the carbon atom has only 6 valence electrons, so we must take one lone pair from an oxygen and use it to form a carbon–oxygen double bond. In this case, however, there are three possible choices:

As with ozone, none of these structures describes the bonding exactly. Each predicts one carbon–oxygen double bond and two carbon–oxygen single bonds, but experimentally all C–O bond lengths are identical. We can write resonance structures (in this case, three of them) for the carbonate ion:

As the case for ozone, the actual structure involves the formation of a molecular orbital from pz orbitals centered on each atom and sitting above and below the plane of the CO32− ion.

Benzene is a common organic solvent that was previously used in gasoline; it is no longer used for this purpose, however, because it is now known to be a carcinogen. The benzene molecule (C6H6) consists of a regular hexagon of carbon atoms, each of which is also bonded to a hydrogen atom. Use resonance structures to describe the bonding in benzene.

A Draw a structure for benzene illustrating the bonded atoms. Then calculate the number of valence electrons used in this drawing.

B Subtract this number from the total number of valence electrons in benzene and then locate the remaining electrons such that each atom in the structure reaches an octet.

Each carbon atom in this structure has only 6 electrons and has a formal charge of +1, but we have used only 24 of the 30 valence electrons.

B If the 6 remaining electrons are uniformly distributed pairwise on alternate carbon atoms, we obtain the following:

C There are, however, two ways to do this:

Each structure has alternating double and single bonds, but experimentation shows that each carbon–carbon bond in benzene is identical, with bond lengths (139.9 pm) intermediate between those typically found for a C–C single bond (154 pm) and a C=C double bond (134 pm). We can describe the bonding in benzene using the two resonance structures, but the actual electronic structure is an average of the two. The existence of multiple resonance structures for aromatic hydrocarbons like benzene is often indicated by drawing either a circle or dashed lines inside the hexagon:

This combination of p orbitals for benzene can be visualized as a ring with a node in the plane of the carbon atoms.

The sodium salt of nitrite is used to relieve muscle spasms. Draw two resonance structures for the nitrite ion (NO2−).

Resonance structures are particularly common in oxoanions of the p-block elements, such as sulfate and phosphate, and in aromatic hydrocarbons, such as benzene and naphthalene.

Benzene is an extremely stable molecule and it is accounted for its geometry and molecular orbital interaction, but most importantly it’s due to its resonance structures. The delocalized electrons in the benzene ring make the molecule very stable and with its characteristics of a nucleophile, it will react with a strong electrophile only and after the first reactivity, the substituted benzene will depend on its resonance to direct the next position for the reaction to add a second substituent.

The next molecule, the Amide, is a very stable molecule that is present in most biological systems, mainly in proteins. By studies of NMR spectroscopy and X-Ray crystallography it is confirmed that the stability of the amide is due to resonance which through molecular orbital interaction creates almost a double bond between the Nitrogen and the carbon.

Molecules with more than one resonance form

Some structural resonance conformations are the major contributor or the dominant forms that the molecule exists. For example, if we look at the above rules for estimating the stability of a molecule, we see that for the third molecule the first and second forms are the major contributors for the overall stability of the molecule. The nitrogen is more electronegative than carbon so, it can handle the negative charge more than carbon. A carbon with a negative charge is the least favorable conformation for the molecule to exist, so the last resonance form contributes very little for the stability of the Ion.

The Hybrid Resonance forms show the different Lewis structures with the electron been delocalized. This is very important for the reactivity of chloro-benzene because in the presence of an electrophile it will react and the formation of another bond will be directed and determine by resonance. The long pair of electrons delocalized in the aromatic substituted ring is where it can potentially form a new bond with an electrophile, as it is shown there are three possible places that reactivity can take place, the first to react will take place at the para position with respect to the chloro substituent and then to either ortho position.Sharon Wei (UCD), Liza Chu (UCD)