The limitations of the cis-trans system are illustrated in the examples given below.

Note: The priority rules are often called the Cahn-Ingold-Prelog (CIP) rules, after the chemists who developed the system

In simple cases, such as 2-butene, Z corresponds to cis and E to trans. However, that is not a rule. This section and the following one illustrate some idiosyncrasies that happen when you try to compare the two systems. The real advantage of the E-Z system is that it will always work. In contrast, the cis-trans system breaks down with many ambiguous cases.

The following figure shows two isomers of an alkene with four different groups on the double bond, 1-bromo-2-chloro-2-fluoro-1-iodoethene.

It should be apparent that the two structures shown are distinct chemicals. However, it is impossible to name them as cis or trans. On the other hand, the E-Z system works fine… Consider the left hand structure. On C1 (the left end of the double bond), the two atoms attached to the double bond are Br and I. By the CIP priority rules, I is higher priority than Br (higher atomic number). Now look at C2. The atoms are Cl and F, with Cl being higher priority. We see that the higher priority group is “down” at C1 and “down” at C2. Since the two priority groups are both on the same side of the double bond (“down”, in this case), they are zusammen = together. Therefore, this is the (Z) isomer. Similarly, the right hand structure is (E).

Consider the molecule shown at the left.

This is 2-bromo-2-butene — ignoring the geometric isomerism for now. Cis or trans? This molecule is clearly cis. The two methyl groups are on the same side. More rigorously, the “parent chain” is cis.

Note: This example should convince you that cis and Z are not synonyms. Cis/trans and E,Z are determined by distinct criteria. There may seem to be a simple correspondence, but it is not a rule. Be sure to determine cis,trans or E,Z separately, as needed.

If the compound contains more than one double bond, then each one is analyzed and declared to be E or Z.

The double-bond rule in determining priorities

Consider the compound below

The “first point of difference” rule

Which is higher priority, by the CIP rules: a C with an O and 2 H attached to it or a C with three C?  The first C has one atom of high priority but also two atoms of low priority. How do these “balance out”? Answering this requires a clear understanding of how the ranking is done. The simple answer is that the first point of difference is what matters; the O wins.

At the right hand end, the first atom attached to the double bond is a C at each position. A tie, so we look at what is attached to this first C. For the upper C, it is CCC (since the triple bond counts three times). For the lower C, it is OHH — listed in order from high priority atom to low. OHH is higher priority than CCC, because of the first atom in the list. That is, the O of the lower group beats the C of the upper group. In other words, the O is the highest priority atom of any in this comparison; thus the O “wins”.

Therefore, the high priority groups are “up” on the left end (the -Br) and “down” on the right end (the -CH2-O-CH3). This means that the isomer shown is opposite = entgegen = E. And what is the name? The “name” feature of ChemSketch says it is (2E)-2-(1-bromoethylidene)pent-3-ynyl methyl ether.

A common method for preparing oxygen is the

A system that is easy to use and which is based on the sequence rules already described for the R,S system works as follows:

The Z isomer is designated as the isomer in which the top priority groups are on the same side (Z is taken from the German word zusammen- together). The E isomer has these groups on opposite sides (E, German for entgegen across). Two further examples show how the nomenclature is used:

Order the following in increasing priority.

Label the following as E or Z conformations. 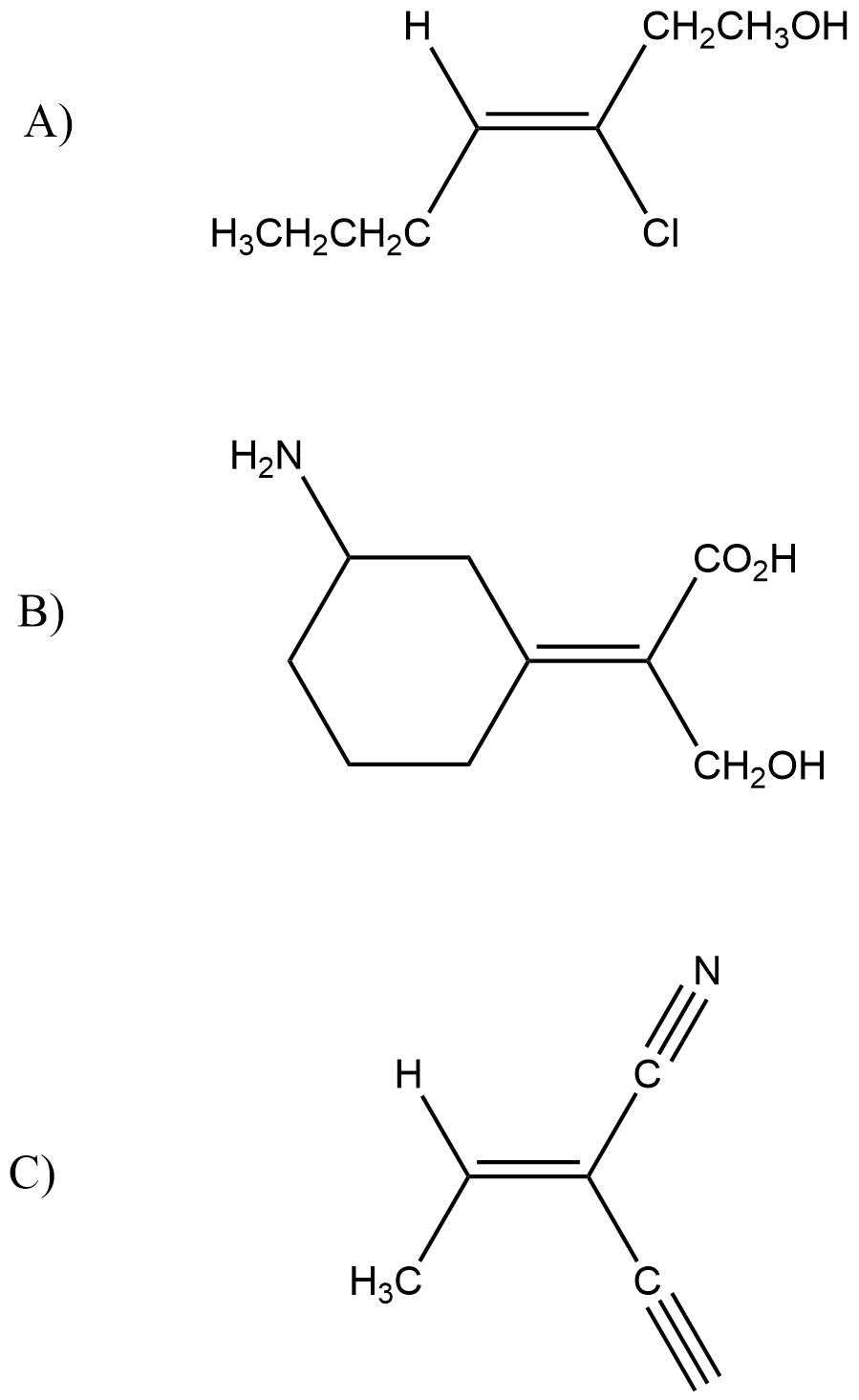