Eyes receive light energy then transfer and passing the energy into neural impulses to brain. This page will show the role of light plays in vision.

Light is one of the most important resources for civilization, it provides energy as it pass along by the sun. Light influence our everyday live. Living organisms sense light from the environment by photoreceptors. Light, as waves carry energy, contains energy by different wavelength. In vision, light is the stimulus input.  Light energy goes into eyes stimulate photoreceptor in eyes.  However, as an energy wave, energy is passed on through light at different wavelength. 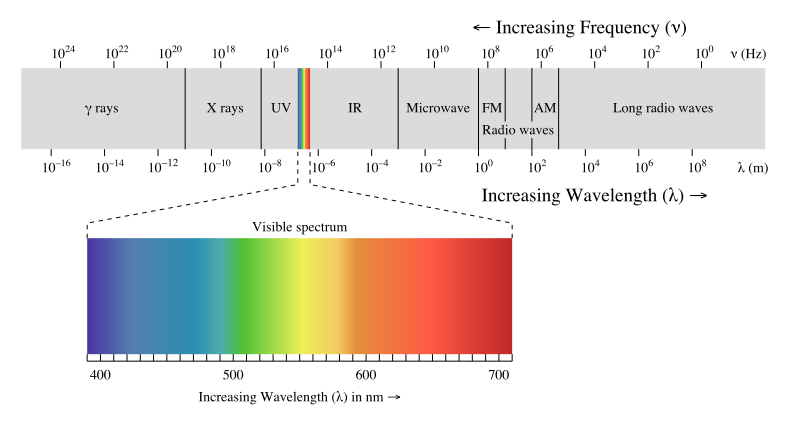 Light energy can convert chemical to other forms. Vitamin A, also known as retinol, anti-dry eye vitamins, is a required nutrition for human health. The predecessor of vitamin A is present in the variety of plant carotene. Vitamin A is critical for vision because it is needed by the retina of eye. Retinol can be convert to retinal, and retinal is a chemical necessary for rhodopsin. As light enters the eye, the 11-cis-retinal is isomerized to the all-“trans” form. 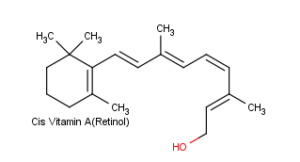 We now know in rhodopsin, there is protein and retinal. The large protein is called opsin. Opsin does not absorb visible light, but when it bonded with 11-cis-retinal by its lysine side-chain to from rhodopsin, the new molecule has a very broad absorption band in the visible region of the spectrum.

The reaction above shows Lysine side-chain from the opsin react with 11-cis-retinal when stimulated.  By removing the oxygen atom form the retinal and two hydrogen atom form the free amino group of the lysine, the linkage show on the picture above is formed, and it is called Schiff base.

The molecule cis-retinal can absorb light at a specific wavelength. When visible light hits the cis-retinal, the cis-retinal undergoes an isomerization, or change in molecular arrangement, to all-trans-retinal. The new form of trans-retinal does not fit as well into the protein, and so a series of geometry c

hanges in the protein begins. The resulting complex is referred to a bathrhodopsin (there are other intermediates in this process, but we’ll ignore them for now). 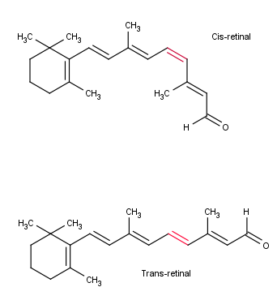 As the protein changes its geometry, it initiates a cascade of biochemical reactions that results in changes in charge so that a large potential difference builds up across the plasma membrane. This potential difference is passed along to an adjoining nerve cell as an electrical impulse. The nerve cell carries this impulse to the brain, where the visual information is interpreted.